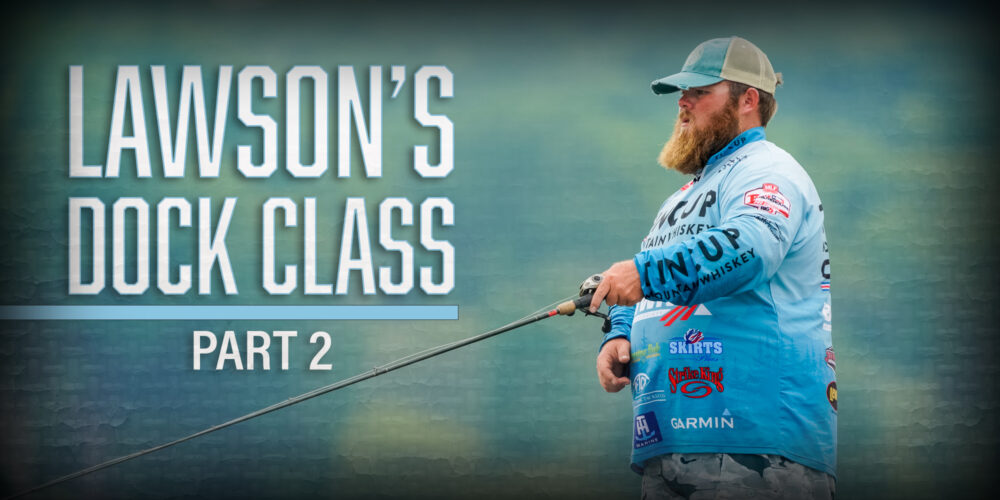 If you haven’t read the first part of this series, you better take a minute to check it out because when Lawson Hibdon talks dock fishing, you better listen. Lawson has spent his life in a boat watching and learning from his grandpa, Guido, and his father, Dion, who built their careers off of catching bass from boat docks. With Lawson being the newest member to join the professional ranks after just wrapping up his rookie campaign on the Tackle Warehouse Pro Circuit Presented by Bad Boy Mowers, he’s had a little more time on his hands with the tournament season winding down. So he decided to shed some light on one of the family’s favorite ways to catch a bass – skipping docks.

For the final installment of tips from Lawson, he dives into more of the gear and how-to portion of skipping floating docks.

Perfect the Art of Skipping

Fishing a boat dock effectively isn’t easy if you don’t know how to skip a bait. Lawson admits there’s no secret recipe to learning other than time on the water. When it comes to equipment, using what you’re comfortable with versus what you “should be using” goes a long way in learning how to skip.

“If you learn how to skip under a dock that’s going to be the best way to fish them,” Lawson admits. “There are so many situations where if you can make a good cast, you’ll catch a lot more fish. We take pride in making perfect casts to those fish. It takes a lot of practice and a lot of time on the water to be able to put your bait where it needs to go and how it needs to go in quietly.

“There’s no such thing as the perfect skipping rod for everybody. Andy Montgomery is one of the best in the country and he uses a 7-foot rod or a 7-foot, 1-inch rod, and if I pick up a 7-footer, I can’t hit anything. It’s like completely foreign ground to me. I like a 7-foot, 3-inch medium-heavy rod 99 percent of the time. You got to use a rod that you’re real comfortable with and a reel that you’re comfortable with. The more comfortable you get, the more you’ll be able to back off [the spool tension] on the reel. Me and my fishing partner here at home use basically the same gear as each other and I can’t pick up one of his rods and skip with it because he keeps his reels a lot tighter than I do. He’s just as good at putting his bait where it needs to go, but he’s got a whole different way of doing it.”

When it comes to actually making the skip, Lawson goes about it a little differently than most.

“I like a roll cast when I’m skipping, and all you do is basically roll your bait over the end of your rod,” he says. “It’s hard to explain, but you roll the bait over the end of the rod and keep that rod tip going in an upward direction the entire time and that lifts the bait off the water. That way when it hits the water for the first time, it’ll keep skipping better. It’s like a golf swing or shooting a bow, you just follow through with the cast.

“My brother is a lot more forceful when he skips compared to me and my dad, so when he messes up, his reel is going to require scissors and some new line. We’re more finesse-y with it than a lot of people and that also helps present the bait a little quieter, and I think that helps you get a few more bites. But you’ve just got to get out there and do it repetitively to learn. Once you get your cast down, just keep doing it over and over. You won’t learn it overnight or even after two or three trips. It’s going to take you a while to get it down.”

While actually skipping a bait under a dock will put the bait where it needs to be, Lawson also believes skipping can help attract fish to your bait.

“Fishing a dock isn’t about how you get your bait under there, it’s about how you present it,” he says. “Skipping it definitely gets their attention. We’ve watched it time after time where you’ll skip it under a HydroHoist lift and by the time it hits the water the last time he’s already got it. I definitely think that comes into play. If you just pitch it up under there it makes a little sploosh and he might still eat it, but he’s going to track it to the bottom and look it over before he does. When you skip it and it bounces three or four times, it gets his attention and he just reacts to it.”

Learn to Love a Jig

When it comes to actually fishing a dock, Lawson believes you can throw just about anything at a dock, but for him, a jig gets the call day in and day out.

“We really try to keep it pretty simple,” Lawson says of picking a bait. “There’s 100 different baits you can catch fish off a boat dock from, but we lean more towards a jig. A jig is the most efficient way of fishing a floating dock in my opinion.”

The jig Lawson reaches for the majority of the time is a 3/8- or 1/2-ounce Arkie-style head simply because the flatter head helps it to skip better. For a trailer, he likes beaver-style plastics to complete the perfect skipping package. But that’s not the only reason he likes them.

“A beaver trailer imitates bluegill the best,” Lawson says. “I don’t feel like a bluegill is out there flapping around going nuts. He’s swimming around nonchalant and darts up under the dock. When they feed on more bluegill than crawdads, I’ll take a 3/8-ounce Arkie-style head, so that it’s flat on the bottom to help it skip good and I’ll put a full-sized beaver bait up on it like a Reaction Innovations Sweet Beaver or Strike King Rodent.”

Though that setup works most of the year for Lawson, he does change his jig and trailer when he feels fish are feeding more heavily on crawdads, especially in cooler water.

“In the spring [and winter], I use a 5/16-ounce to 3/8, 1/2 on the heavy side, but it’s just a little ball head jig,” Lawson says. “With a short collar, with a crawdad imitator on it like a Guido Bug style trailer or a Reaction Innovations Smallie Beaver. I’d say 90 percent of the time it’s going to be brown. It seems to catch them everywhere you go. Or green pumpkin.”

Don’t Shy Away From Bigger Line

One of the biggest things Lawson sees people doing that costs them fish when targeting bass under docks is using too light of line.

“Very seldom do we use less than 20-pound [fluorocarbon] skipping under a boat dock,” Lawson says. “I don’t feel like when they’re standing in the shade that they’re fickle. Even on lakes like Table Rock and Bull Shoals where you can see 15-foot deep, I still feel like if you’re throwing at them in the shade, 90 percent of the time he’s not going to shy away from your bait because of line size.

“The only reason I’ll switch line sizes is to present my bait differently. If I need to throw 15-pound on a little, tiny jig I’m going to, but it’s not because I’m worried about them being spooky of my line. It’s more about getting my bait to present properly.”

Lawson is quick to point out that the fall rate of a jig can have a huge impact on triggering fish to bite. Still, bigger fluorocarbon rigged on different rods allows Lawson to adjust throughout the day to find exactly what the fish want.

“I switch line size more than jig size,” he says. “So, I might have a 1/2-ounce jig on 20-pound line on one rod and the same jig on 25-pound on another for different situations.”

Give It a Try

If you’ve never skipped a dock for bass, or you’re needing to practice your skipping skills, there’s no better time to get out and try it. Docks can provide a smorgasbord of dining opportunities for bass in any lake in the country, which is why many professional anglers, including the Hibdons, never let one get overlooked.

“We seek them out everywhere we go,” Lawson says of docks. “If there’s a boat dock on a lake, I’m going to find it and throw my bait under it and around it at some point. Big fish do live around them. I hear people talk about going to fish docks if they need a limit, which I do, but also you can catch big ones doing it. That’s where they live.”