Loberg Building Steam, Leads Top 10 into Final Round on Pickwick 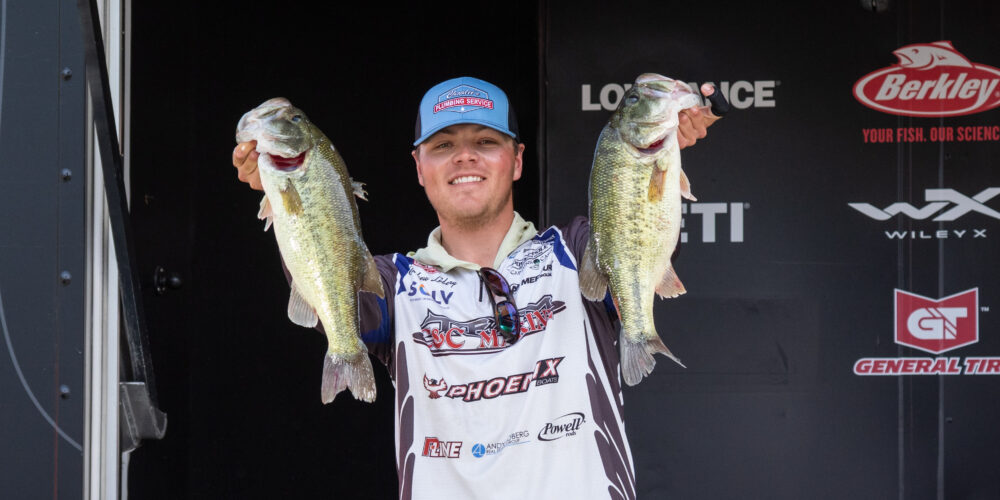 COUNCE, Tenn. – There’s usually a bit of a learning curve for Tackle Warehouse Pro Circuit Presented by Fuel Me rookies, especially ones from out west. Seems Andrew Loberg’s was one tournament, because the young pro has now led back-to-back events after three days.

Well, after scraping out an 18-pound, 11-ounce limit today for Lithium Pros Stop 3 on Pickwick Lake Presented by Covercraft, he’s again put himself in the lead and in position to fish for up to $135,000. Of course, his 52-8 total doesn’t mean much, as the weights are zeroed tomorrow, but still, to have such success so early has been an enjoyable surprise.

“I’m stoked,” Loberg said. “It’s kind of a weird feeling. I’m leading, but it doesn’t feel like it. I still have some work to do. But I’m super fired up about how whole week went. It’s been fun.”

Of course, he says it’s been fun now that he’s made it to Sunday, but there was quite the stretch today when it was anything but fun for him.

All week, Loberg has mainly focused on a shallow grass flat closer to Florence, Ala., but he hasn’t been the only one. Jon Canada hung in there the first day and a half, Justin Lucas has committed there all three days, and a number of other pros cycled through at various times. Not to mention a handful of boats from a high school tournament that fished today.

That pressure seemingly took its toll, as Loberg was able to box up 14 pounds on four fish relatively early this morning before getting stuck searching for his fifth for hours.

“I wasn’t worried [after I had 14 pounds early],” Loberg said. “I had four whatever hours to hang in there and catch one more, but it just never happened.

“Around noon, I left for another spot semi close. I figured I had enough time to run there, fish it for 20 minutes and run back to see if there was a late-in-the-day thing on my main spot. Fortunately, I caught a 4-pounder on that second pattern. So, after that I was done. I knew I had enough.”

Of course, having “enough” is relative, and Loberg admits he’s certainly worried about his main area going into tomorrow. Getting as many bites from catfish and drum as keeper bass will do that.

That said, the young pro knows this lake is no stranger to pressure, and he feels there’s still enough bait and fish that if the conditions and pressure get right, it can still produce on Sunday. And if not, he’ll adjust.

“I’ll start in there, and if I can catch some fish great,” Loberg said. “But I’m going to play it by ear. I can’t just die there. I’m going to battle.

“I led at the Harris Chain and got second. I have to seal the deal this time and hopefully take the W. It’s pretty exciting stuff.”

Ron Nelson is definitely taking it easy so far, and his weight of 51-1 saw him come out of Saturday in the runner-up spot. You know things are going well when you can lose an 8-plus-pounder and not really worry about it, because that’s what the Michigan pro did today.

About mid-morning, Nelson loaded up on a bass that he felt was a giant and then was quickly confirmed when she rolled far out. Then, something odd happened.

“It was so weird,” Nelson said of his big bite. “It loaded up on the ChatterBait. So, I knew she ate it. Then it felt right, felt right, and she boiled. Then all of a sudden, the rod let up, and next it felt like I had a catfish. So, she came up, and the Chatterbait was in her back. So when she jumped, she came off.”

Unfortunately, it wasn’t the only lost fish today, as Nelson admits he nearly had a meltdown after losing his first five bites of the morning. Fortunately, his transition area has been so good, it didn’t matter, as he still sacked up 16 pounds, 10 ounces by the time he lost that giant.

Nelson says the spot has both prespawn fish coming in to spawn and postspawn fish stopping and looking to eat, which has allowed him to lean on the area so much since he doesn’t feel the fish will be there long and it will just keep reloading. And that’s also allowed him to not have to worry about sight fishing, which means he has a 5-pounder saved on a bed for tomorrow, already.

All of this seems to be lining up so perfectly Nelson should be quite excited. Yet, he knows the game well and has mixed feelings.

“I’m not excited,” Nelson said. “Yesterday, the fish didn’t leave the area. Today, with the high winds, I feel it blew the bait out of there. So, I might show up tomorrow and it’s a ghost town.

“I don’t want to get ahead of myself. I just know tomorrow I have a starting spot, and if they’re there, I’m good, and if not, I’ll make adjustments.”

Having something all to yourself has been a unicorn situation this week, but if anyone has it, it’s Jon Canada. Totalling 50-4 over three days, the Alabama pro made the Championship Sunday in third place.

As mentioned earlier, Canada started the tournament fishing the same shallow grass area Loberg has hunkered in this week. However, he hadn’t seen near the same success, as he only had two fish Friday at noon, prompting him to bail on it.

Fortunately, he has quite a bit of history on Pickwick and remembered a spot he felt might be worth checking. Well, 45 minutes after checking it, he left with almost 20 pounds. And guess what? Those fish were still there today.

“My little area is just a bar that has fish coming and going, some spawning,” Canada said. “And I just have a little deal that I hope I can keep going tomorrow.

And here’s the thing, he didn’t even hit the area when he thinks is the best time. When he worked through the area this morning, he felt like he was catching bucks and that the bigger fish will move in later in the day. Better yet, he knows there are multiple places like it in the region that can all produce.

“I can run around and do that pattern all over that area of the lake,” Canada said. “I caught 15 2 ½-pounders today. It’s amazing how I went from grinding and not catching them, to now it’s easy.”