Loberg Leads the Top 10 Into Final Day on Harris Chain 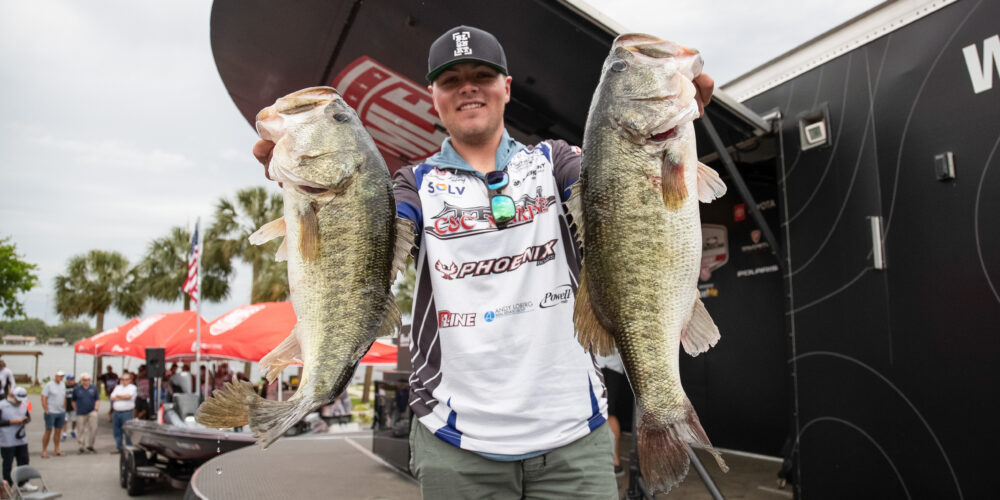 LEESBURG, Fla.– If the fishing on the final day is anything like it was on Day 3, tomorrow’s finish to Bass Boat Technologies Stop 2 on the Harris Chain of Lakes Presented by Frogg Toggs is going to be one for the record books. Jeff Reynolds and Michael Neal (he’s unstoppable!) both caught more than 27 pounds on Day 3, and Andrew Loberg tallied 22-10 on Day 3 for a 57-11 total that put him on top prior to the weights zeroing out on the final day.

One of the most consistent pros all week, Loberg put his best weight of the week on the scale today, which he believes is mostly due to the fact he’s getting more dialed in.

“I’ve said it a few times, but a lot of the style of fishing (in Florida) reminds me a lot of Clear Lake, which is kind of my home lake,” Loberg said. “Shallow grass, all the tules, dirty-ish water and I really like targeting postspawn fish and they love going to the grass after they spawn. So that’s what I started doing in practice.

“I found a few areas and really just capitalized on those areas and milked them each day. Which is good because I’ve learned more and more each day as I’ve fished about the spots and what’s going on.”

Doing his damage in Lake Eustis, Loberg has been making the most of the morning bite each day.

“The morning bite each day has been kind of my best deal, especially for a bigger bite,” said the former Chico State angler. “As the day goes on it seems like it’s harder to get multiple bites. It’s kind of one here, one there. But the weather is changing so much you kind of almost have to practice in your areas and figure out how they are going to bite with all the changing conditions.”

Given that the Top 10 starts with a clean slate tomorrow, Loberg knows he’s likely got to bust his biggest bag of the event to have a shot at winning. With what he’s learned over the course of three days firing reaction baits around his spots, he’s going to lean on his West Coast roots to try and help him seal the deal.

“I’ve learned where the sweet spots are on my areas,” he said. “I’m going to try to figure out some other baits to throw and I’m definitely going to be throwing a big swimbait tomorrow just to see if I can get bigger bites. Over 20 (pounds) is for sure going to win it, so I really need to capitalize on the morning and strategize with different baits because I’ve put a lot of pressure on those areas over the last few days.”

With wins at the college and Toyota Series levels under his belt, the 28-year-old pro is used to closing events, though he’s never fished a tournament of this magnitude. But in classic Loberg form, he’s excited for the challenge and ready to get back out and do what he loves – go fishing.

“I’m stoked,” he said. “Day 4, I’ve never really fished a four-day tournament before, it’s always been three for me, which is cool. I’m excited. Weights are zeroed and you just have to go out and fish your hardest and get what you get.”

Monster Day Has Neal at it Again

After winning Angler of the Year on the Pro Circuit in 2021, Neal carried some serious momentum into this season where he hasn’t slowed down yet. Claiming the trophy at Stop 1 on Sam Rayburn just last month, Neal is in position to go back-to-back.

The scariest part of Neal competing on the final day is the fact that he may have finally gotten dialed in on these Harris Chain bass.

“In practice I caught a 6, a 4 and like a 2 ½ in five casts on a place and the first day of the tournament I don’t think I even fished through there,” Neal said. “I don’t think I knew exactly what the area was and how it all laid, but now I’m really familiar with it. I went back yesterday and jumped off a big one and caught like a 4- or 5-pounder.

“I know the fish are there. How many are left, I don’t know. It’s not deep enough to where you can graph ‘em. You’ve just got to fish and the winning fish are there if you can get them to bite.”

Neal is confident in what he’s found, though he may have had to lean on it a bit too much to make up ground in order to try and rise from 31st into the Top 10.

“I never culled anything over a 2-pounder,” he said. “That’s why I stayed as long as I did. I had 21 pounds and I still had one less than 2 pounds, I caught that biggest one (almost 8 pounds) and that took me from 21 to 27 and I knew I was good and left.”

Known for his offshore prowess, Neal is utilizing that skillset to a degree, along with experience on the Harris Chain to be on the cusp of his second Pro Circuit win in as many events.

“Last year at the Bass Pro Tour event in May, all I did was fish offshore then and I came into this one with the mindset that I was going to fish just for postspawn fish offshore,” Neal said. “That’s why I did what I did and why I went where I went.

“I got three places I feel confident that I can catch a good-sized fish and one that I feel like I can win the tournament off of. It’d be nice to get another win. One thing I’ll tell you is I’ll be around the fish to do it. Whether or not I catch them or they bite, I don’t know, but they’ll be there.”

Though it wasn’t the biggest limit of the tournament, Jeff Reynolds’ 27-pound, 4-ounce bag today was more than enough to slide him from 44th into the Top 10.

While other pros in the Top 10 have been getting more dialed in as the event goes on, Reynolds has the weather more than anything to thank for his big bag.

“The first two days the wind blew too hard in the areas I was fishing to throw that topwater,” Reynolds said. “When I got in there today I was throwing that ChatterBait around trying to catch some and I couldn’t get it going. I thought I needed to tie that topwater on, I hadn’t thrown it in practice because the conditions hadn’t been right, but I thought if I got a bite it’d be a big one. I didn’t know I was going to get five of those, or however many I caught.

Less wind and some sunshine today presented Reynolds with the conditions he was looking for to bomb a River2Sea Whopper Plopper 130 around. It’s a bait he’s become very familiar with and used just last fall to make the Top 10 on Pickwick Lake in the Toyota Series Championship.

“A Whopper Plopper is one of my favorite baits to throw,” Reynolds said. “It’s one of them deals where fall is a really good time to throw it and postspawn. When them fish just get off the beds and haven’t really got back out to their summer places yet, it’s just a really good bait to catch some big fish.

“This time of year you don’t get a lot of bites on it, especially fishing the grass like I am, but normally when you get a bite it’s a big one.”

Focusing his efforts around taller clumps of hydrilla, which are loaded with bait, Reynolds utilizes the sun to help him see the clumps with his eyes to make precise casts. With no sun, he resorts to using LiveScope to make accurate casts. Tomorrow, with warmer weather, less wind and some rain, Reynolds hopes he can put the pieces together one more time.

“I don’t know if I can figure them out if we don’t have the same weather we had today,” he said. “The Plopper is the best way to catch big ones. If the wind don’t blow too hard I think they still might bite it. Florida fish I think like it more sunny and I think it’s supposed to rain all day tomorrow, so I don’t know. I can tell you this much, I’m going to have that Plopper in my hand a lot tomorrow.”