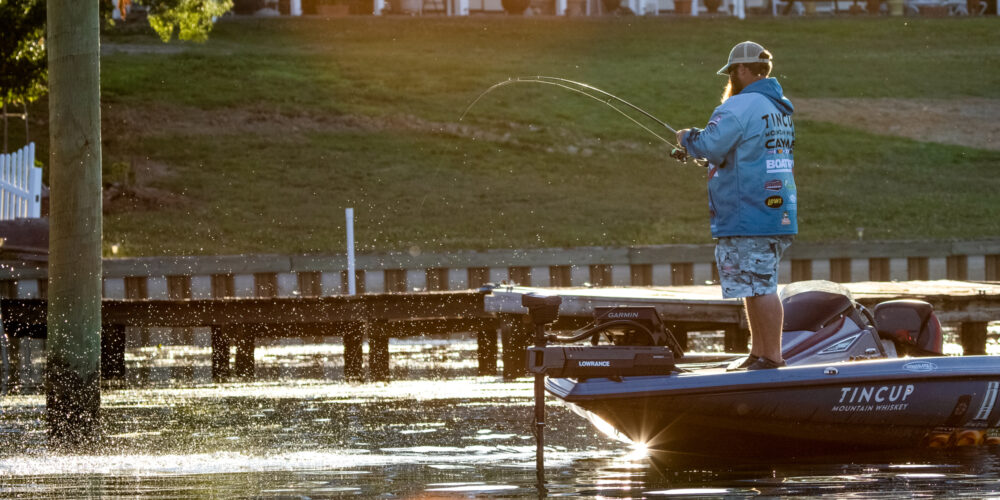 One thing about the Potomac River, you’ll never get bored following the lead changes on this historical tidal fishery. Just as soon as we poised to hit “publish” on the Midday Report, a wild card in the form of a 19-pound bag showed up on Day 2 of the second-to-last regular-season tournament on the 2021 Tackle Warehouse Pro Circuit schedule: Tennessee pro Ricky Robinson grabbed the unofficial lead with 19-0, giving him a total of 32-6 heading into the afternoon.

Catching Up with Day 1 Leaders

If you wanted a picture-perfect definition of an “odd couple,” all you had to do was look at the names in the top two spots on the leaderboard heading out onto the Potomac this morning: 26-year-old rookie Lawson Hibdon (17 pounds) and 64-year-old veteran Zell Rowland (16-15).

Stop 5 is Hibdon’s fifth as a tour-level pro; for Rowland – who cashed his first check with a major tournament organization 41 years ago – it’s his landmark 400th tour-level competition. Rowland has notched a handful of Top 10s in his career on the Potomac, Hibdon had never fished a tournament here from the front of the boat prior to the start of Federal Ammunition Stop 5 Presented by Lucas Oil.

Not that the fish care. Hibdon has remained near the top of the leaderboard by simply fishing what was in front of him, tide be darned. He put roughly 11 pounds in his livewell in the first hour of competition throwing moving baits, and then gradually upgraded to 16 in the afternoon with noticeably bigger fish on slower presentations.

The Missouri pro appears to be on about the same schedule today: As of the noon hour, Hibdon had 14 pounds on the day, boosting him to 31-0 overall. Rowland has lagged behind his Day 1 pace, however, and currently sits in 13th with 10-0.

Although Hibdon confessed that he doesn’t “know how to play the tide or none of that,” and he’s not purposely fishing around the tide, he’s doing exactly what you’re supposed to do on the Potomac in June: throwing a vibrating jig around grass edges, skipping docks and daubing a jig around wood. Hibdon is fishing in the middle of the nine flights and finishes at the same time today as on Thursday, his conditions won’t change dramatically.

In Pursuit of the Lead

Right behind Hibdon as of the noon hour with 14-4 on the day (and 30-15 unofficially), New Jersey pro Adrian Avena is almost certainly playing the tide. Avena, a veteran of the Potomac and of tidal fisheries in general, appears to be working his way through a milk run of spots as he looks to upgrade from the plethora of 2-pounders he’s caught so far today.

Avena’s schedule today, however, is dramatically different than on Thursday: he was the fourth boat out this morning and will end his day at 3 p.m. instead of the 5 p.m. finish he had on Day 1.

Terry Bolton admitted after the first day that he “caught everything he could” just in case his patterns fizzled on Day 2, but so far the Kentucky veteran seems to be in good shape to cash his very first Potomac River check, currently sitting in fourth with 13-12. Joey Cifuentes is also mirroring his first-day timing on a moving bait, and currently holds down fifth with 12-8.

Previous Potomac winner Tom Monsoor is working his way through a much slower day so far, with 9-0 as of the noon hour after a 16-pound day on Thursday.  Multiple anglers who finished the first day in the Top 20 have been hard to find today, so there are undoubtedly other 15- to 18-pound bags out there. We’ll find out when weigh-in starts at 3 p.m. EST!