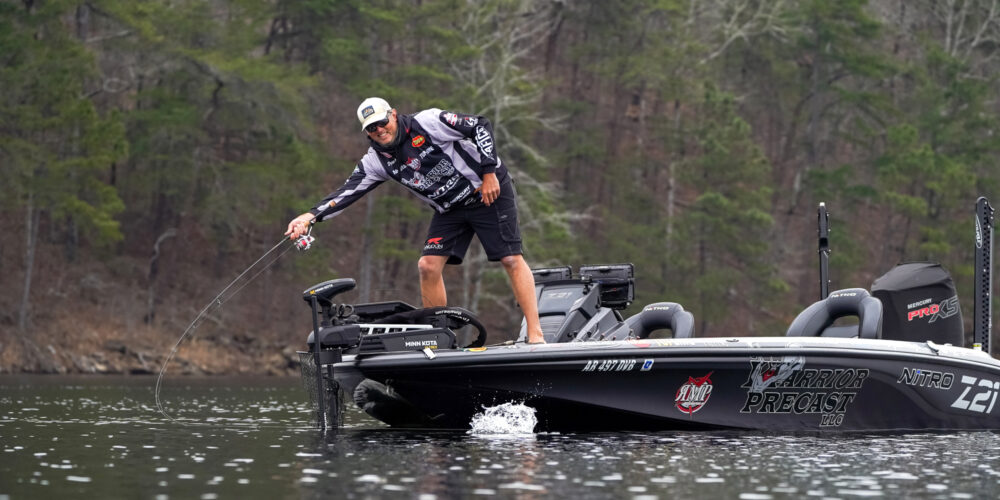 Dylan Hays has been one of a handful of anglers who found a good bite early on in Day 2. Photo by Rob Matsuura. Angler: Dylan Hays.
March 12, 2021 • Joel Shangle • Tackle Warehouse Pro Circuit

CULLMAN, Ala. – It’s the age-old question that anglers ask themselves year after year this time of year around Smith Lake: spotted bass or largemouth? On Day 2 of the Tackle Warehouse Pro Circuit event, the answer again seems to be “Yes, both.”

At least, according to unofficial leaders John Cox and Cold Floyd. Floyd held the lead for a good part of the day so far with just shy of 12 pounds, on a mix of spots and largemouth. Cox started out strong this morning with (surprise, surprise) a 4-pound largemouth on his first flip, and three pretty quick fish that went 10 pounds; he got stuck on that number for a couple of hours, though, until a pair of 1 ½-pound spots pushed him back into the unofficial lead with 12-12 for a total of 29-9.

Scattered spots: The big boondoggle so far today has been around the dam, which was hopping first thing on Day 1 but was dramatically slower the first couple of hours of this morning. Exactly why is a head-scratcher: same weather, anglers are still seeing herring on their sonar, but bites have been few and far between. Josh Weaver told MLF photographer Rob Newell that fish were grouped up better on Thursday with four to six spots in a pack, competing for his bait; so far on Day 2, Weaver is seeing singles or doubles on his sonar, and fish aren’t as competitive for baits as they were yesterday.

Day 1 leader Kerry Milner experienced a similar morning, arriving at his first spot and finding it almost barren of bait. Milner has been bouncing around since, adding two fish (including one spot that pushed the 4-pound range).

Dylan Hays seemed to be the exception: Hays wrangled five fish for 11 pounds pretty quickly before it became sunny and slick calm.

Uh oh …: Those of you quietly waiting for Jesse Wiggins to come out of lurking and make a run at the top 20, your wait might be over. Wiggins – who was a very popular pick this week in Choose the Champ – has five fish for 11 pounds as of the lunch hour.

Good ones here and there: We’re hearing scattered reports of one good fish here, one good fish there: Brad Knight has two largemouth in the livewell, but they’re good ones (a 4 ½ and a 5). Brett Hite’s three fish for 9 ½ includes a 5-pounder.

What’s up next?: The final three to four hours of the day are leaning toward “largemouth friendly”: it’ll be sunny, increasingly warm and calm through the afternoon.

Weigh-in at 3 p.m. CT: The live leaderboard will go dark at 2 p.m. CT, but the live stream of the Day 2 weigh-in will start at 3 p.m. CT right here on MajorLeagueFishing.com