MIDDAY UPDATE: Day 1 on the Potomac Providing Plenty of Bites 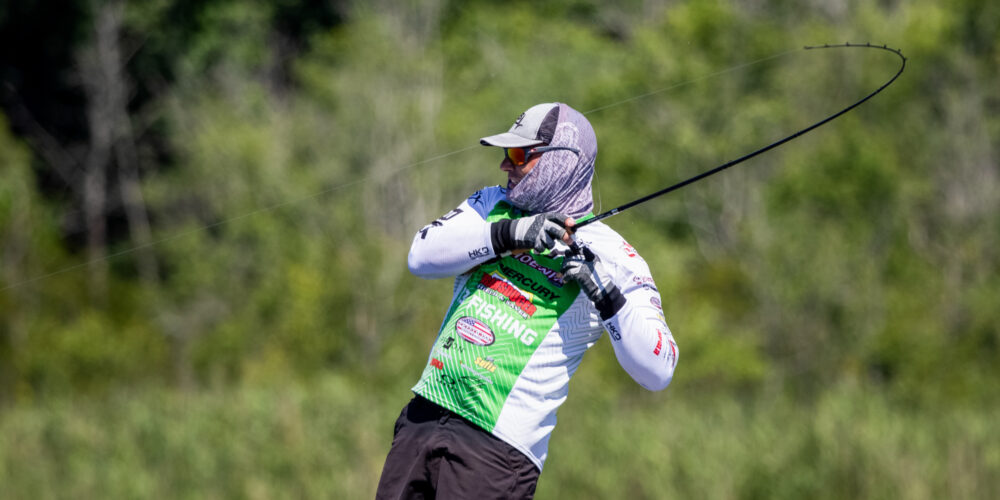 MARBURY, Md. – It was a productive morning on the Potomac River for the anglers fishing Day 1 of the Federal Ammunition Stop 5 Presented by Lucas Oil. A good percentage of the Pro Circuit field of 158 reported limits before noon, with Michigan pro Steve York sitting atop the unofficial leaderboard with 16 pounds, followed by Clabion Johns and Rusty Salewske.

Whether that 16-pound mark remains as the high bar for Day 1 remains to be seen, but MLF tournament history on the Potomac shows that York has likely put himself in a comfortable spot to chip away at small upgrades as the 158-angler field heading into the next few hours of the afternoon.

What We’re Seeing So Far

As projected in most of the pre-tournament chatter – and is always the case on the Potomac – grass and wood/docks have been big players, and there are a large number of anglers sharing the same grassy areas, trying to get out-bit by their fellow competitors. York has built his 16-pound bag with a variety of baits on mixed cover, flipping docks, winding crankbaits and swim jigs, and fishing a frog around scattered grass. The Michigan angler said that his biggest of the day came on a frog.

Johns has spent the majority of the day throwing a frog, and has gradually upgraded with a couple of 3- and 3 1/2 pounders. Most importantly, Johns has fished clean all day long: not a single lost fish using a technique that’s notoriously difficult to bat .1000.

Jacopo Gallelli spent his morning methodically winding a crankbait through grass, but he mentioned to MLF photographers that he’s fishing with the wind. If that wind dies down or changes, he may need to re-evaluate his strategy. Ponds has caught his fish so far throwing a variety of baits to wood and grass, but reported that his bite has lessened as the morning wore on.

There aren’t any Angler of the Year candidates near the top of the unofficial leaderboard, but that could easily change as the outgoing tide changes things around in the second half of the day. Points leader Cole Floyd is unofficially in 64th place with a limit of 9 pounds. Skeet Reese is just behind Floyd in points but is ahead of him on the leaderboard with an 11-pound limit.

No report from Michael Neal yet (Neal sits in third place in the AOY race and is just ahead of Bobby Lane). Lane has been able to find a limit, he’s only reporting about 8 pounds, putting him in 74th place unofficially.

The wind played a big factor on the Potomac this morning, but expect it to die down this afternoon. Since the noon hour has hit, the wind has subsided as the tide begins to ebb at 12:28 p.m. We’ll see how that changes things, but you can be sure that the afternoon bite will look a lot different than the morning.