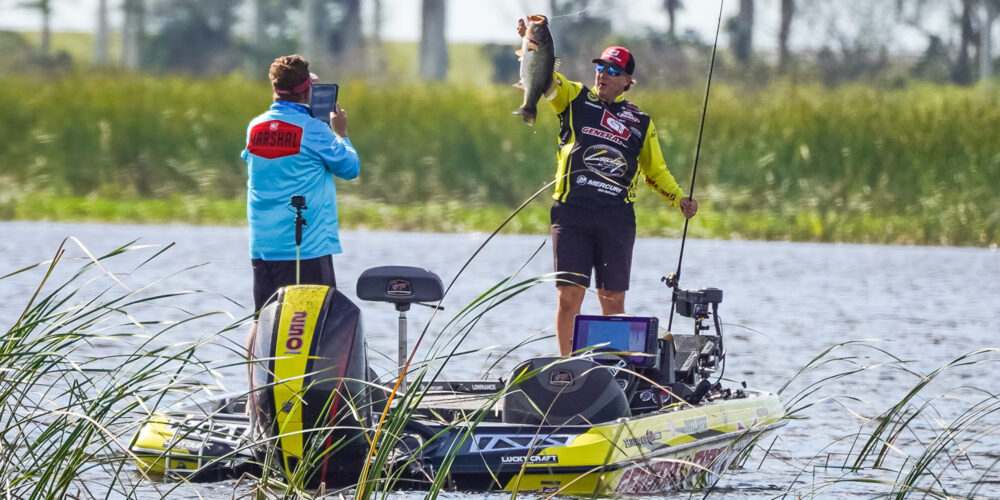 CLEWISTON, Fla. – After a full practice period and one tournament day of fishing, multi-day tournaments usually see a drop in quality on Day 2. That might be the case for most fisheries, but most fisheries aren’t Okeechobee.

While we haven’t seen too many giants today (save for one nearing 8 pounds from Skeet Reese; more on that later) or giant limits (so far), it seems like everyone is catching numbers. Of the reports we’ve gotten from on the water, almost every pro has found at least a little bit of something on Day 2 of the 13 Fishing Stop 1 of the Tackle Warehouse Pro Circuit Presented by Bad Boy Mowers season opener.

Near the top of the leaderboard, Bill McDonald, has a limit of 21 pounds for an unofficial total of 38-04 for the tournament. He has a quality bag, for sure, and the best part is that he still has some small ones to upgrade alongside a 5-pounder. McDonald had a solid Day 1, but now he’s in real position to not just make the Day 3 cut (a virtual certainty) but to also set himself up for a Top-10 showing.

Right behind McDonald, Bass Pro Tour pro Anthony Gagliardi has about 12 pounds today to go with his 24 pounds even from Day 1. Of all the pros we have reports from today, Gagliardi is in the best shape to potentially overtake Jim Neece Jr.’s opening-round lead, though you might want to watch out for Skeet Reese.

If you’ve been following on social media today, you’ve probably already seen Reese’s Okeechobee tank. It looks like it’ll go close to 8 pounds, which is more than enough to bolster his close to 21-pound bag. After weighing in 17-12 yesterday, you can bet on seeing Reese’s name on the leaderboard tomorrow, too. He recently landed a 5-pounder to take the unofficial lead from McDonald.

Jimmy Reese is looking to join his brother on moving day, though he still has some work to do. Still, Jimmy has nearly matched his Day 1 weight already and has plenty of time to do some upgrading. He’s currently in 41st place, comfortably within our projected top-50 cut line.

As was the case yesterday, slowing down seems to be the predominant approach. Most pros are pitching to spawning fish, and while actual sight-fishing hasn’t been a big player, more pros do seem to be taking looks as some beds today. Otherwise, it’s been a ton of stick baits and creature baits, some ChatterBaits, frogs and prop baits – no real surprises when it comes to tactics of choice on Big O.

On the topic of surprises: As good as Okeechobee is fishing (relative to just about every other lake in the country), some of the names we expect to see at the top of the leaderboard just haven’t been having much luck this week. Pros like Brandon and Jared McMillan (54th and 134th, respectively, at the moment), Ron Nelson, Adrian Avena and even Tim Frederick (today, anyway) haven’t been able to find much size or consistency. There’s a lotta ballgame left, but each of those pros need to find something good in a hurry.

Now’s the perfect time for that. By all accounts, fishing today is very similar to what we saw yesterday. On Day 1, a big flurry after lunch shook up the leaderboard and saw pros like Neece and Burghoff make hay in the afternoon hours. If that happens again today, all bets are off.

With a couple hours before weigh-in starts (and plenty of flights checking in later than that), expect to see a lot of movement on the unofficial live leaderboard, which will be updated until 2 p.m. ET, and be sure to tune in for the live weigh-in show at 3 p.m. ET on MajorLeagueFishing.com.