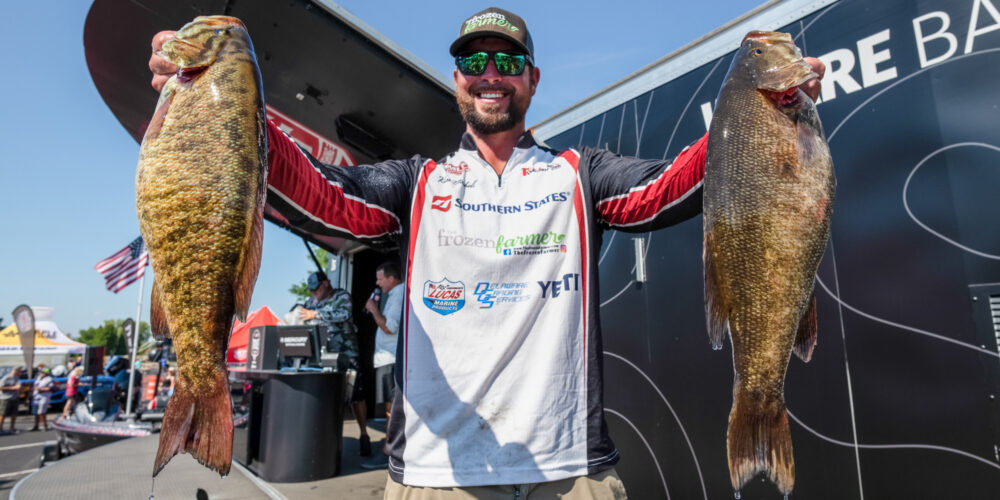 MASSENA, N.Y. – What does 20 pounds of bass get you on the St. Lawrence River? Apparently, an early ride home.

What transpired during the Knockout Round of the Tackle Warehouse TITLE Presented by Mercury was pretty remarkable. Of the 18 pros fishing for the eight spots available for Sunday’s Championship Round, 13 of them eclipsed the 20-pound mark, and it took 21 pounds even for Josh Bragg to claim the final spot over Jon Canada.

That meant it was a tense weigh-in for the majority of the anglers. Well, all but Kurt Mitchell, who had “ones of those days” to the tune of 24 pounds, 8 ounces – the largest bag of the event – to cruise to victory in the Knockout Round.

“I’ve felt good since about noon today,” Mitchell said. “I had more than 21 pounds, and I knew we’re in the championship. You don’t get days like today very often. The only thing is tomorrow would’ve been the right way to do it.”

Based on what he did today, there’s no reason that Mitchell can’t back it up on the final day, considering how badly his day started and how much he adjusted.

Launching this morning, he figured he had three or four areas he could catch some good fish, but when he arrived at his starting spots after a 55-mile run, all he found were little fish. So, he ran to a buoy marker on a shoal he’d caught three good ones the first day of the Qualifying Round for Group A, and it was vacant.

It was definitely a frustrating moment, but it was one that ultimately turned around his day.

“It ticked me off (when there were no fish by that buoy),” Mitchell said. “So, I decided I was going to figure out where they went. I started searching that shoal the buoy was on, and sure enough, there were three little depressions in that shoal maybe 200 yards away, the area inside the area, and that’s where I caught them.”

From that moment on, Mitchell’s day was all blue skies and green lights, as he said he was tossing back near 4-pounders left and right where two days ago he could barely catch a 3-pounder.

In fact, his fortune was so good today he basically stopped fishing and went searching for new stuff all afternoon, and he lucked into a 5 ½-pounder to truly seal his win.

Now, it’s whether or not he can do it again tomorrow.

“This is my second time I’ve (made it to the Championship Round of the TITLE),” Mitchell said. “Both times have been pretty cool. The last time at Sturgeon Bay, it was a shock I was even there the last day. This time, I really want to win.

Wall Shifts Gears to Have Fun

All week long, multiple anglers have been making runs of 70, 80 and 90-plus miles to catch their fish. And then there’s been Jacob Wall, hanging around Massena and quietly bringing in just enough weight to make the Knockout Round from Group B.

Today, the Oregon pro decided to shift gears a bit, and it paid off in a big way.

“I had a pretty good feeling about today,” Wall said. “Yesterday, at the end of the day, I had four bites in a really short period of time drifting this one little stretch. I didn’t catch anything bigger than 3 ½ pounds, but I lost a couple that felt like good ones.

“I’ve been starting up here near Massena, but I’ve been going to Ogdensburg (New York) every day. Today, I went straight down there to start because the wind and weather were perfect. My second fish of the day was a 4 ¾-pounder, and that set the tone.”

If that first big one set the tone, the 5-pounder he caught to fill his limit really put him at ease. Though, he said he was never really nervous, just “having fun.”

He sees no reason to stop fishing that way come the Championship Round.

“I have to think about it as far as a game plan of what I’m going to do, but I think it’s going to be pretty similar to today,” Wall said. “I don’t want to abandon what’s got me here. I don’t think I can really falter. As far as the day goes, I’m just going to go out and try not to think about what it’s for. I just want to have a good time and go fishing. I’m going to enjoy the day whether I catch them or not.”

Ebare “Blessed” On and Off the Water

Dakota Ebare wanted to put himself in contention for a trophy today. Turns out, he already had.

During weigh-in, he was presented the 2022 Forrest L. Wood Sportsmanship and Community Leadership Award after being nominated by his peers. And considering he’d just weighed in 21 pounds, 10 ounces to give him a chance at the TITLE trophy, he felt blessed.

“This is icing on the cake to a good day,” Ebare said, holding his award. “I had a really blessed day on the water. It wasn’t really easy. I just kept moving around, slowly upgrading and slowly upgrading until I hit one little area that really had them and caught four good ones in a row and then I quit around 11:30 a.m.”

While he hails from Louisiana, Ebare has spent a lot of time fishing on the St. Lawrence over the last few years, and he’s certainly one to watch on Sunday. Then again, with the weights zeroed, he knows as well as anyone that it’s anyone’s opportunity to win.

“Tomorrow is going to be a shootout,” Ebare said. “It’s going to take a 24- or 25-pound bag to win. I know that is in my area. They’re not biting really well for me, but they’re there.

“I’ve worked really hard learning to fish this way, fish up north, fish for smallmouth. So, it’s awesome to see all that labor pay off, but still have work ahead of us.”

Along with Mitchell, Wall and Ebare are the Qualifying Round winners, Spencer Shuffield and Polaris Rookie of the Year Nick Hatfield. And rounding out the rest are Martin Villa, Matt Becker, 2022 REDCREST winner Bobby Lane, Kyle Cortiana and Josh Bragg.