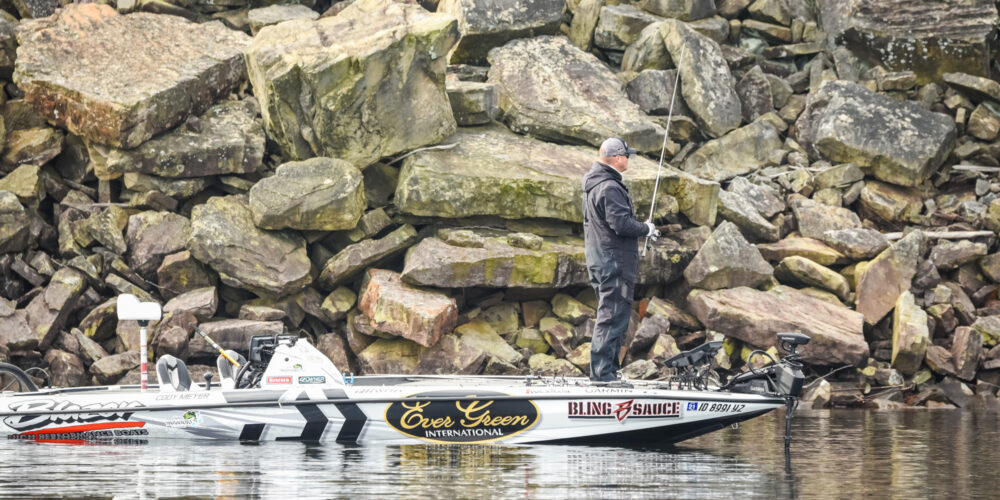 CULLMAN, Ala. – Kerry Milner leads the field going into day two of the Tackle Warehouse Pro Circuit on Smith Lake with a day-one catch of 18 pounds of spotted bass. Joseph Webster (17-11) and Joshua Weaver (17-4) are on his heels by less than a pound, and they’re also catching spotted bass. Behind them is a trio of anglers who leaned heavily on largemouth on day one: John Cox (16-13), Cole Floyd (16-2) and Bobby Lane (15-15).

This dynamic begs a couple of interesting questions for day two.

Milner did all of his work on day one without a forward-facing sonar. He used traditional 2D sonar to occasionally see herring ballooning up into the water column under his boat. He says the technique he’s using does not require forward facing sonar to “see” fish out in front of the boat.

However, Webster and Weaver are both using forward-facing sonar and are also catching spotted bass chasing herring. How will this sonar race shake out today?

The largemouth contingent of Cox, Floyd and Lane seemed to make sacking up bigmouths look easy on day one. But all of them were concerned about a limited number of bites and areas to carry out their largemouth fishing. The question here becomes will more largemouth move up with the warming weather to replenish the shallows and keep the largemouth train rolling.

Four days worth of largemouth is a tall order to keep the wheels rolling on that train on Smith Lake.

Lane revealed that several of the fish he caught on Day 1 were already spawning. He saw the beds; he saw them paired up, the whole nine yards. He lost a 7-pound female after catching her boyfriend.

With the warming trend continuing and a new moon on Saturday, could there be a sight fisher or two in the mix on Sunday? If Cox has his way, it will happen.

“I’m fishing muddy water now,” Cox says. “But if I make it until the weekend, I’ll do nothing but look for spawners in clear water. They’re not quite there yet, but in few more days and with less boats on the water, it could line up right.”

Keep an eye on Cody Meyer over the next couple of days. Going the distance for four days on Smith Lake requires consistency and Meyer’s reputation for consistency is golden. What’s more, two of his western counterparts – Michael Bennett and Brent Ehrler – have both won on Smith previously with their spotted bass savvy.

It just seems Meyer is due for a win on this lake, so could this be his week?