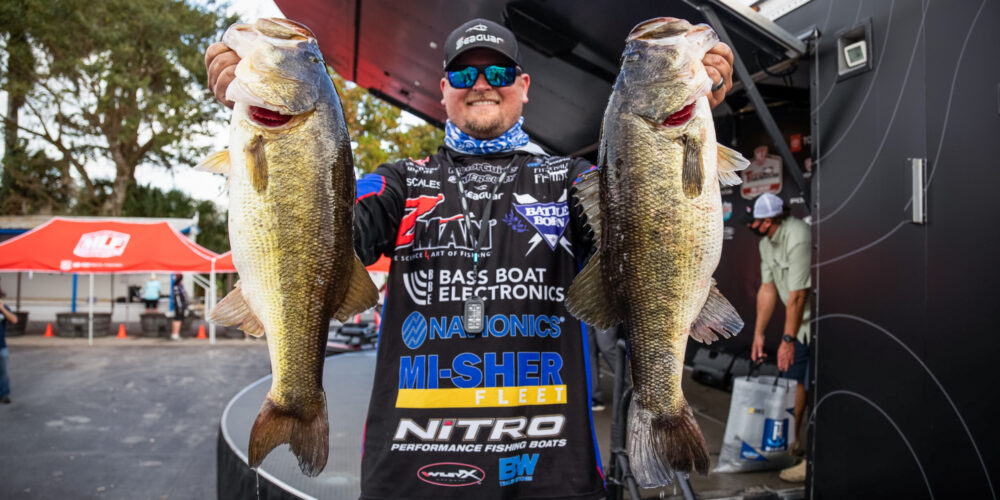 CLEWISTON, Fla. – As he prepared for takeoff of Day 2 of the Tackle Warehouse Pro Circuit Presented by Bad Boy Mowers season opener on Lake Okeechobee, tournament leader Jim Neece Jr. was matter-of-fact about his chances of repeating the 27-pound performance that gave him the lead after the first day at 13 Fishing Stop 1.

“In the back of my mind, I think I can go up there and catch some fish – now can I catch 27 pounds again? I honestly don’t know,” said Neece, who fished a spot on the north end of Okeechobee that he stumbled across on the final day of practice. “I didn’t have a bite for an hour. I was getting ready to leave and got bit – it got me to stick with it, and it just broke loose.”

Neece’s Day 1 honey hole started to produce bigger bites after lunchtime as the Tennessee pro replaced the 12-pound limit he had in his live well with a pair of 7-pounders and three more upgrades.

“(In practice) I pulled into this little ol’ place and caught a big one and shook another off,” Neece said of his Day 1 spot. “It was the only place I’d been bit good, so I didn’t really have a choice but to take a chance on that. I may go up there and not catch a bass today, that’s how iffy it is for me. It’s not like I’m on the mega-hole, but I don’t know enough about bedding fish to answer that question. It’s one of those things where if it happens, it happens.”

And if it doesn’t happen, Miles Burghoff will be right on Neece’s tail: the Tennessee pro experienced nearly identical timing on the first day, with a big post-lunchtime flurry that saw him upgrade from 12 pounds to 26-2.

Burghoff’s area isn’t shy of other anglers – he’s fishing around roughly 15 other competitors – but he believes that it has the quantity of fish that could lead to another 20-plus-pound bag if he fishes it efficiently.

“I just don’t know if I can catch the size (again),” Burghoff said. “I know I’m probably going to get 30 or 40 more bites. It’s just about rotating through the different areas. It’s a big area, but it seems like there are little satellite spots that turn on at any moment, and you can catch a couple of big ones.

“I knew that the spot was good for over 20 pounds, but didn’t know it could produce 26. I think there are plenty of fish there and that it definitely has the potential to carry me through to Sunday, but there are some a lot of good guys fishing there who didn’t get those key bites. I feel like I’m the most efficient, I’m bouncing around to places within this area.”