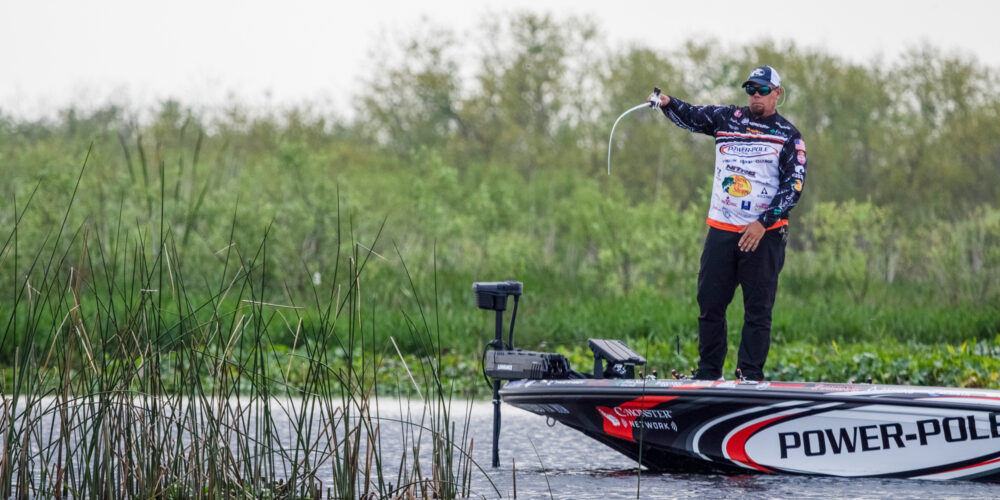 CLEWISTON, Fla. – Who doesn’t love a good, old-fashioned battle royal on one of the most famed bass fisheries in the world?

As they leave the dock this morning at 13 Fishing Stop 1 – the first tournament of the 2021 Tackle Warehouse Pro Circuit presented by Bad Boy Mowers – that’s exactly what Jim Neece Jr., Miles Burghoff, Skeet Reese, Bill McDonald and Chris Lane are in for on Lake Okeechobee. Those five anglers enter Championship Sunday within 1 pound, 7 ounces off one another: Neece leading the posse with 56 pounds, 11 ounces; Lane in fifth with 55-4, and the other three sandwiched in between in the race for the first six-digit winner’s checks of the season.

It’s one of the most tightly packed Championship Sunday fields in recent history on Okeechobee – the previous five Pro Circuit/FLW Tour events held here (dating back to 2012) saw an average of 15 pounds separating the first- and fifth-place anglers heading into the final day.

“It’s a little unusual that we’re all so close like that, but almost every one of these guys – including myself – could be 10 pounds ahead if we were able to capitalize on a few more big bites,” said Lane, who admitted that he lost a pair of fish Saturday that he estimated at 7 pounds apiece. “The grass is really thick and it’s just really tough to capitalize on every one of those bites.”

“The fishing is really good right now, though – it’s been cold down here in Florida recently, but the weather has been beautiful and warm (this week), so you have a lot of fish pushing up. I can see it being a battle on Sunday. Capitalizing on those big bites is the key.”

Seven of the final 10 (and 14 of the top 20) saw their weights drop from Friday to Saturday, the two notable exceptions being Neece and Ryan Salzman. Neece improved on his Day 2 total by 7 pounds with 18-2, while Salzman weighed in the biggest bag of the day (22-5) to leapfrog from 49th to 10th. But Okeechobee was noticeably stingier for almost everybody else in the 50 cut, possibly due to a pesky sustained south wind that might’ve forced some unwanted adjustments.

“It was piping out there,” Lane said of the wind. “This lake is one that’s really affected when the wind blows, water can get dirty in a hurry. It’s not supposed to be as windy (Sunday), but it’s still going to be important to find the right water. It’s warm enough that more (females) will move up if they can find clear water.”

What Does History Say?

If you’re looking for some tournament history to help identify any advantage on Sunday, you’ll have to dig pretty deep.

Okeechobee being perhaps the most frequently identified “sometimes I hit it, sometimes I miss it” fisheries in the country, it’s maybe no surprise that the top 5 is pretty shy on success here, with the exception of Lane (he claimed BASS Open wins on Okeechobee in 2006 and 2010 and has four tour-level top 10s here) and Burghoff (who picked up a Phoenix Bass Fishing League trophy on the Big O in 2010 and has a handful of BFL and College top 10s here).

“I’ve fished four tournaments here in my life, never really done that well, but I guess that’s how it is for a lot of people,” Neece said. “It’s working out pretty good so far this week. I’m hearing that it won’t be as windy, which I’m happy to hear. I’m running a long ways, and I don’t plan to change that (Sunday).”