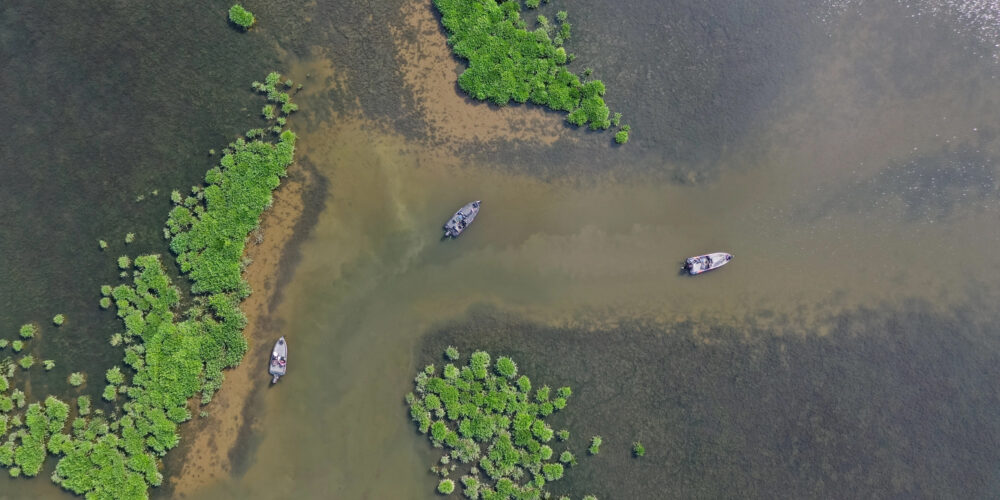 Being in the right place on the right tide is a key on the James River. Photo by Rob Matsuura.
June 18, 2022 • Tyler Brinks • Tackle Warehouse Pro Circuit

RICHMOND, Va. – Tidal bass fisheries are considered some of the trickiest to figure out. Tide swings put an emphasis on perfect timing and being in the right places during the right windows. When things are right, anglers seem to do no wrong. When the tide is dead, however, the best areas on the James River can seem void of life.

The proverb that time and tide wait for no man fits the fishing on the James this week at Toyota Stop 5 Presented by PowerStop Brakes as several anglers have seen significant reversals of fortune after two days of fishing.

After Day 1, second-place pro Dakota Ebare said: “On tidal fisheries, you can have 10 pounds as easily as you can have 20 because it’s all about timing.”

Ebare was prophetic as his 20 pounds, 15 ounces on Day 1 turned to 12-8 on Day 2. And Ebare wasn’t alone in experiencing drastic swings in weights.

Florida’s Cole Hewett had the inverse day to Ebare and turned 12-6 into 20-5 to vault into the Top 10. Chris Groh’s weight dropped from 20-7 to 8-6, dropping him from third to 26th. Subtle changes between the two anglers were the culprit for their divergent outcomes.

With plenty of tidal experience on his home waters of Florida’s St. Johns River, Hewett knows how to run changing tides, but a change to his rotation of spots on the second day was vital for his big rebound.

“The first day, I started close to the ramp and wasted 45 minutes fishing around here,” he said. “When I moved to the Chickahominy, I knew I messed up because I caught fish right away. The second morning, I went straight there, saved time, and got to my best areas. I caught more fish early and it got me off to a good start. Other than that, it was the exact same stretch doing the same exact thing.”

The Pro Circuit rookie has already secured his best finish on tour by qualifying for his first Day 3. Hewitt is having success with a SPRO frog and buzzbait in the Chickahominy and closer to the ramp later in the day with a big squarebill and ChatterBait.

Groh Experiences Impact of Winds on the Tide

Illinois pro Groh stumbled some but will have another crack at the James today. He understands tides and how they work but said winds have just as big of an impact as the tide chart.

“You can run every tide chart out there and know all of the times, but you also have to know what different winds do to different tides,” Groh said. “That’s what makes good tidal anglers like Cody Pike so good here on the James. They know how winds trap and keep tides from moving. I’m learning more about how it affects them here every day.”

On Day 2, Groh went to his Plan B area to compensate for the later tide but just missed the right timing.

“I went to my primary area and waited an hour for the tide to get right, but it wasn’t coming back in fast enough, and I ran out of time,” he shared. “If the winds blow in a certain direction and fast enough, it’s not going to come in on time and it might be 30 minutes off.”