MORNING RESET: It’s Cut Day for Group A at the TITLE 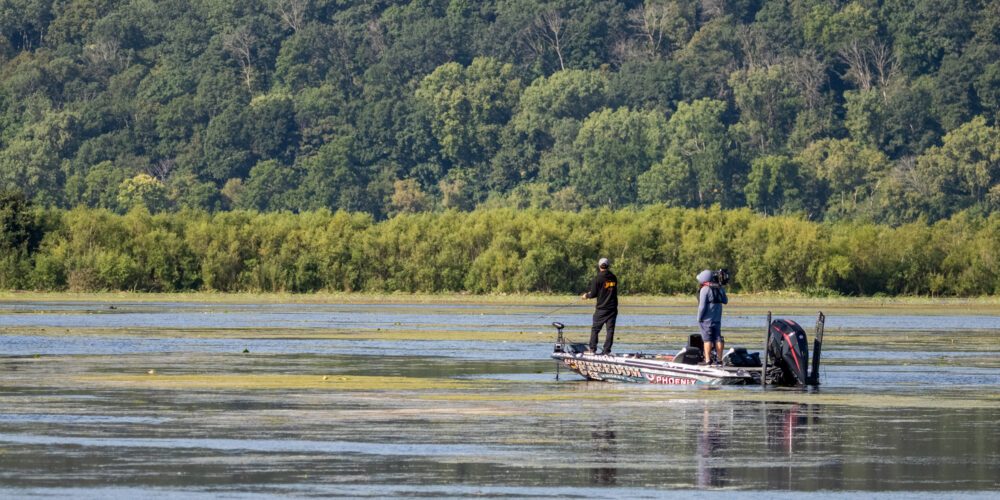 LA CROSSE, Wis. – Today is when things get interesting for Group A in their second day of competition at the Tackle Warehouse TITLE Presented by Mercury.

The pro with the heaviest two-day total weight at the end of competition will automatically advance to Sunday’s Championship Round and second through 10th place will punch their ticket to Saturday’s Knockout Round. As for the rest, well, they will take a $10,000 check and head home.

Mike McClelland sits in the driver’s seat with 13 pounds, 12 ounces, though he’s not comfortable with a mere 2-ounce lead over Alex Davis and only 9 ounces separating him from fourth-place Ryan Salzman.  So, it’s very much anybody’s ball game today.

Things are also interesting around the cut line to advance to the knockout round with a three-way-tie for ninth between Joshua Weaver, Kurt Mitchell and Jimmy Washam, who all have 11-9. Behind them, Spencer Shuffield, Jacopo Gallelli, Michael Neal all sit within 1-9 of making the cut, so there should be no shortage of drama on MLF NOW! today.

Group A spent yesterday on the bank, while Group B smashed them on them on the Mississippi River. Adrian Avena dropped 15-12 on the scale and six other pros broke the 13-pound mark. After dropping nearly a foot overnight between Saturday and Sunday of official practice, the river has been holding relatively steady – and is projected to stay that way.

Could that be why the weights went up?

“I don’t know if the bite is getting better, but I think it depends on the current flow,” Burghoff said. “That’s probably the big difference-maker between [Group A and Group B weights]. It could have just been they were on better-than-average fish, or maybe a different pool played because of their fog delay. But them catching them better doesn’t really tell me anything. I have to pay attention to the current conditions every day.”

On the other hand, third-place pro Cole Floyd thinks some stability is exactly what these fish needed.

“If things stay stable it’s definitely going to help and it’s like that on any body of water,” Floyd said. “Like on Kentucky Lake when it jumps around all over the place it takes a little bit of time for the fish to adjust and get settled.”

Sand and Grass are Key Patterns

At this point we’ve seen good bags of fish from all three pools, with mixed bags of smallmouth and largemouth being a big deal. Sand drops, current and matted grass have all accounted for good weights so far. When it comes to today and the rest of the week, things shouldn’t change much.

“All I’m doing is flipping a 1-ounce weight in matted grass,” Floyd said. “I have a few areas I can do it, but if I get a good bag I’m going to try and expand on it a little. There’s bunch of clumps of coontail and duckweed right in the area I’m fishing and I think you just have to get lucky and hit a little cavern in the mat where one is sitting there.

“It’s a grind, though. But I’m going to hammer down and try to win the round because I have a shot.”

While Floyd is banking on quality over quantity of bites, Burghoff is running more of the sand program and banking on smallmouth, which gives him a different approach to the rest of the week where consistency could be the ticket to the Championship Round.

“I thought I needed 12 pounds a day and I caught 11-11 and am sitting in eighth, which is exactly where I wanted to be,” Burghoff said. “I want to avoid big fish as much as possible, while still making the next round. It sounds funny, but in this format you need to avoid them.

“I’m down on [Pool] 9 and I’ve got two groups of fish that were incredibly fired up the first day. I left them biting and I think they should stay stable. The question is are there enough 2 ½-pounders I need to make the 12-pound benchmark to make the Knockout Round? I’m trying not to overthink it, I’m just trying to go out and follow the conditions.”