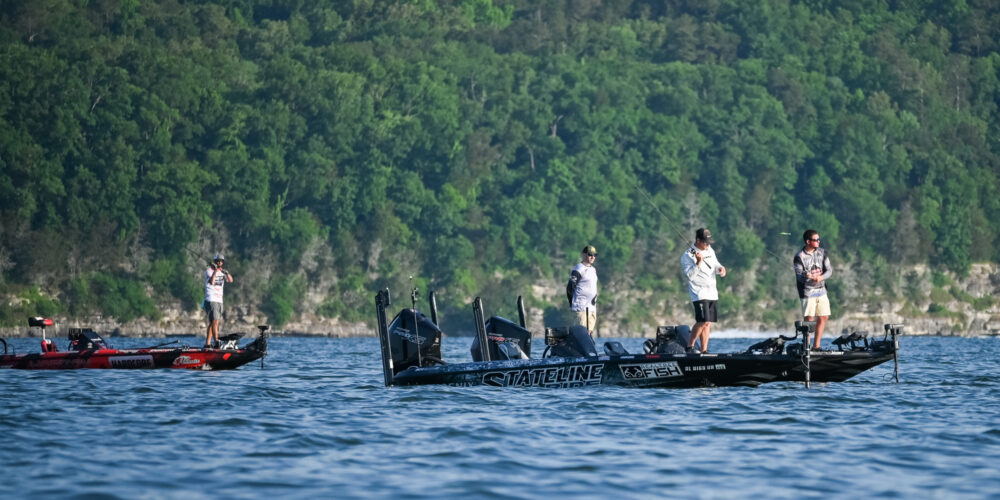 The offshore bite wasn't the sole focus of practice for many, but it produced in a big way on Day 1.
May 13, 2022 • Joe Sills • Tackle Warehouse Pro Circuit

GUNTERSVILLE, Ala. – By any measure, the South has had a mild spring. Last week, temperatures comfortably in the 60s and 70s meant a temporary reprieve from the blistering approach of summer. This week, heat and humidity have arrived, quickly sending highs into the 80s and the bass of Lake Guntersville towards summertime stomping grounds offshore.

For some anglers at the B&W Trailer Hitches Stop 4 Presented by A.R.E., that means game plans formulated in practice are headed out the window. Meanwhile, others are gambling on sticking to their guns.

Count Jacob Wall among the adapters. Wall tallied up a five-fish limit of 20 pounds, 7 ounces on the first day, good enough for eighth overall. But Wall says much of that work was done on the fly after a slow start over shallow fish that he intended to target during the shad spawn.

“I caught a couple of fish shallow this morning and immediately went deep the rest of the day,” Wall said. “I fished spots I found from living here the last couple of years, places I didn’t really practice. I made decisions based on gut feelings all day. If I felt like I needed to go, I would go, and if I needed to stay, I would stay. I ran around and checked off a lot of spots offshore.”

Wall said while fish are transitioning to deeper areas with cooler water, a lack of current is keeping the fish spread out. Large schools like the ones found by leader Spencer Shuffield seem to be a rarity. Instead, competitors having the most success are running and gunning, finding keepers piecemeal throughout offshore areas.

“They are very scattered,” Wall confirmed. “It’s difficult to find a group of fish. You see a couple of dots here and a couple of dots there. You might see a few on side-scan, but there are only a few.”

With offshore fish scattered around the lake, other competitors are opting to play with patterns that have produced for them elsewhere. South Carolina pro Brian Latimer says that for him, the tournament is about more than winning, and he’s taking the opportunity to hone his craft.

“Of course, I want to make the cut, but the bigger picture is that I’m not a 20-year veteran, so I’m still building all my skills,” Latimer said. “I’m still learning things, learning the bodies of water and my own little psychological nuances. Every time I catch a fish doing something I like to do or that I have worked on it makes me stronger mentally. That’s how you turn into a Skeet Reese or a Jacob Wheeler, is when you start to build on your skillset and you build confidence in things.”

Latimer weighed in 15-2 on Day 1, placing him just inside the Top 75. Latimer says he’s comfortable with the total, which represents the best of about 20 fish overall, and plans to continue the strategy on Day 2.

“I’ve been watching a lot of racing here recently,” Latimer said. “It’s just my way of having something that’s not fishing. At Talladega, one of the drivers was sitting in sixth place on the last lap and he just hung tight. He ended up winning because everybody wrecked each other.”

One Big Bite Can Make the Difference

On Guntersville, a lake with a more than 14-pound lake record and a history of producing kickers in tournaments, a single bite can make or break a day. The Day 1 weigh-in consisted of a steady parade of bass over 6 pounds, though David Walker’s 7-8 currently leads for big bass.

Walker says the fish boosted his confidence and helped refresh his mentality for the duration of the day.

“That’s always a good way to get things started,” Walker said. “It wasn’t my first fish, but it was early enough it really calmed me down and encouraged me to stick with what I was doing.”