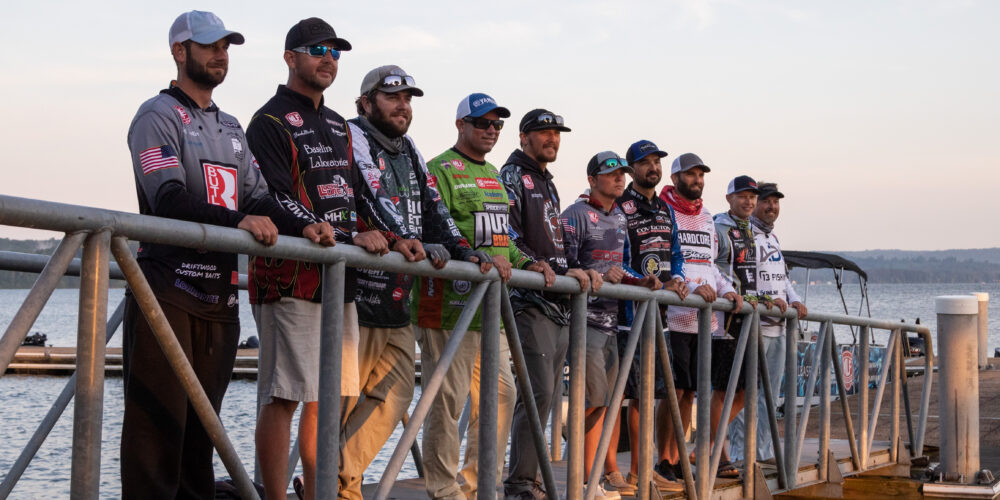 GUNTERSVILLE, Ala. – The field is down to 10 as Championship Sunday begins for the Tackle Warehouse Pro Circuit Presented by Fuel Me event at Lake Guntersville. All week, it’s taken more than 20 pounds to place in the top five, and today is likely to prove no exception. The Big G is living up to its recently rejuvenated reputation as a hotspot for big bags, and today’s winner will no doubt need to rise above a field full of heavy hitters to raise the trophy.

But don’t forget: The weights are zeroed at the start of Championship Sunday, so anyone in the Top 10 has a shot at winning it.

Here’s where things stand going into the final day of competition:

For much of the tournament, the top was a tale of two tactics. Spencer Shuffield has lead wire-to-wire by harvesting fish from a handful of offshore honey holes all week. Red hot contender Michael Neal is trying to chase Shuffield down by relying on a mix-and-match pattern of reloading structure around the lake.

Neal hasn’t been far behind Shuffield in the weight department, but he’s doing a heavy amount of running and gunning – picking up one fish here and there – to hang tough.

Meanwhile, a charge from the shallows could upend the entire balance as Bobby Lane and Ron Nelson attempt to wrest control of this Pro Circuit championship away from those fishing the depths. Of today’s ten final contenders, eight are expected to spend the majority of their efforts fishing offshore. Make no mistake: every angler in this field is capable of taking home the trophy. Every angler in this field is capable of boating a bag weighing in excess of 25 pounds. And that’s exactly what it’s likely to take.

“I think it will take 25 pounds to win,” echoed fellow competitor Lane Olson.

Compelling stories abound in this Top 10. A pair of Oregonians – Olson and Jacob Wall – are fishing for this Pro Circuit title in the southern cradle of bass fishing. Rookie Nick Hatfield is vying for the win on the waters that defined some of his earliest fishing memories with his father and one of the biggest wins of his college career just days before his wedding. Lane and Neal are battling it out as two of the hottest names in bass fishing.

Overseeing the entire affair is Lake Guntersville, a character unto itself. Though the legendary lake’s reputation has suffered in recent years, anglers this week swear that it is, once again, one of the best in the nation.

“This lake is going to have those mega schools in it that it used to have five or six years ago,” added Lane. “The fish we are catching in the 3.5- to 4-pound range are studs. They are fat. They are healthy. They are mean. And the lake has more grass in it than I have ever seen.”

Though heavily composed of eelgrass, the vegetation on Guntersville is providing habitat for fry and cover for growing bass. Interspersed in the water’s depths are plenty of fish in the 5-pound range that are begging for the right angler to drop the right bait their way. To take home a Pro Circuit title this week, someone will need five of them. Everyone fishing today is capable. The question of who will weigh what will be answered this afternoon.