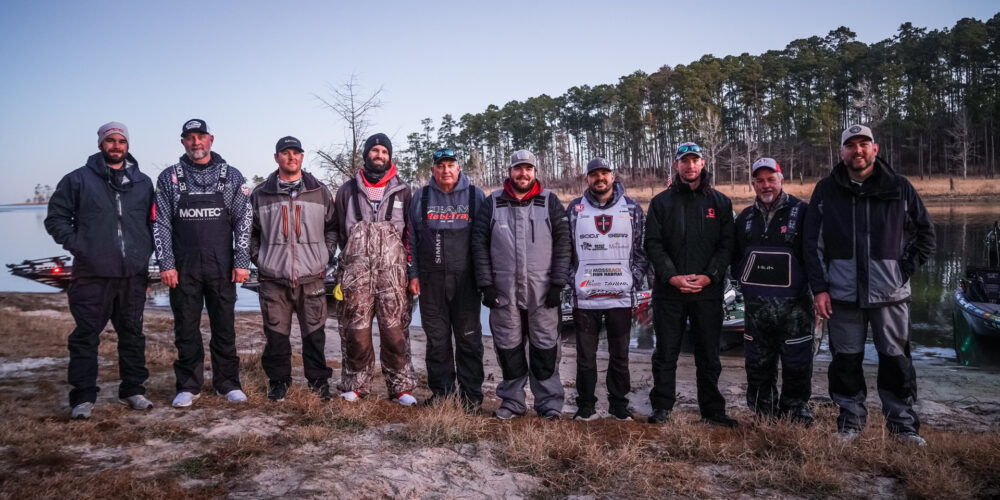 It’s no secret that Sam Rayburn hasn’t shown its true colors this week for the Tackle Warehouse Pro Circuit Presented by Fuel Me season opener. The 20-pound bags that can seem commonplace on Rayburn have been scarce, and finesse techniques have done much of the work, but that doesn’t mean there aren’t still fireworks to be seen in the final round of Guaranteed Rate Stop 1 Presented by Ark Fishing.

The Top 10 pros set out today with zeroed weights and eight hours of fishing to catch the biggest limit of the day in order to bring home the $100,000 (or more) payday. With today being the warmest day of the event so far (both overnight low and daytime high), there are plenty of pros that think the fishing is getting ready to bust loose.

Combine the fact that weights have been tight all week across the leaderboard and Rayburn’s mega potential, there’s no mistaking that the final day on Rayburn will be one worth watching.

Despino Believes Best is Yet to Come

Catching 12 pounds, 1 ounce on Thursday, Louisiana pro Randy Despino knew his pattern had better potential. Saturday, he went out and caught 20 pounds, the biggest bag of the tournament so far, and proved that he was on the right pattern. From what he’s seen after two days, Despino is sold on the fact the final round could show some of the best fishing yet.

“I just think the first day they bit real slow, real sluggish,” Despino said. “They were all small fish and I caught one female right at the end of the day. (Saturday morning), I didn’t get a bite until 9:30 and they were all big females. I just kept running my pattern all day and I’d catch one about every hour.”

“(The females) were there (Thursday), but they wouldn’t even move on my bait, (Saturday), they were choking the bait, so I think they’re ready. I think Sunday is going to be a good day.”

Running drains on the lower end of the lake, Despino hasn’t laid off his fish to save anything for today. He knows the potential the pattern he’s running has and believes the warming weather is only helping. To say he’s excited that it’s anyone’s ballgame today, with a chance at the biggest win of his career would be an understatement.

“I poured it on ‘em (Saturday) because I wanted to make the cut,” Despino said. “But I think my stuff is reloading. What I’m fishing is on the main lake. They’ve got to come in. It’s textbook and they’re coming.”

Optimistic Barnes Is on the Upswing

Tacking 16-12 on his 15-11 total from Day 1 put Evan Barnes among the five risers in the group, with his weight on the upswing. To do it, he’s fished areas with less pressure and simply put quality fish in the boat.

“It’s awesome, absolutely awesome,” Barnes said. “I didn’t have a great, great practice, but most of the ones I was catching were good chunks, 3-pounders. I thought if I could just get five of those bites a day, this is what might happen.”

Barnes says he’s fishing shallow, but not trying to play the grass game.

“I’m gonna fish shallow all day, it’s really kinda random honestly,” he detailed “I’ve got a couple different spots that are ditch curves, in the back of creeks, points with rock or wood, basically just staging areas. Anywhere I feel like a bass might pull up is what it ends up being for the most part.”

As for his chances on the final day, Barnes is feeling pretty good, hoping the best is yet to come.

“I feel really, really good about it,” he said. “I haven’t hit hardly any of my stuff, I might have not even hit 25 percent of what I feel like I can catch fish off of. And, what I thought was my best stretch, I’ve not even fished it in the tournament yet. And, today I had a 6-pounder, so I feel like maybe some big ones are starting to pull up. I think it could be really, really good. I think I can catch another 15 [pounds] or so, and that’s without a big bite. If I happen to get a good bite again, I could really drop the hammer.”

Off to a Good Start, Becker Plans a Combo Approach

Matt Becker wrapped up the 2021 Pro Circuit season with a pair of bombs, turning in triple-digit finishes at the Potomac River and the St. Lawrence. While any finish outside the Top 50 is uncharacteristic for Becker, finishing poorly in his northern stomping grounds knocked him out of the TITLE and out of contention for a Bass Pro Tour berth.

So, it looks like he’s after a little revenge this season.

“I’ve thought about it for the last five or six months now since I fell off at the end of the year,” Becker admitted.  “I caught ‘em in the Toyota Series I guess, but the Pro Circuit just left a bad taste in my mouth and I’ve been itching to get back in it. It feels good to get the season started off right, hopefully I can keep this rolling the whole year.”

Putting up solid weights without a kicker both days, Becker is doing a few things for his fish.

“I’ve been basically fishing brush for my bottom end fish, and then catching a big one or two out of the grass each day,” said Becker, who plans to go for it on the final day. “I think I’m gonna fish the brush less tomorrow, I think I’m gonna start in it, they seem to bite fairly well in the first hour or two. Then, I’m gonna spend the rest of the day in the grass, just looking for three or four of those 4-pounders.”

Asked how much he thinks it will take to win, Becker doesn’t think things are about to bust wide open.

“The wild card is if you catch one of those 10- or 12-pounders, that changes everything,” he outlines. “But, I think 18 has a good shot at winning. I would feel good with 20, that sounds good, doesn’t it?”