MORNING RESET: Top 50 Will Bring the Heat on Day 3 at Guntersville 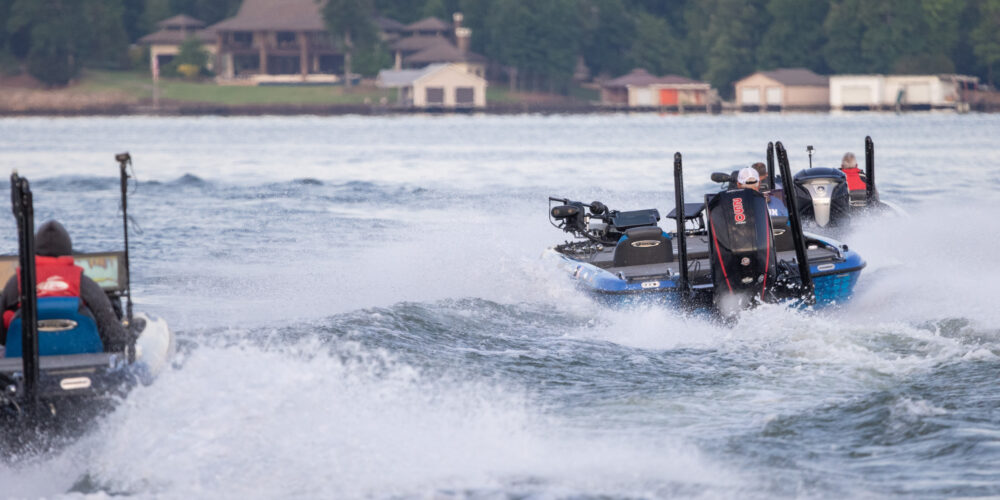 GUNTERSVILLE, Ala. — Every competitor can find a bite now. Every angler is a threat to find the right fish. From 50th place Bill McDonald, who boated 19-9 on Day 1, to first place Spencer Shuffield, who has cruised ahead of the field so far, the remaining anglers at the Tackle Warehouse Pro Circuit Presented by Fuel Me event on Lake Guntersville are all capable of making Championship Sunday.

Second place Lane Olson soared into the Top 5 after finishing 70th on Day 1, evidence to the potency of a resurgent Lake Guntersville, whose proliferation of big mouth beasts can turn an average day on the water into a memorable one within minutes. Olson wrapped Day 2 with a 26-14 bag that he said included one fish in the 2-pound range. That’s the level of quality beneath the waves at Guntersville, though eelgrass and bass transitioning between shallow spawning areas and deep water can make that quality difficult to find.

For anglers gunning for the Top 10 today, finding those quality kicker fish is essential. In the first two days of competition, 23 bags of more than 20 pounds have been brought to the weigh-in stage. No doubt, the majority of Saturday’s field will be aiming for similar weights to propel themselves into a Day 4, where weights are completely reset to zero.

Weather has played a factor at this week’s tournament, particularly in the realm of fish positioning. Anglers that found bed fish during practice have suddenly been forced to reassess their strategies, as the last of the lake’s spawning bass make their way toward summertime holdouts away from warmer shallow areas. What looked like an immediate warming trend has—for now—subsided as cloud cover moved into the area. Shifting winds threaten to alter patterns established earlier in the tournament.

Additionally, the Tennessee Valley Authority (TVA) cranked up the current on Day 2, resulting in denser schools of fish. Anglers are still sifting through small fish with a combination of deep-diving crankbaits, spoons and jigs to boat meaningful weight.

The bass aren’t all deep yet.

Schools can be found roaming around the lake in new places from one day to the next. Though bites abound throughout the fishery, catching quality fish amidst masses of 1-pounders is going to be the key to fishing on Sunday. The temptation of a guaranteed 14-pound limit up shallow remains in play for the likes of Shuffield, Olson, Michael Neal (third place) and Nick Hatfield (fourth), who simply need to make the final cut to fish for a title. Meanwhile, the right combination of big bass offshore can propel the bottom of the pack into a single-day, 10-boat tournament for all the marbles.

In other words, the final Top 10 is very much up for grabs. It only takes one missed fish to fall out of Championship Sunday and one bite at the right moment to slide in.

That pressure has led to tension above the waves as anglers vie for a shot at $100,000 and a Tackle Warehouse Pro Circuit victory on the most storied bass fishery on the planet. Who will make the cut for the final 10? Stay tuned to the MLF NOW! live stream throughout the day to find out.