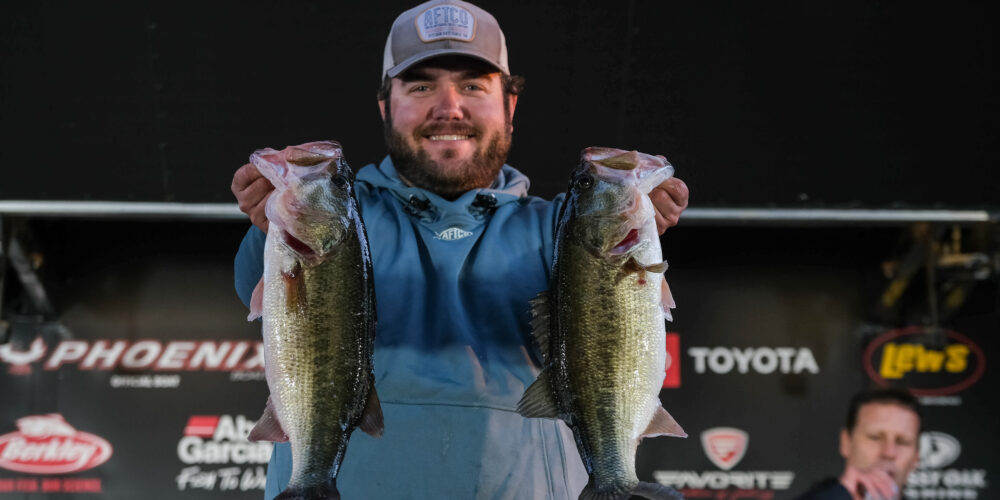 Michael Neal is starting off 2022 right where he left off in 2021 – as the hottest angler in the sport.

The reigning Angler of the Year has been on an absolute tear, winning his last Bass Pro Tour event and notching five consecutive Top 15 finishes on the Tackle Warehouse Pro Circuit last year. And with a 15-pound, 2-ounce bag of Sam Rayburn bass today, he pushed that streak to six consecutive Top 15s as he sits atop the leaderboard with 33-9 total.

That obviously puts him in the rare position for back-to-back victories. However, it might be a bit tougher than in years past, as the weights are zeroed and the entire Top 10 has a one-day tournament to see who takes home the win in Guaranteed Rate Stop 1 Presented by Ark Fishing.

Then again, considering how tough Rayburn is fishing and his personal history here, he’s just thrilled to have gotten this far.

“I’m not even thinking about the win,” Neal said. “I usually do terrible in Texas. I had a 60th here in the only MLF event I’d fished and on the Bass Pro Tour last year, this was the only place I didn’t get a check. So, just to come here and do decent is redemption enough.

“But that being said, I won with smallmouth last year, and I never thought that was going to happen. So maybe my first five-fish win will be in Texas.”

With what he saw and figured out today, that definitely could be the case, as the typically calm Neal couldn’t hold back some excitement.

Like on Day 1, Neal started today in the Canyons area, which unfortunately was a parking lot of boats most of the morning. At one point, our on-the-water crew counted close to 40 boats, as anglers from the Pro Circuit, locals and a high school tournament all collided in the known hotspot.

Needless to say, the pressure hurt the fishing, and Neal managed just one fish to start his day and only had a small limit of 9 ½ pounds even into the afternoon. Fortunately, around 4 p.m. he figured something out and was able to make three huge culls right before coming in to weigh-in.

“My last cull came on my last cast, and it was a 4-pounder,” Neal said. “I left my bait in the net hanging off the end of the rod on the way back. I figured I was one bite away from making the cut. So, I pushed it to the wire.”

He’ll have to push that potential new pattern even harder on Sunday to try to win, as he figures the lake might finally show out and “everyone is starting from scratch.” And while the zeroing format is something he’s quite familiar with from fishing the BPT, his experience might actually hurt him more than help.

“The thing about [how it works on the BPT] is you still know where you stand with SCORETRACKER,” Neal said. “I won’t know that tomorrow. It will still be like today where all day I’m wondering if they’re catching them or not. Is it as bad as I think it is? So, it’ll be interesting.”

Anyone watching the live leaderboard tomorrow won’t have to wait long for updates. If things hold like they have the first two days, Josh Butler should light it up quick.

Just like on Day 1, Butler got to his starting spot and had four fish in the first 5 minutes, including a double. Unfortunately, that bite has fizzled quick. Thursday it was done by 7:45 a.m. Today, it was over by 7:30 a.m.

“I literally maybe had 10 minutes,” Butler said. “After that, I just had to grind it out. The fish are still there, but they just shut off. And I didn’t get any big bites today like Day 1.”

Now, with less pressure and a warmer morning more similar to Thursday predicted for Sunday, Butler is optimistic his morning flurry can last a little longer. If it does, and he can get a few more quality bites, he’s excited for his chances.

Jeff Bridges is all about quality this week. It’s just whether or not he can get them in the boat.

“I lost a big one, an 8-pounder or better,” Bridges said. “I pulled on her and she pulled me away. I couldn’t turn her and just pulled off. And I lost a 5-pounder, too.”

Had we been in the old format, those lost kickers could’ve been a killer for his chances at the win. And, had he caught them, he could’ve really given himself a major cushion going into the final day. But with the weights zeroed, it really doesn’t matter.

What does matter is he has a pattern that’s getting numerous big bites, and he has it all to himself. It will just be a matter of getting them in the boat when it really counts on the final day.