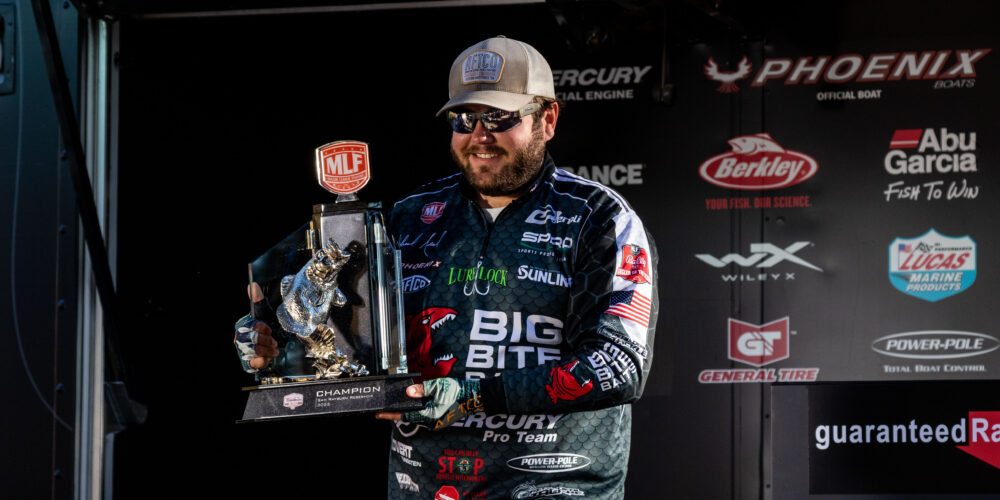 BROOKELAND, Texas – It’s simple: Michael Neal lived up to his nickname. Today, he once again was the “Real Deal.”

Technically, every angler launching on the final day of the Tackle Warehouse Pro Circuit Presented by Fuel Me event on Sam Rayburn had an equal opportunity to win, as the weights were zeroed. In reality, today was all about Neal and what the hottest angler in the sport could do.

The reigning Angler of the Year cracked the biggest bag of Guaranteed Rate Stop 1 Presented by Ark Fishing, 26 pounds, 5 ounces with an 8-9 kicker, to take home his second major victory in four months. And the scary thing is, he lost some fish today he figures could’ve pushed him to the 30-pound mark.

When you have momentum in this sport, it’s remarkable what an angler can do. And no angler may have more momentum than Neal right now.

“It’s all momentum,” said Neal. “Winning Angler of the Year and then my first tournament in a catch-all-you-can-catch format (the Bass Pro Tour event on St. Clair) and now winning my first five-fish format event. It’s just momentum.

“I think coming back to the circuit where I got my start, it’s come full circle. This one might be the most special of the three.”

Today certainly was a special day almost from the start for Neal thanks to a key decision.

While he had been starting in the Canyons area the previous two mornings, he figured the pressure might’ve gotten to those fish. Plus, he’d realized late on Day 3 the fish might be moving shallower as the weather warmed.

Thus, Neal called an audible and went to a drain in front of Mud Creek to start. It was nothing special. No cover or anything on it, but he’d seen fish on it in practice and caught a good fish on it at the end of Day 3 right where the drain hit the flat at the mouth of the creek. But even he didn’t realize its full potential until the 8-9 kicker hit his net.

“That big fish was one of the bites I knew I needed to win,” Neal said. “When I caught her, I knew I had a legitimate shot. That said, I thought there would be multiple 20-pound bags today. So I figured I needed some more 4s and 5s to go with it.”

Well, he found those all throughout the day, as every move he made was the right one, especially his decision to switch lures.

One of the biggest things Neal attributes his recent success to is an open mind to trust his gut. In the past, he admits he’d come to a tournament with preconceived notions or would try and make the fish do what he wanted.

“Now I don’t second guess myself,” said Neal. “If I need to pull the plug and change, I do it. This tournament was a great example when I went shallow and started throwing a jerkbait. Previously, I never would’ve done that. I would’ve lived and died with a drop-shot out deep like I started the tournament. Today, all my fish came on a jerkbait.”

Neal had three jerkbaits on deck that he’d call upon depending on depth, with one of them being a SPRO McStick 110 (blue bandit) thrown on 10-pound test Sunline FC Sniper fluorocarbon. He also utilized a SPRO Little John Micro DD 45 (clear chartreuse) and a Big Bite Baits Suicide Shad (blueback herring), which came in clutch on Day 3.

However, he got to the final day in large part because of a drop-shotted worm on a 1/0 Gamakatsu G-Finesse hook and 3/8-ounce weight. Despite feeling like he was fishing on St. Clair while using it, he caught the majority of his weight the first two days on the finesse technique.

Of course, that piece is kind of fitting.

When Neal won on St. Clair last fall, he did so on smallmouth – something he thought he’d never do. The other thing he figured he’d never do is win in Texas – a state that had haunted him in the past; a past that had been filled for so long with almost and so-closes.

Now, that’s all in the past. The “Real Deal” is just that, and today, he proved it.