New Year, New Way of Life for Kyle Cortiana in 2022 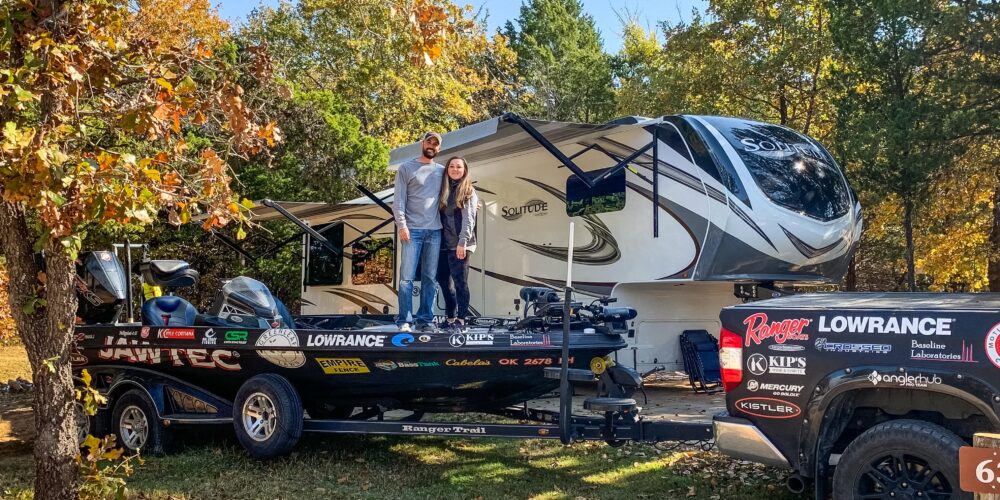 Kyle Cortiana and his wife, Miranda, are looking forward to living on the road for the 2022 tournament season.
November 28, 2021 • Kyle Wood • Tackle Warehouse Pro Circuit

Since his first year of fishing the Tackle Warehouse Pro Circuit Presented by Bad Boy Mowers back in 2017, Kyle Cortiana has been trying to balance traveling and fishing professionally along with a full-time job. While he’s had some success over the years, he knows he hasn’t lived up to his true potential as a professional angler – or at least hasn’t been able to devote himself as much as he needs to. That’s why he and his wife, Miranda, sold their house, quit their jobs, bought a camper and are hitting the road for the 2022 season.

Time to Give 100 Percent to Fishing

Cortiana won Angler of the Year in his first season fishing the Toyota Series Southwestern Division in 2016, thus qualifying him for the Pro Circuit in 2017. Though he was thrilled with the opportunity, he admits he wasn’t totally prepared to make the jump.

“I didn’t know I was going to fish professionally, I wasn’t even actively pursuing it,” Cortiana says. “So when it fell in my lap back in 2016, I had a full-time job but I knew I had to try to make it happen. I was a civil engineer, my wife had a job in healthcare and we didn’t have a lot of money saved up for tournament touring, so it was a big deal.

“I maintained a full-time job for the last five years of professional fishing, and the engineering firms I’ve worked with have been really supportive and let me keep fishing. But the truth of it was, I knew deep down that I wasn’t as good of an engineer as I could be, fishing professionally and I wasn’t as good of a bass fisherman as I could be with a full-time engineering job. I knew at some point something would have to give.”

Having built a home on five acres in Coweta, Oklahoma, the Cortiana’s plan was to raise a family there. Plans change, however. With the housing market being in favor of selling, along with the fact Miranda and Kyle got a taste of what living in a smaller space was like this past year, they figured there’s no better time than now to make a move.

“Miranda got to come with me to that (Bass Pro Tour) event I made at the Harris Chain and we stayed in a little 600-square-foot space above somebody’s garage,” Cortiana says. “It was just somewhere you could sleep, make coffee and go to the bathroom all in the same little area and Miranda said, ‘We don’t need anything more than this do we?’ and I told her I don’t need anything. I could live in a tent, I’ve always been that way. We kind of realized that we work real hard to keep the house we built and the mortgage, but we didn’t need it.

“We don’t have children and our dogs are gone so we don’t have responsibilities, and Miranda threw out the idea that she’d love to spend more time with me since we don’t get to take vacations together. If we sold the house and she quit her job and bought an RV, she could come with me and I loved the idea.”

By the time summer rolled around, Cortiana was basically sold on the idea of hitting the road full time and after a tough battle with COVID in August, it made his decision even easier.

“I was really, really ill with COVID,” he says. “To be honest, I thought I was going to die. It made it a lot easier to say we should both be quitting our jobs and selling our home, so we did. We paid off most of our debt and we’re going to try this living in a fifth wheel thing for two years.”

Swapping their house for a fifth wheel meant the Cortianas had to get the right gear to make traveling and living around the country a breeze. Lucky for them, they have plenty of friends and family that could provide them with advice.

“As far as which camper to get, my wife’s parents have always been big campers, and her grandparents, so we had a lot of confidence reaching out to them asking what were good campers and not good,” Cortiana says. “James Niggemeyer is a good friend of mine, and I definitely talked to him quite a bit because he’s had a lot of campers.”

After doing their research, the Cortianas pulled the trigger on a new setup this fall.

“The biggest thing was making sure it was our home, not our temporary place,” he says of choosing a camper. “We had to get over the hurdle of a price tag or something like that because we don’t get to leave this place. This is my home now. So, we bought a beautiful RV from Camperland of Oklahoma. It’s a Grand Design Solitude 345GK. We love it. It’s cozy and has all the amenities that one would need. We got our king-size Tempur-Pedic mattress we’ve always had to fit in the bedroom, which is good because I can get some serious back issues like most bass fishermen can, so I got to have my mattress.”

The Cortianas also bought a new Ford F350 dually, and it’ll be up to Miranda to drive it around the country, camper in tow.

“She ain’t scared of it,” Cortiana insists.

With his wife at the helm of the big rig, Cortiana will be driving his Toyota Tundra and boat behind his wife as they start to move across the tournament scene.

Knowing he won’t have to worry about driving all night from a tournament to get back home and jump right back into his civil engineering job is a huge weight off of Cortiana’s shoulders. Though, he doesn’t underestimate the importance of taking on his new role of a full-time pro.

“With us not working now, I’m going to try and fish more tournaments than I ever have,” Cortiana says. “I’ll fish the Pro Circuit, Toyota Series and the BASS Opens. It’s going to mean we have to try and minimize travel so it’ll mean a lot of looking at the map and going from A to B, B to C on our little tour to fit in tournaments that make sense with the travel. I’m even going to try and do a little guiding on the side and stay after events if the schedule allows and take people out and show them what I learned.

“I’m also excited to actually get to go prepractice places. I’ve never got to prepractice a single event in my five years on the [Pro Circuit]. I’ve always had three days or two days of official practice to figure out a lot of brand new water. And I’m really looking forward to getting to do that.”

Another bonus for Cortiana living on the road is that he believes he’ll finally be able to help his sponsors more than he ever could.

“I’ve always wanted to give back more to my sponsors than I could and now I’ll have that ability to,” Cortiana adds. “Say a sponsor has a new bait out and they want me to catch a fish on it, we’ll I can go make a video on it in an hour. I’ve never been able to offer things like that.”

“It won’t take me a month now to get a video out,” laughs Cortiana. “I can actually sit down and focus after the derby and get some videos out to keep them a little more relevant. And we’re also going to start another YouTube channel come January of us just living in the fifth wheel, so not solely based on fishing, but show the other side of it.”

Though Cortiana’s AOY finishes on the Pro Circuit have been solid, he’s excited to see what constantly being on the water will do for his career and his mindset.

“I’ll have to provide for my wife and me and I wonder if that’ll change my behavior, too. In the past I still had a job, so making a check may not have been as important. There’s going to be some changes and I sure hope that I can see some success from them.”