Prospecting in Pool 9 with Michael Neal 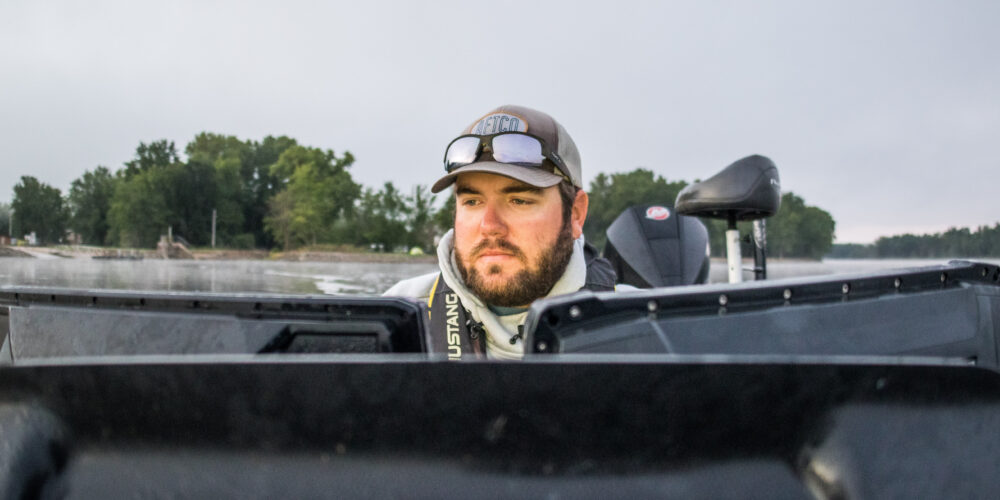 With a day of practice already under his belt, I joined reigning Angler of the Year Michael Neal for his final look at the Mississippi River before the Tackle Warehouse TITLE Presented by Mercury gets underway. Going down out of La Crosse, Wisconsin August 17-22, the TITLE is the culmination of the Tackle Warehouse Pro Circuit Presented by Bad Boy Mowers season and another opportunity for Neal to burnish an already fantastic season.

Dropping water, mobile fish and an ever-changing bite have characterized practice so far, so Neal hit Pool 9 with his hopes a little tempered. Still, you can never count out the AOY, and getting to ride with one of the hottest anglers on the planet is a treat any day.

Putting in down in Pool 9, Neal is coming off a less than stellar start to practice – he didn’t manage a limit all day in Pool 8. So, he was eager to give the lower pool a try, which he’s fished before with success despite the hassle of locking through and the length of the run. Dropping the boat in quickly, Neal fires up his electronics and cranks his Mercury to run down to the lower end of the pool as the sun rises.

“Hopefully I can catch one,” Neal says as we idle away. “Maybe two, but they won’t be big. After yesterday, I’m just being realistic.”

Setting down near the mouth of a side channel, Neal pulls out a few rods before getting up to fish. It’s nothing fancy – just a couple of baitcasters with a swim jig, vibrating jig, a wobble head and a couple of spinning sticks with finesse stuff. Right off the bat, things aren’t quite right on his starting spot.

“I have always heard about how much the river changes and I’ve never seen it until this year,” Neal says. “Now, sandbars I fished last year don’t even exist. This was a ditch that had grass growing in it, not these reeds – that’s why I couldn’t find it, I thought it was all blocked in.”

Easing up into the side channel, Neal starts his day with a vibrating jig thrown along the edge of the grass. It looks good, but doesn’t provide any takers outside of a small pike. At the end, where the channel joins the main river again, Neal makes a few casts with a wobble head over a sand flat before pulling the plug.

Running out of the chute and across the river, Neal pulls up to some barges and rip rap and gets to work with the swim jig.

I ask him why he chose Pool 9 to look in today, considering Pool 7 is a quicker run from takeoff and a bit more manageably sized.

“I hate 7,” Neal admits. “I spent one day in 7 when [Bryan Schmitt] won. And the Top 10 day of the REDCREST [Edwin Evers] won was up there and I finished bottom of the barrel. I just don’t like it there and I don’t know where to go.”

Working the swim jig along some rip rap, Neal hangs into a largemouth that looks like a 2-pounder. Unfortunately, it comes free before getting in the boat. With that, it’s time to really try for some smallmouths.

Pulling out a shaky head and a wacky rig, Neal starts hitting wing dams. Idling up to them and fishing along the length of them while paying close attention to his Humminbird 360 and Garmin LiveScope, Neal proceeds to get no bites as he hits a handful of targets around Lansing, Iowa.

The river is currently adjusting from a sharp rise, a drop and some stabilization, and is now undergoing another drop. Neal thinks it has the fish a bit difficult.

“I think this would have been a much better tournament if the water had stayed down,” Neal says. “In any kind of river, when the water is down it congregates the fish more.”

Eventually, after a few more unproductive wing dam stops, Neal pulls the plug on this stretch of the river and we sprint down to the lower end of the pool.

Down at the lower end, Neal gets a bass in the boat – it’s unfortunately about as long as his worm. After running a few more wing dams, including trying to find one that is on both of his maps and doesn’t seem to exist, Neal pops up to the head of a rip rap-ringed island.

Dropping the trolling motor, Neal works up an eelgrass and rock edge with nothing to show. Then, at the point of the island, things get real. Casting around with a swim jig, Neal puts his first keeper of the day in the boat – a nice smallmouth. Then, he adds another, loses a couple and catches a few more of mostly small size. It’s not a big fish hole, but there are plainly fish feeding and biting here.

Casting around, Neal stays on the spot for a pretty good bit.

“I’m trying to figure out if there’s a certain place the school sets up or something,” Neal says. “I mean, I ain’t caught but two keepers – it’s a long way to run for 8 pounds.”

After losing another 2-pounder, Neal decides to keep rolling, not convinced he’ll be back.

The next few stops are more of the same – rocks or wing dams and tiny smallmouths. It’s not what you want, and Neal knows it.

“If I caught some fish I’d stay all day,” he says of the Pool 9 excursion. “But, at this point in time that does not look promising.”

At around 10:45 a.m., Neal makes the call to head back to the ramp and change pools, determined to figure something out in Pool 8. Along the way, he runs into Wesley Strader long enough for the two Tennesseans to bemoan their fate. Then, he loads onto the trailer and heads north without turning his graphs off, ready to use every second of the day to find something before the championship starts.