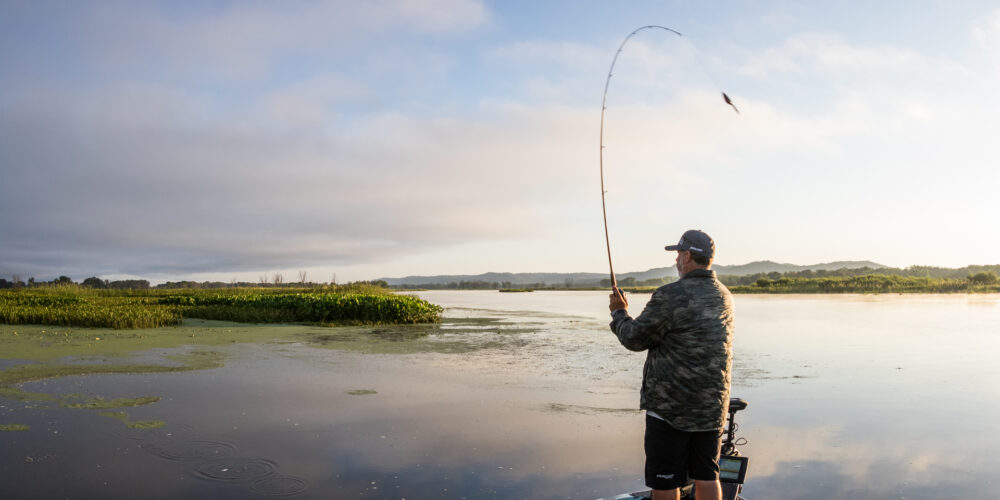 With just two days of practice to get the pieces of the puzzle collected on the Mississippi, I got the invite to jump in with Salewske for his final morning of practice on Pool 8 to see how the California pro is handling the ever-changing Mighty Miss.

We meet at Goose Island State Park around 5:30 a.m. on a clear, cool Sunday morning. Salewske has only been to this stretch of the river one other time – which was last year during the Pro Circuit Super Tournament – so he’s chosen to put most of his time in on Pool 8, which he’s the most familiar with.

After splashing the boat, Salewske makes a short drive up the river before setting down and getting to work.

We stop on a stretch that Salewske has fished in the past and he reaches for a swim jig to get the ball rolling.

“This is a place I would normally just fish in the tournament and not practice on, but things haven’t been easy this week so I want to see if I can at least get a bite in here,” says Salewske.

After fishing for several minutes, Salewske realizes that things have changed in the area.

“I think the water has dropped a foot overnight,” he says. “And the flow through here is usually really good, like, the current crashes off of these banks, but it’s really poopy right now.”

Fishing along, Salewske gets a phone call from fellow competitor and travel buddy Mike McClelland. The two talk about the day, as McClelland plans to spend some time up in Pool 7. With their morning plans figured out, the two hang up and get back to fishing.

Salewske grabs a walking topwater to cover some ground across a shallow sand flat, which he admits isn’t something he’s had success with in the past on the river.

“I’ve never caught a topwater fish, other than on a frog, on the Mississippi, but I know guys crush them on it,” he says.

With no takers on top, Salewske pulls the trolling motor and makes a move.

The short run brings us to some beautiful-looking grass and duckweed. Salewske grabs the swim jig first before making a few casts with a frog.

“I just haven’t been able to get that many bites on a frog until later in the day,” Salewske says. “I still haven’t got that many bites on it, but I know guys are going to catch them on it. They always do. I don’t know if the falling water has anything to do with it, but I thought it was supposed to be easy to get a frog bite.”

Switching back to the swim jig, Salewske connects with his first bite of the day. It’s no giant, but it’s nice to get the skunk out of the boat and know you’re around the right species.

“Normally I like flipping wood here, but I can’t get a bite on it, so I’m trying to stay away from it,” he says. “Maybe with the water coming down they’ll get back on it.”

Trolling up a ways, Salewske stops on a sand drop and fires out a shaky head. He gets bit almost immediately, but it isn’t the size he’s hoping for and he’s thinking it’s time to make a move.

Salewske takes a minute to dig out a new trailer for his swim jig before grabbing his coffee and doing a bit of map study. He doesn’t save waypoints from year to year, so he’s trying to scour the map to look for areas that look similar to where he’s caught fish before.

After a few minutes, we’re rolling downstream on the hunt for new water.

Salewske covers some ground with a swim jig in the new area before picking up a topwater and almost immediately connects with a solid smallmouth.

“Hey, that’s my first topwater fish here,” he jokes. “I’m afraid that fish is alone and I think that’s how my tournament will go, just catching one here and one there.”

He makes a few more casts with no takers or followers before cycling through a few different rods to see if the smallmouth has any buddies in the area.

Salewske’s rod selection is pretty light as he’s not one to overcomplicate things. He’s got a walking topwater, frog, swim jig, Texas rig, swimbait, crankbait and shaky head on the deck – which covers the bases for the river.

While he casts around, I ask him how it feels to have another top-30 finish in the Angler of the Year race for his second-straight season.

“I couldn’t be happier,” he says. “I think a lot of it has been my mindset. I don’t have my business to worry about back home. I can FaceTime my grandkids and my wife, Kelly, has been traveling with me.

“I also think the two days of practice we get has made me make decisions quicker and I don’t think that’s a bad thing.”

Fishing his way down one of the many side channels off the main river, Salewske has a tiny smallmouth slap his swim jig out of the water. He quickly fires a shaky head back in and connects with a decent largemouth.

“That’s what’s so cool about this place, you can catch smallmouth and largemouth together almost anywhere on the river,” he says.

Taking a moment to repair his worm for his shaky head, Salewske then slides up to a sand drop that looks intriguing. Much like the sand drop he fished this morning, it doesn’t take long for him to get bit.

“Man, that’s close to being a keeper,” he says. “They have to be 14 inches and that one is close. I’ve been getting bites, but I can’t find a good average size.

“I’ve seen the power of Pool 8 from prepractice and I think with the water stabilizing it should get better, but I’m also starting to think I might want to check a few things out up in 7. We’ll look at a few other places and then I’ll make a decision on if I stay or go.”

As we weave our way through the backwaters, Salewske points out the water line on the grass to further prove how much the water fell overnight.

“That’s a big drop considering how low the water is,” Salewske says. “That’s why the current has been different in some of the places I’ve checked. It’s crazy.”

Taking his time idling through some shallow stretches gives Salewske time to think on if he wants to trailer up to Pool 7 or keep probing along in 8. Cracking a fresh bottle of water gives him the clarity he needs to make a decision.

Pulling back to the ramp I take a moment to ask Salewske what it means to have won the TITLE and to be back with another shot at making history.

“I cherish it,” he says of the win. “I’m proud to be in an elite group of guys who’ve won championships before. It’s unbelievable to think about. I need to find a little more than I have if I’m going to do it again this week, but I’ll be swinging once the tournament starts.”