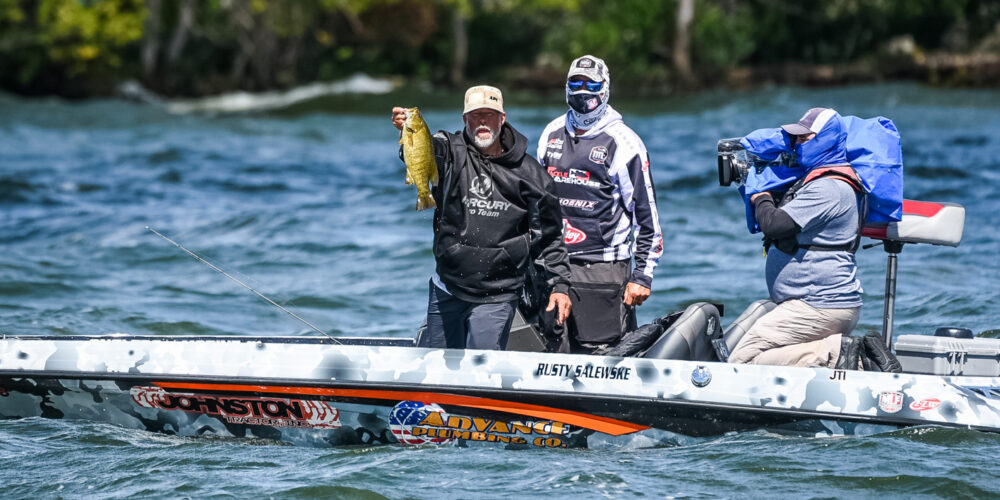 STURGEON BAY, Wis. – After five days of mostly wide-open smallmouth-catching activity, a new competition format and anglers sparring with each other on SCORETRACKER®, the final day of the 2020 Tackle Warehouse TITLE presented by Toyota came down to the most basic difference-maker in bass fishing: an angler making a move based on his gut.

For Southern California pro Rusty Salewske, that move was worth $200,000 and the first-ever TITLE championship belt.

Shortly after peeling away from the shoal he had been fishing most of the day on the lee side of Snake Island outside of Riley’s Bay – the bay just north of Little Sturgeon Bay – Salewske caught two smallmouth in the final 42 minutes of the event. That included a 4-14 with 12 minutes remaining that catapulted Salewske past Bradford Beavers and into first place.

Salewske, a San Diego-area pro who finished fifth in the 2009 Forrest Wood Cup and then took nearly 10 years off from tour-level tournament fishing before the 2020 season, stacked 28-15 on SCORETRACKER® in the first period and hovered in the top three until early in the second period. But Salewske couldn’t relocate a consistent bite for the next 4 hours, slowly falling behind Beavers before chipping away at the lead with a 4-0 and a 2-15 before connecting with the winning fish.

“It was a tough, tough day out there,” Salewske admitted. “I just kept fishing – what else was I going to do, right? I finally decided that I had to make a move and came into this little spot where I had caught one 2-pounder in practice. Just about every bait on my deck is from (fellow FLW pro) Wade Strelic – I ran out of baits, weights, everything, and Wade helped me out.”

For more about today’s Championship Round, head to FLWFishing.com.