Shuffield Coasts into Final Day, Everything’s in Play on Guntersville 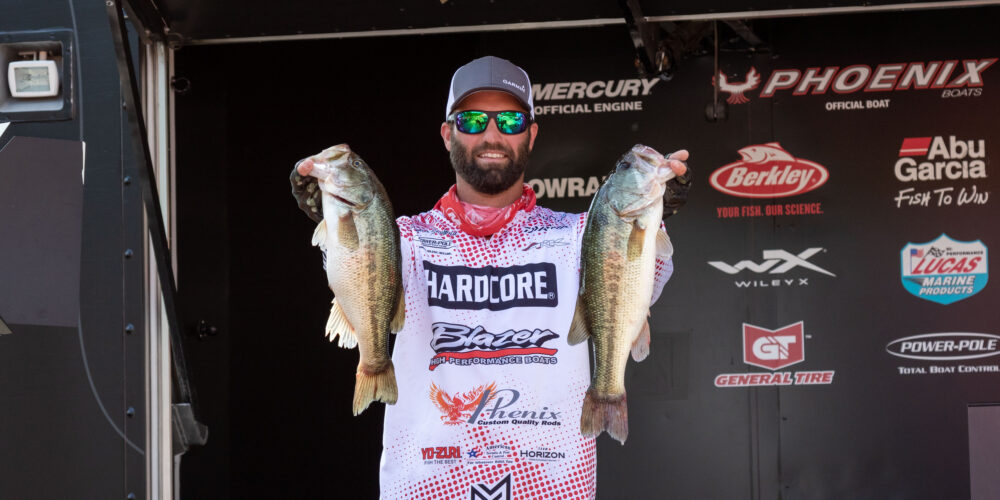 GUNTERSVILLE Ala. – The biggest weights were in the 60-pound range but the most important numbers are all zero. Ten anglers remain from the original field of 156 at the Tackle Warehouse Pro Circuit Presented by Fuel Me event on Lake Guntersville, and they’ll square off against each other with an even playing field on Championship Sunday.

Spencer Shuffield led the pack all week and remains a favorite to take home a Pro Circuit victory tomorrow. Shuffield has been on the fish offshore and hasn’t let up steam despite what he says was his best effort at doing so. Shuffield’s combined three-day total of 63-7 is a testament to the quality of fish to be found on Guntersville – fish that he says anyone could find on Sunday for a huge win.

“Tomorrow I am not holding back for nothing,” Shuffield said. “I have a spot that I found in practice that is loaded with them. It has had two to three guys on it every day. I guess they didn’t make the Top 50 because they weren’t there today. I rolled up this morning and caught five real quick. I can’t wait to get on them tomorrow.”

Shuffield says he is still throwing a Hardcore Bullet Crank 7+ in more than 20 feet of water. He’s being careful to work the bait around the lake’s prolific population of aquatic vegetation, which is proving to be both a blessing and a test for anglers.

“I’d rank the fishery right up there with Champlain right now,” Shuffield said. “It is phenomenal, and that’s strictly because of the grass. If this grass died, the fishery would die with it. That’s why it is so awesome right now, make no mistake.”

Shuffield expects a 23-pound limit to put Sunday’s competitors within striking distance of a victory, but also says the potential for a 30-pound bag is “very, very high” for competitors fishing both shallow and deep.

Set to be married next weekend, East Tennessee native Nick Hatfield boated 21-15 on Day 3 to finish the first leg of the event in second place overall. Though he’s from the Volunteer State, Hatfield said frequent trips to Lake Guntersville throughout his life make the opportunity to fish for a championship a special one.

“My dad has had me down here my whole life,” Hatfield said. “Even though I’m from Tennessee, I’ve spent a lot of time down here. I want to win so bad. I’ve been close. It would mean the world.”

Hatfield fished both shallow and deep on Day 3, but says most of his fish were boated early. With more than 20 pounds already in the boat, Hatfield spent the rest of the day scouting opportunities for Championship Sunday. He plans to focus on deep water in a swing for the fences that could change his life.

Lane Olson made the final day on the heels of an epic comeback that saw his daily totals skyrocket from 15-10 on Day 1 to 26-14 and 19-1 on the second and third days. Now, the 21-year-old pro is solidly in the hunt for a Pro Circuit championship 2,500 miles from his hometown of Forest Grove, Oregon.

“The guys that I fish with back home inspire me,” Olson said. “We have won a lot of tournaments at home and you just have take them one at a time and put them in a box. Don’t get too worked up. If you get too worked up, you never catch them.”

This week’s event marks the first time Olson has spent any significant time on Lake Guntersville; however, the Columbia River has provided a fertile training ground for learning how to target fish in current. If the dam starts pulling significantly on Sunday, watch for Olson to make a move. He’s relying on flutter spoons, hair jigs and deep crankbaits to get the job done offshore on spots that he said he “stumbled on.”

Pickwick Stumble a Thing of the Past for Neal

Reigning Tackle Warehouse Pro Circuit Angler of the Year Michael Neal continued a strong tournament with a 19-9 effort on Day 3. The Dayton, Tennessee, local has been red hot since winning the 2021 Bass Pro Tour event on St. Clair and taking home Pro Circuit AOY. Unlike most in the Top 10, Neal says he has yet to find a loaded offshore school. Instead, he’s running and gunning from waypoint to waypoint, harvesting a single fish at a time.

Though the smart money may be on an angler with a reliable honey hole to bring home a win, Neal’s alternate tactic and lava hot lines cannot be counted out.

“Somebody’s going to have to have three or four 5-pounders to win this deal,” Neal said. “I’m looking for a bigger bag than Day 1. Let’s see if I can go find it.”

Steadily climbing the leaderboard all week is reigning REDCREST Champion Bobby Lane. If there’s any angler that can heat check alongside Neal, it could be the pride of Lakeland, Florida. Lane has boated back-to-back 22-pound limits after a relatively slow, 14 pound start.

“I have seen enough fish to win the tournament,” Lane said. “Now, getting them to bite is a different story. I am comfortable doing what I am doing though, and the worst I can do is 10th tomorrow. I went from ashes to roses. All the heartache is off and the weights are zero. Now, you can go out and hope to catch every one that bites.”

Along with Ron Nelson, Lane will look to buck the trend on the Tennessee River and shoot for a winning bag shallow on the final day.