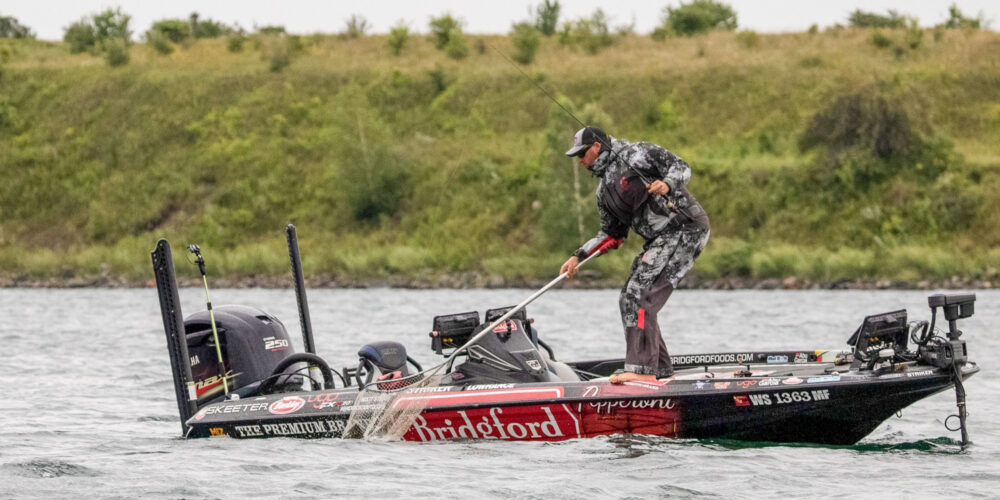 Matt Stefan might be fishing his way into the TITLE with a good Day 2 morning on the St. Lawrence. Photo by Jody White. Angler: Matthew Stefan.
July 30, 2021 • Mason Prince • Tackle Warehouse Pro Circuit

MASSENA, New York – The man who rarely gets a day off was the leader heading into today’s second day of the Savage Arms Stop 6 of the Tackle Warehouse Pro Circuit on the St. Lawrence River. John Cox came into Friday with some momentum after stringing together a 24-pound, 12-ounce bag of smallmouth on Thursday, but he’s had somewhat of a slow start on the U.S.-Canada border this morning.

Cox caught his first smallie at around 8 a.m., but it was a good one coming in at just over 4 pounds. He’s added another 2-pounder, but currently sits in eighth unofficially.

The weather may be playing a factor for Cox and the rest of the field. Clouds and heavy winds have some of our on-the-water photographers saying it feels more like October on the St. Lawrence River than late July. Add in some significant chop thanks to the wind and it’s been pretty rough out there for the 150-plus pros.

Miles Howe is unofficially sitting in 10th place and has caught three bass so far today. He caught up with one of our photographers and said that the wind is repositioning the fish that he found through practice and the first day of competition. He says he really likes the cloud cover, but the wind and waves are giving him issues locating more fish.

Matthew Stefan already has a limit for around 15 pounds, which has him in second place unofficially. The Wisconsin pro weighed in 22-7 yesterday, good enough for fifth place on the leaderboard. With five fish already in tow, it’s culling time for Stefan.

He mentioned to one of our photographers that, “I have my limit, I think that’s going to get me into the cut, and that will get me to the championship” referring to the Tackle Warehouse TITLE. Stefan entered the tournament right on the bubble and needing a strong event to qualify for the championship event, but it looks like he’s doing the necessary work.

Stefan said he’s found a new angle in a current break, resulting in his latest two fish in two drifts.

Jon Canada is currently the unofficial king of the hill on Day 1 with over 21 points in his livewell. The Alabama pro spent the majority of his morning in Alexandria Bay and it has proved to be productive. The wind and waves haven’t bothered him much, as he unofficially sits in third.

Turning an eye toward the Angler of the Year race—leader Michael Neal has struggled mightily today with the changing weather conditions, only getting one fish in the boat for around 2 pounds. That has Neal in 30th place unofficially after beginning his day in eighth place thanks to 21-8 on day one.

Second-place angler in the AOY race is Skeet Reese, as he’s in sixth with a near-14-pound limit in his livewell. Reese entered the week with a 21-point deficit to Neal, and Neal might be doing him some favors if this morning is any indication. An AOY win this year would be Reese’s second AOY championship and his first since 2007.

Scott Dobson was a popular pick heading into the event, and so far, the Michigan-based smallmouth savant has proven the pundits right: Our unofficial tally has Dobson with 16-0 as of the middle of the day to add to his 20-11 on Day 1, and it won’t be a surprise if he culls up into the 20-plus-pound range again by the end of the day.

You might’ve never guessed that Alabama pro Alex Davis had never fished the St. Lawrence River before this week. Davis dropped 22-0 on the scales on Thursday, and by lunchtime had added another 8-8 to his livewell. Davis was already in pretty safe territory to make the TITLE coming into the St. Lawrence (he was 40th in AOY points), but seems intent on improving a few places.

Be sure to visit MajorLagueFishing.com at 3 p.m. ET for the live weigh-in show to see how Day 2 shakes out, and join us on Saturday and Sunday all day for full live coverage of all the action on MLF NOW!.