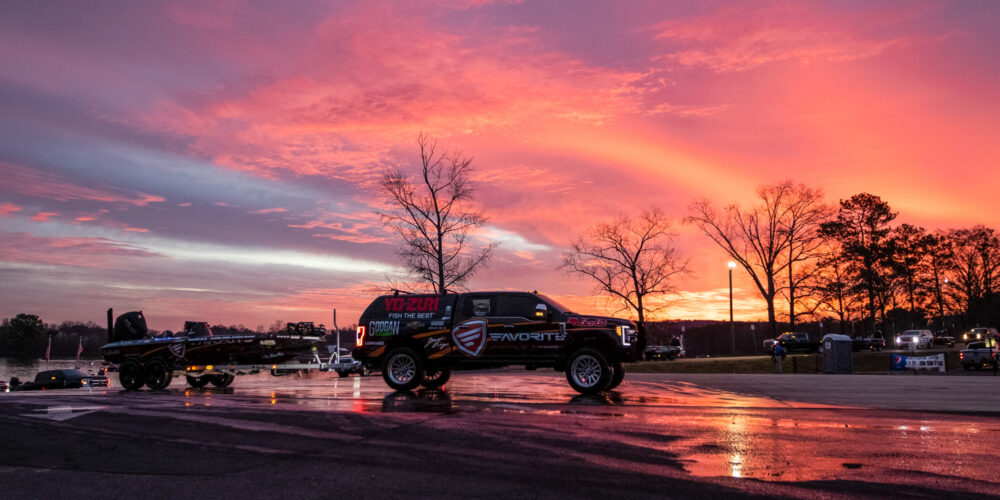 CULLMAN, Ala. – Day 1 of Covercraft Stop 2 the Tackle Warehouse Pro Circuit presented by Bad Boy Mowers on Smith Lake should be a good one. Taking off under warm, springy conditions this morning, there’s a good chance that the field will find spotted bass and largemouth chomping.

Some pros were cautiously optimistic after two days of practice, but many leave Smith Lake Park this morning scratching their heads. Though many of the anglers who plan on targeting shallow largemouth seem to think things are on pace or will improve in the tournament, the pros fishing off the bank for spotted bass aren’t as optimistic.

“It’s been a little stingy,” admitted Matt Becker, who made his first FLW Tour top 10 at Smith in 2018. “I was able to find a decent amount of fish, but they seemed highly pressured and weren’t reacting the way I thought they should. I’ve been deep, I figured it would be pretty early on in the spawning cycle. I’ve been targeting prespawners, or almost a late winter pattern. As practice went on, they seemed to be sliding a little shallower. I think they’re on the move, getting ready.”

One of the local favorites outside of Jesse Wiggins, Joseph Webster has a great track record on Smith and keeps a camper on the Sipsey Arm year-round. He hasn’t been practicing for the same fish as everyone else, but he’s reporting some of the same unexplained toughness.

“I had like a 6-pounder the first day and two keeper spots,” Webster said. “Yesterday I didn’t put my hands on a keeper. There’s no size, I think they’re so herring-oriented they just float around until it’s spawn time. It’s not good for me. I’d be tickled to death with two limits.”

Webster says the fish are headed to clay points and the like to spawn, but he’s tried (and mostly failed) to catch big ones offshore.

“I’m going to be in open water, over 100 (feet), way out on points,” Webster says. “They’re out deep, swimming in singles and doubles and busting. They’re the ones you want, but it’s nerve-wracking.”

Out deep or under a dock, Webster is having trouble triggering the bite, which is a common occurrence at the moment. It’s easy to spy a few spots on forward-facing sonar, but harder to put them in the boat.

“It’s like you see smoke coming off them going to (the bait),” Webster says. “When they get there, they just turn away. I don’t think it’s pressure, a lot of those fish are just out in the lake. I don’t know what it is. In pre-practice, they were spitting up herring that were 4 and 5 inches, now they’re spitting up threadfin. I don’t know what’s happened.”

This week promises some of the nicest spring weather Alabama has seen yet this year, and the warming temperatures mean that a prespawn tournament is far from a lock. Certainly, the tournament could be won solely with fish roaming the depths or staging to spawn, but this much warm weather and water temperatures already in the 50s mean bedding fish are almost inevitable.

On day one, the high is 74 degrees, which is actually the lowest high in the forecast. Each day is set to be mostly sunny, but the really notable weather is today and Sunday. Today, the wind should get up into the teens, which will get a good chop going in many places and perhaps stimulate the bite. On Sunday, a front is forecast to blow in, which could bring wind and perhaps some afternoon showers depending on the accuracy of the forecast.

As for general waters conditions on Smith Lake, you can find water in the 50s and likely some in the 60s by the end of the week. The water clarity is good near the dam, pretty clean in the Ryan Arm and a bit dingier than normal up in Rock Creek. Still, there’s no massive change expected that will push the conditions to exceptional levels in any direction.