TITLE Time on the Mississippi River 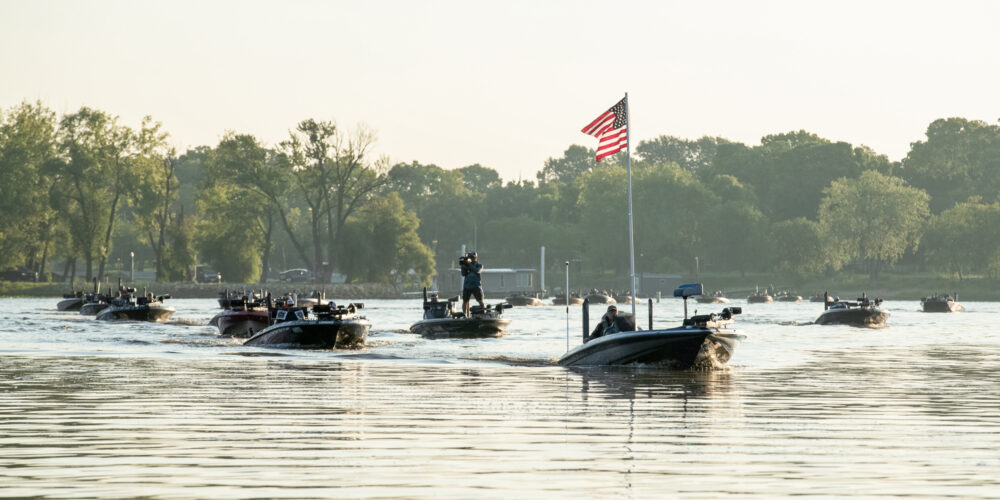 While the Tackle Warehouse TITLE Presented by Mercury doesn’t seem to be set up for a perfect scenario after a tough practice, Group A hit the river ready to rumble. Photo by Cobi Pellerito.
August 17, 2021 • Jody White • Tackle Warehouse Pro Circuit

LA CROSSE, Wis. – In the ideal scenario, a summertime event on the Mississippi River will be a frogging slugfest with duckweed-dwelling largemouths coming fast and furious, and some slammer smallies mixed in as well.

This week, the Tackle Warehouse TITLE Presented by Mercury doesn’t seem to be set up for that dream scenario, with many pros bemoaning a tough practice and low weights predicted. Still, a week of stupendous forecasts and a hopefully stabilizing river could get things moving in the right direction. Plus, it’s nearly a sure thing that at least a few of the 50 pros from the Tackle Warehouse Pro Circuit Presented by Bad Boy Mowers will figure something out.

So, buckle up for an interesting day as Group A kicks things off on Old Man River.

The Mississippi River is the second-longest river in the US, and certainly first when it comes to fame. While bass can be found throughout the 2,300 miles the Mighty Miss spans, the tournament waters for this competition consist of Pools 7, 8 and 9, with takeoff occurring in Pool 8. These three impoundments of the second-largest drainage system in North America provide a lot of cover for bass to live in. Vast swaths of vegetation, wing dams, cut banks, backwater pools and shallow laydowns can be found throughout the river.

Straddling the border between Minnesota, Wisconsin and Iowa, the river supports healthy populations of largemouth and smallmouth bass. Anglers usually don’t struggle to catch limits. However, it’s the bigger bass in the 5-pound class that cash checks. While smallmouths may not receive as much attention due to the fact that they can be tougher to target than their green cousins, they’re just as much a player and shouldn’t be overlooked.

Practice has been anything but easy for the pros this week and the river herself hasn’t cut them much slack. Mid-practice, the water level in Pool 8 fell about 1¼ feet, and it really only stabilized on the off day. The river had recently rocketed up from low and historically stable water and then back down. Now, the projections are calling for stable or slowly falling water for the coming days, which might kickstart the fishing.

“I can only go off of what I know, and I’ve probably fished five tournaments over the last 20 years here, and it might be the toughest I’ve seen it,” said Jim Moynagh. “Any time the river gets low, they group up, and you can find them and do well. That’s the way I feel, so, when the river is low, it should be easier. But, it’s actually harder for me.”

Of course, the hope is that more stable conditions will lead to better fishing.

There have also been some pockets of success. A handful of pros are genuinely excited for tournament day and some have found enough fish they want to save them for later rounds. Spencer Shuffield went from a dismal practice to a pretty good one in a few hours on Sunday night.

“The first day, I caught five keepers all day long, daylight to dark,” Shuffield said. “Yesterday, I’d only caught two keepers until about six o’clock and I ended up catching nine more between 6:00 and dark, so I feel like I possibly got on a little something.”

The Mississippi River has a reputation for being a frog haven in the summer and that will play, but there are likely to be a lot of other options on the table. Pros have found some success on topwaters in practice and it seems like the main-river and sand-drop bite for smallmouths has some potential. The more largemouth-focused stuff is also treating some pros well, with jigs, swim jigs, and other usual suspects in play on wood, cut banks, and in the prolific grass.

Which Pool to Watch

With a maximum of 25 pros on the water on any given day of the event, you’d think that just Pool 8 would be more than enough. But, many of the pros have still taken the time to look up and down the river in Pool 7 and Pool 9, with a lot of them planning on heading that way come derby day.

“Last year, I got on them so good in Pool 7, I was getting 30 bites a day, but the lock really hurt me,” Shuffield said. “I only got four hours to fish the first day and the second day I only ended up with four fish. This year, I really wanted to figure out something in Pool 8 because I really didn’t want to deal with that lock. If I did have to deal with it, I wanted to go up there for just a couple hours and have something else to do in Pool 8.”

This time around, Shuffield likes his logistical options a lot more.

“I went into Pool 7 for half a day on day two, and I feel like I can go up there and get a couple decent bites if I need to,” Shuffield said. “And for sure, I know what I can do to come back in here and catch some keepers now.”

“In two days of practice I feel like I should just learn one pool,” said the Minnesota pro. “After last year’s debacle where I fished Pool 7, I figured I should just fish Pool 8 and be done with it. Last year I got back to the check-in boat with 30 seconds to spare on the second day. A barge was in the lock so that probably took five years off my life stressing over that at the time.”

Most of the chatter is about Pool 8 and Pool 7, both are a bit easier logistically and have good fish in them. Still, plenty of pros have explored Pool 9, with Michael Neal, Kyle Hall, Avena, Wesley Strader, Meyer and more all at least sampling what is has to offer. Word is, at least a few of them will be headed back down on derby day.

With practice mostly uninspiring, the weight predictions aren’t robust. But, most agree that the end of the tournament – a full six days from now – is likely to be better than the fishing is now. First on the mind of most is what it will take over two days to make the top 10 in each group move to the Knockout Round.

“Based on what I’ve seen, 10 pounds a day is going to be right around that cut,” Moynagh said. “I think anybody that has 14 pounds, they can lay off their fish and not worry about it. Group B guys will have a better understanding of how the river is playing after seeing the Group A results, that will help them.”

“I think it’s going to be really tough, I think if you catch 10 ½ pounds a day you’re going to be looking really good,” Shuffield said. “I think maybe 9 ½ a day will move on – 11 pounds was really good last year with 200 boats.”

Avena is one of the more optimistic and really figures things will get better.

“I think if you catch a limit each day you’ll advance,” he said. “It’ll take 21 ¼ to make the cut. I think it’ll take 13 pounds to make the top eight in the Knockout Round, and like 16 on the final day to win.”

Hopefully, the fishing is a little better than predicted, but even if the practice blues are true, it’s going to be a good week on the river. With $200,000 on the line and some sterling shallow-water talent in the field, someone is going to figure things out.