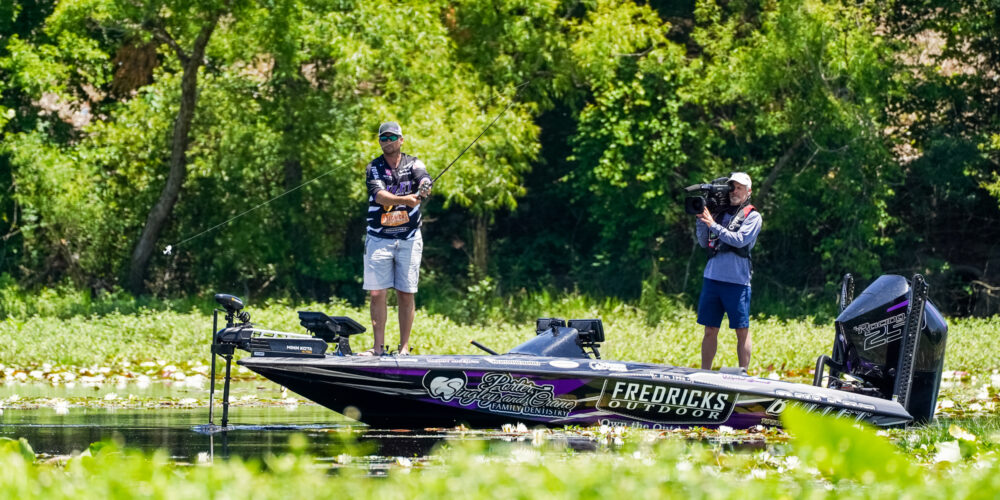 What makes Alabama’s Lake Eufaula such a great tournament lake is there’s just as much great shallow cover as there is great deep cover. Given that, there’s no way to predict which type of fishing will win any tournament held on the lake. This is particularly true in May when some fish are totally done spawning and have moved out while others are still up shallow, guarding fry and filling their bellies with shad from bank-bound shad spawns.

That’s why the Tackle Warehouse Pro Circuit Presented by Bad Boy Mowers event last week was such an interesting tournament. Going into the event, many assumed it would be dominated by a deep bite. As it turned out, the shallow bite was the dominant player this time around. Perhaps a late spring, cooler temperatures and a lot of rain earlier this year played into that. But the fact is, not only did Jason Abram win on the bank, seven others in the Top 10 caught their fish up shallow in some sort of bank grass, shallow wood or hyacinth as well.

Here’s a closer look at how the Top 10 did business on Eufaula in May.

2. Walker Rallies in the River

David Walker climbed the leaderboard every day of the event, putting him in the runner-up spot at the close of business. On Day 3, Walker caught the biggest bass of the event – 8 pounds, 9 ounces – that anchored one of the biggest limits of the week – 20-12.

Walker started his days on a shad spawn, casting a 3/8-ounce Z-Man CrosseyeZ Snakehead swim jig teamed with a Z-Man Turbo CrawZ trailer. In the afternoons, he would fish up the river with his signature series CrosseyeZ Flippin’ Jig in grass and wood. He would also punch mats with a Z-Man Goat under a 1 ½-ounce tungsten weight.

He caught the big bass on Day 3 punching a mat with the Goat.

Amazingly, Trevor Fitzgerald was the only pro in the Top 10 who committed exclusively to an offshore bite. Fitzgerald looked to be the man to beat on Day 3 when he became the tournament leader with one of the event’s biggest catches at 20-12.

Plenty of anglers probed deeper brush for decent catches early in the week, but many of them trampled over top of each other’s piles and fishing pressure took its toll.

Fitzgerald’s offshore strategy was the strongest perhaps due to his intention to steer clear of fishing pressure. Instead of seeking out big piles of brush in heavily fished areas, Fitzgerald wanted to find smaller, more obscure objects off the beaten path. Many of his targets were isolated and dilapidated single tops or old logs. They were about the half the size of his boat and positioned in 10 to 15 feet of water. In all, Fitzgerald had about 20 targets in his rotation.

To dissect the sunken objects, Fitzgerald used a bevy of lures, including his own Fitzgerald Fishing Tungsten Swim Jig in a ½-ounce model teamed with a 4.3-inch Keitech Swing Impact FAT swimbait. He also cranked a Strike King 6XD and worked a Reaction Innovations Machete Worm through the piles as well.

Bobby Lane led the event for the first two days before falling to fourth to lock up yet another Top-10 performance in 2021.

Ryan Davidson climbed the leaderboard all week, finishing the event in fifth place. He sampled a shad spawn in the morning until about 10 a.m., and then went down the lake to fish brushpiles in the afternoon.

He targeted shallow grass beds early with a 3/8-ounce Big Daddy Baits Harry Buzzbait trailed with a Zoom Split Tail trailer. After that he would needle brush piles with a Zoom Ol’ Monster worm and a drop-shot.

“I had one 75-yard stretch of hyacinths with 4 feet of water under them,” Crane recalls. “I would milk that stretch early and then just go junk fishing up the river or in Cowikee Creek the rest of the time.”

Skeet Reese’s red-hot year on the Pro Circuit continued with yet another Top 10 as it didn’t take the veteran pro long to sniff out the shad spawn up the river. His primary shad spawn area featured a deep channel bank that was sweetened with matted vegetation that had drifted into the bank. The depth range under the vegetation was to 2 to 15 feet.

A 3/8-ounce white swim jig teamed with a Berkley PowerBait The Deal trailer did claim a few keepers, but interestingly, Reese did better on the shad spawn by punching into the flotsam.

“I caught some on the swim jig, but mostly they would come up and just nip at it and not get it completely,” Reese details. “But if I punched into the vegetation with a Berkley PowerBait Pit Boss, they would get the bait better and as a result my hook-up ratio was way better.”

Reese topped the Pit Boss with either a ½-ounce or 1 1/2-ounce tungsten weight. He used the ½ on the thinner canopy towards the front of the mat and the heavier one to punch into thicker parts of the compacted mat.

Later in the event, when the shad spawn bite wore thin, Reese retreated out to deeper ledges to drag a 6-inch Berkley PowerBait Straight Money worm on a shaky head to pick up a few more keepers.

Dicky Newberry was the only pro in the Top 10 to utilize Eufaula’s numerous docks as part of his primary pattern. For most of the event, Newberry picked apart docks with a trio of Santone double-willow spinnerbaits, which included a ½-ounce, ¾-ounce and 1-ounce models.

He would use the ½-ounce to attack the actual floats on the docks where shad were spawning early. Then he would pick up the ¾-ounce model to seine any deeper brush down the sides of docks. Lastly, he would roll the big 1-ounce spinnerbait through the deepest brush set out in front of docks.

Newberry’s dock trio worked nicely for three days to get him the Top 10, but on the final day the dock pattern died and he resorted to punching mats with a Strike King Rodent topped either a ½- or ¾-ounce tungsten weight.

His latest came from punching mats of floating debris and hyacinths that had been caught up in current eddies along the river. Floyd’s primary bait for punching was a Strike King Rage Bug, which he topped with a 1-ounce tungsten.

“I only had about 10 spots that were like that,” Floyd says. “I knew it wasn’t enough to last four days. I tried to find something else to go with it, but could never find anything else I felt good about.”

Ramie Colson Jr. had a solid performance by targeting a shad spawn early and then retreating to deeper drops in the afternoon.

His primary shad spawn weapon was a ½-ounce spinnerbait with white double-willow blades and trailed with Zoom Split Tail trailer.

“I would catch five or six keepers off the shad spawn early,” Colson says. “That would die off at about 8:30 and then I would run down the lake and fish hard spots and brush in about 7 to 10 feet of water.”