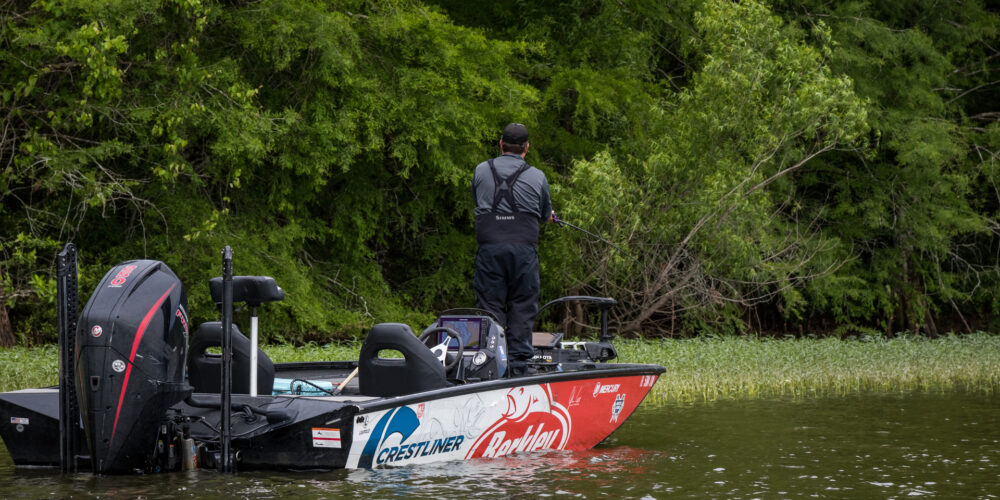 Lake Eufaula is known as the ledge-fishing mecca of the lower Southeast in the summer. The bottom end of the lake is littered with thousands of brush piles. It’s mid-May and the water has been falling every day for the last five days.

A quick look at the Bass Fishing 101 Reference Manual says bass should be retreating from shallow spawning areas and filling the offshore cover. However, after the first day of the Tackle Warehouse Pro Circuit Presented by Bad Boy Mowers event on Lake Eufaula, the anglers combing the lake’s shallow bank cover were the names atop the leaderboard.

Not only did tournament leader Bobby Lane take the top spot with 20 pounds, 8 ounces of bass from knee-deep water, others in the top five found success shallow as well. Here’s a closer look at how the top five fished on Day 1.

Jason Abram found his success on the bank on Thursday, coaxing eight keepers from shallow water.

“I’m covering an extreme amount of water up shallow with a Reaction Innovations bait,” Abrams says. “I’ll fish for miles and suddenly hit a little pod of them and catch two or three. Then I’ll fish another hour and a half without a bite and hit a little bunch of them again.

“I’m looking for something specific in the right kind of areas,” he adds. “When I see it, I’ll spend more time on it. Today, I had one place that looked right. I hit it three times and didn’t catch one until I visited it the third time. It’s not really a shad-spawn type thing because I caught them from these places at all times of the day. This lake is full of shallow-water cover, and coming into this tournament, I committed to fishing as much shallow stuff as I could find.”

John Cox jumped back and forth between the bank and offshore structure to put together a limit weighing 19 pounds, 2 ounces. On the day, he caught about 10 keepers.

Cox had pinned his Day-1 hopes on a Berkley Cane Walker fished in the shallows. The topwater lure produced a solid keeper out of the gate, but then the surface pattern didn’t develop like he’d hoped. From there he caught another decent fish up shallow on a Berkley PowerBait MaxScent General.

“After that second fish, I wasn’t really feeling it shallow,” Cox says. “So I went out and started idling in 12 to 15 feet of water. I saw a fish out on brush, so I started casting a jig around. I caught four or five keepers on the jig and then that bite died.”

Later in the afternoon, Cox returned to the shallows and caught a big bass on The General.

“So yeah, that’s pretty much my pattern,” Cox adds with a laugh. “Just fishing what feels right at the time.”

Evan Barnes capitalized on a shallow bite in the first part of the morning, catching eight keepers on the day. Barnes had planned to fish shallow early and then move out deeper later, but once he caught three big bass early, he decided to stick it out shallow and save the offshore plan for later in the event.

Interestingly, Barnes tried to avoid the exact spots where the shad spawn was most prolific in practice and move to adjacent spots within the same area.

“To me the shad were so thick where the actual shad spawn was happening, I felt like they had a million real shad to eat, why would they bite my lure?” he reasons. “So I started fishing shallow areas near the shad spawn that were not so thick with shad.”

The thing that worries Barnes is that he did not get a bite after 11 o’ clock in the morning.

“Those three big ones early gave me some cushion,” he adds. “So I never had to go out deep. But tomorrow I might check some of my deeper places if that shallow bite is not as good.”

Justin Lucas was the only pro in the top five who caught all his fish offshore. However, that was not the plan to begin with.

“I came here all in on shallow water,” Lucas says. “I didn’t even bring a lot of offshore tackle. I spent the first morning running a lot of shallow stuff with no success. Then, just to be sure, I went and check an offshore brush pile and caught a 5-pounder immediately.”

At that point, Lucas reversed course and went all in on scanning offshore areas to find more piles. He has had to scrape, beg and barrow offshore lures to expedite his offshore game, but it worked. Everything he caught came from offshore.