Product of the Year: Trilene 100% Fluorocarbon 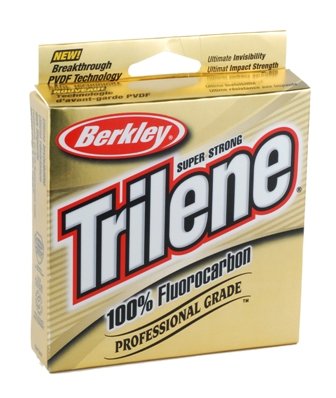 Approximately one decade ago the Yamamoto Senko hit the market and transformed the bass-fishing industry. A few years later the shaky head and finesse worm had a similar effect. In 2005 Bryan Thrift introduced the ChatterBait, and in 2007 Jay Yelas won the FLW Tour Angler of the Year by throwing an under-the-radar swimbait. This season, no singular bait stood out. Instead, a fluorocarbon line was the product with the most profound impact.

It’s no secret that Berkley is a sponsor of FLW Outdoors and has been for some time. But they also sponsor the Bassmaster Elite Series and manage a pro staff that spans both major tournament organizations. The selection of Trilene 100% Fluorocarbon as the Product of the Year has nothing to do with Berkley being a sponsor and everything to do with Trilene Fluorocarbon being an amazing product.

The benefits of fluorocarbon line are many. For starters, it is more invisible in the water due to its molecular structure and minimal light refraction. In theory, the more invisible your line is, the more bites you will receive. Fluorocarbon is also more abrasion resistant than monofilament line. An example of this would be skipping gnarly boat docks and cables. If a big largemouth darts in one direction and the 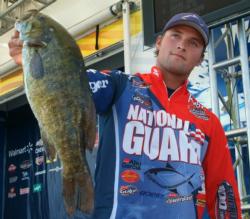 line rubs against a piling, it is game over with monofilament.

Another illustration would be smallmouth fishing on a glacial lake like Champlain. Oftentimes the smallmouths are aggressive on Northern lakes, and anglers routinely sort through dozens of fish per day. You’ve just caught your sixth fish, and your instincts tell you it’s time to retie. Using your thumb and index finger, you stroke the few inches of line just above your knot. Instead of feeling nicks and frays, you feel nothing but smooth line. That’s the very real difference a good fluorocarbon can make.

Fluorocarbon also has better density, which means it sinks naturally with the bait. Mono and braid float, so there is always a slight bend in the line. In addition to the lifelike presentation, the fluorocarbon’s density allows an angler to present baits deeper, a major advantage when throwing jerkbaits and crankbaits.

But the major shortcoming of fluorocarbon is that it is stiffer than mono, which makes it difficult to manage. A few unpleasant examples of this include backlashes, birds’ nests and relentless twisting. In addition, many fluorocarbon lines lack the necessary impact strength to withstand a jolting hook set. There might not be any worse feeling in all of fishing than finally getting that key bite only to have your line immediately snap.

Nearly 10 years ago, Berkley developed a relatively limp, smooth-casting fluorocarbon called Vanish. For anglers that frequently used subtle spinning gear, this was a better alternative than mono. But for die-hard bass anglers that used primarily baitcasting reels for flipping and power fishing, Vanish left a lot to be desired. But in all truthfulness, Vanish was never designed for those applications; it was essentially the XL of fluorocarbon. 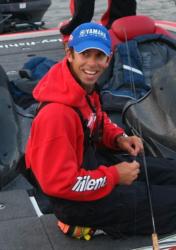 To that end, several big sticks on the Berkley pro staff started to lobby the company to formulate a fluorocarbon that could meet the rigors of big-time bass fishing. The names behind the push include Larry Nixon, Skeet Reese, Boyd Duckett, Michael Iaconelli and Jay Yelas. When anglers of this caliber talk, people listen. This push continued to gain steam and transformed from a polite request to a desperate plea.

“We’ve got a great pro staff that’s really honest with us about our products,” said Clay Norris, senior product manager for Berkley. “If it isn’t working, we want to hear about it. What our pros kept telling us, kept begging us for, was a better fluorocarbon line engineered specifically for bass fishing. They were quite vocal.”

With that “encouragement,” the engineers and scientists at Berkley went back to the lab armed with ample feedback. In the months afterward, over 100 prototypes were produced. After weighing the benefits and limitations of each, that number was trimmed to only a handful – each having slightly different qualities. These “final” prototypes were then distributed to the Berkley pro staff for review.

Each angler gave their feedback individually, but the results were the same. One of the prototypes had the best balance – that model ended up becoming Trilene 100% Fluorocarbon.

“The pros basically picked this product,” added Norris. “We knew that Seaguar made a stiff, abrasion-resistant fluorocarbon line. Vanish was the opposite. This prototype was abrasion-resistant and smooth; we had our competitive set.”

Although the pros were on board, considerable work had to be done until the product could be brought to market. One of those steps was using the line in a tournament where big money was on the line. To 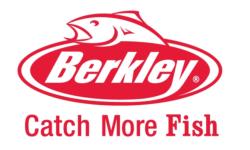 the surprise of Berkley staffers, Duckett and Reese eagerly volunteered to try the prototype at the 2007 Bassmaster Classic on Lay Lake. Incidentally, Duckett and Reese took first and second in the event, claiming $500,000 and $45,000, respectively.

“The fact that those two chose it for the Classic, we knew we had something,” Norris said.

From there, the product first shipped in May 2007, and by June, was in select stores. By January 2008, it was included in catalogs and in mass distribution. Pros began using it in earnest during the 2008 tournament season, but with any new product, it was initially met with skepticism. As the season grew, word spread, and by the time 2009 came around, it was officially the worst-kept secret in the bass-fishing industry.

“It’s been on the market less than two full years, and I suspect it’s already the most used fluoro,” Norris stated. “Our 15-pound-test has won over the baitcasting fishermen, and our 8- and 10-pound-test have won over those that employ spinning gear. In terms of sales, 2009 has been our peak year. In this economy, premium lines are generally down and economy lines are up. The exception is Trilene 100% Fluorocarbon – it continues to grow.

“When we introduced Vanish, we knew we weren’t at the trust level to call it Trilene. To call this product Trilene really demonstrates both our confidence and our pros’ confidence. It wasn’t Trilene Fluorocarbon until the pros said it was.”

Travis Fox just completed his first year on the FLW Tour. As it does for most rookies, it started out rough. But in his last two tournaments, he cashed nice checks and earned his first tour-level top-10 finish. With that added confidence and experience, he is counting the days until the 2010 opener on the Red River.

Fox doesn’t have a line sponsor and thus feels no obligation to use any particular product. Essentially, his opinion carries more credibility than the anglers that are on pro staffs. So when it comes time to spool his reels, what does he choose? 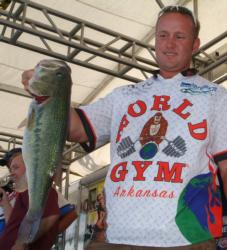 “Berkley Trilene Fluorocarbon is on every single one of my rods except two,” said Fox. “I don’t have it tied on my topwater rod because the line sinks, and I like braid on my spinnerbait rod.”

Fox lives in Lowell, Ark., and frequently fishes the many clear Ozark impoundments nearby. Initially he started using Trilene Fluorocarbon on jigs and finesse presentations.

“Two of my friends and I were fishing a Stren Series tournament last year on Lake of the Ozarks. All three of us got our butts kicked in by our co-anglers – three pros and three co-anglers throwing a brown jig under a boat dock. I mean a brown jig is a brown jig. We all wondered what our co-anglers were doing different? We talked about it, and they were all using Trilene Fluorocarbon.

“That’s where it started it for me. I noticed in one day that it had the perfect balance. It was invisible in the water, it was abrasion-resistant, it had the right amount of stretch, it provided good knot strength, and it was sensitive. It just had every single property I was looking for. When I started fishing fluorocarbon about seven or eight years ago, I went through every brand. At one point, I was convinced Seaguar was the only fluorocarbon line worth a damn. I would like some qualities on one, but not on others. Maybe the sensitivity was good, but the impact strength wasn’t there.”

Needless to say, Fox was hesitant at first to try the new Berkley product. In the past, he’s put a fresh spool of fluorocarbon on a spinning reel only to have 100 feet instantaneously shoot off the bail. Now he uses nothing but 8-pound-test on his spinning reels. But Fox notices Trilene Fluorocarbon excelling the most when he’s cranking.

“I will not throw a crankbait on mono anymore. And that’s because of the sensitivity fluorocarbon provides. You’ve got to feel what is going on down there.”

At the FLW Tour event on Kentucky and Barkley lakes, Fox threw a crankbait on 12-pound Trilene Fluorocarbon. The result was a fifth-place finish and $20,000.

“I was fishing mussel beds, and with the fluorocarbon you could feel the beds. I could tell my co-angler exactly when I was going to get a bite. I would be fishing and going through the sand and the muck, and then you feel the shell bed on the bill of your crankbait. Then I’d tell my co-angler to get ready.”

Moreover, Fox said the fluorocarbon gets his crankbaits deeper.

“It’s just not buoyant like mono. There is a noticeable difference when you’re fishing a deep-diving crankbait, like a DD-22. If I’m fishing a point or a ledge in 15 feet of water, I know I can hit the bottom. And with mono, that bait will only run about 12 feet deep. It gets your bait down deeper, and it gets it down faster.”

Fox’s testimonial is backed by concrete tournament data. Of the six FLW Tour qualifiers in 2009, four were won on Trilene Fluorocarbon as was the Angler of the Year award.

“I can fish whatever brand of line I want,” Fox added. “I’ve actually had line sponsors approach me with deals. But I would rather pay full price for Berkley Trilene Fluorocarbon. I think they hit the nail on the head.”