A durable swimbait that puts fish in the boat 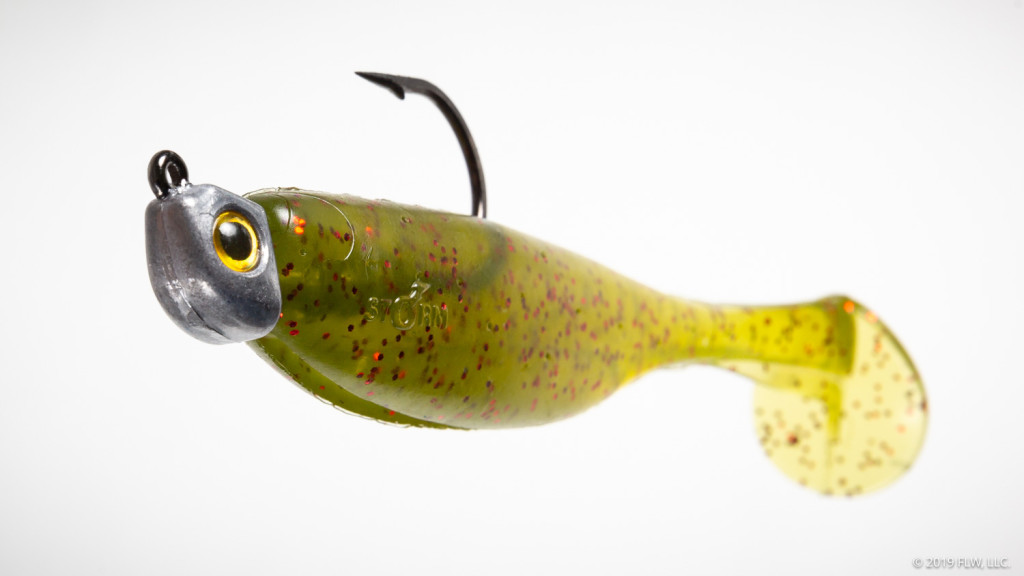 A few years back, Storm launched the 360GT line of swimbaits. The idea was to sell baits with a packaged swimbait head that was designed to fit the 360GT, in turn making it easier for anglers of all skill levels to catch fish by simply taking it right out of the package and tying it on.

While the 360GT Searchbait made some noise in the bass world, the Coastal line offers a swimbait that looks more than juicy for bass of all shapes and sizes. Enter the Largo Shad.

After hearing some rumors about how good the swimbait is – and even some comparisons to Keitechs – I got my hands on a few packs and took them for a test ride. 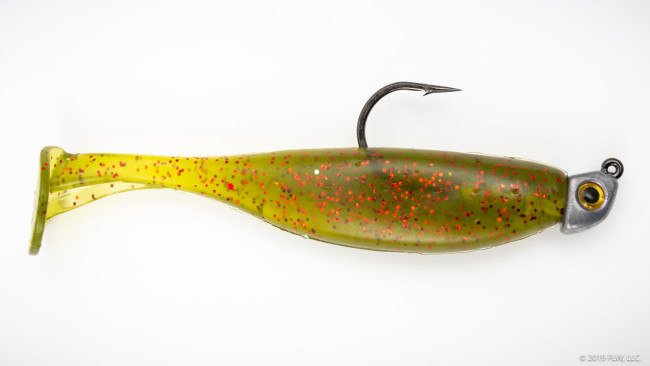 The Largo Shad is available in two sizes – 3 inches and 4 inches – but what’s different about this bait is that it comes packaged with either a swimbait jighead (1/8 ounce on the 3-inch and 1/4 ounce on the 4) or a belly-weighted EWG hook (1/8 ounce on the 3-inch and 3/16 on the 4-inch) and rigged on one of the four baits that come in a pack. For the review, I went with the swimbait jighead option thinking I would make use of them at some other time. While I did fish the head that comes with the Largo Shad, I mostly threw it on an Outkast Tackle Goldeneye Swimbait head or Scottsboro Tackle Recon head, simply because the head that comes with it is fairly light with a beefy hook. I also played with both sizes, but the 4-inch model was in my arsenal the majority of the time.

It’s available in 18 colors, but since the Largo Shad is a part of Storm’s saltwater series (thus the Coastal designation) there are really only about six colors bass fishermen need to worry about. And while six colors may not seem like a huge selection, they have most of the colors you’d want if you’re trying to resemble a bluegill, shad or perch.

At first glance, the Largo Shad doesn’t seem much different than other swimbaits on the market. In your hand, you’ll quickly notice how tough and almost hard the plastic seems, which could give you the impression this swimbait will either need to be reeled fast to get the tail to swim or have little to no action at all – which was the camp I was in. Turns out, it has a seductive, Keitech-esque action with some slight body roll. Basically, it screams fish-catching machine. 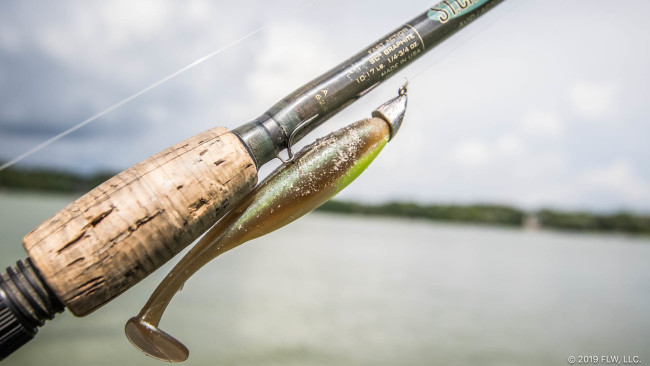 Like I said, the action of this bait is awesome. It’s perfect for slow-winding retrieves, because it barely takes moving the reel handle for the tail to swim. At the same time, you can speed the bait up and not lose the tail shimmy or increase the amount of side-to-side roll, which are both qualities that help in finesse situations, cooler water or when dealing with pressured fish.

Since this bait is only offered in 3- and 4-inch models, I’d categorize it as a finesse swimbait, much like a Keitech Swing Impact FAT or Megabass Spark Shad – two of my favorite baits for smallmouths any time of the year or fishing for offshore largemouths up north. The problem with those swimbaits is that after catching a fish or two, they tend to get shredded to the point where you need to replace them or they fly off your swimbait head after a smallmouth jump or two. The Largo Shad, on the other hand, is by far the toughest swimbait I’ve used. It has a very similar action to the Keitech or Megabass, but can withstand the abuse of multiple fish. In some instances, I caught upwards of a dozen fish before I even thought about putting a new Largo Shad on. Heck, even a norther angler’s nemesis, the pike, could chew on one without causing much harm. 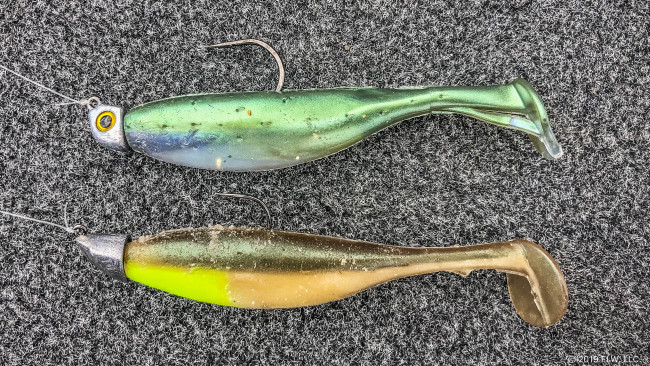 One thing I found out while fishing the bait is that is has pretty good action on its own, but if you look at the tail, you’ll see where the body of the swimbait connects to the boot. Underneath, there’s a smaller piece of plastic also connecting to the tail. If you remove that smaller piece of the plastic, you get even more tail thump without causing the bait to roll side to side any more than it normally does. This is almost exclusively how I fished the bait. 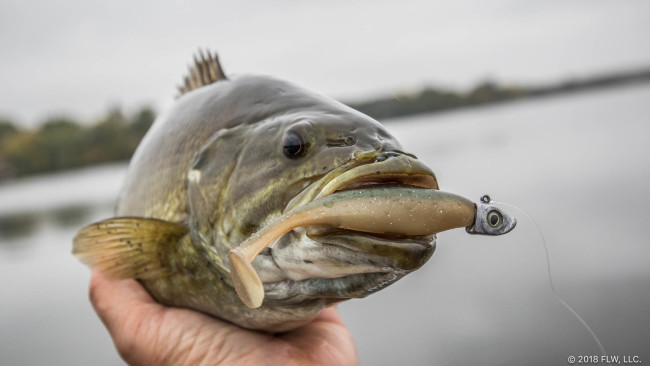 I fished this bait for smallmouth a lot last fall and found that I rarely rigged up a Keitech, not because it catches them better than a Keitech, but the durability alone was more than enough to convince me to keep it tied on. With cold hands, not having to worry about threading a new swimbait after every couple fish was a lifesaver. Plus, with lots of perch and small walleyes that like to nip the tails off your swimbait, the Largo Shad could withstand getting pecked at cast after cast and kept the tail in great shape.

This summer, I’ve been playing with this bait for largemouths quite a lot, rigged on the Recon head. I’m amazed at how well they eat it. I’ve actually had several times where they eat the Largo Shad better than a regular paddletail swimbait – like a Basstrix, Zoom Swimmer or Strike King Shadalicious – which I chalk up to the more subtle action. But still, it puts fish in the boat, and I can’t argue with that. And again, the fact I can make repeated casts to a school once I get them fired up and not have to worry about putting a new bait on every other fish is amazing. 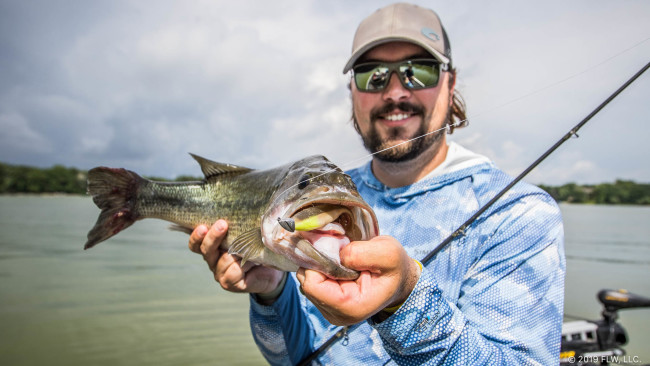 I fished the Largo Shad almost exclusively on a swimbait jighead, though that’s not to say it doesn’t work well as a trailer either. I fished it on a swim jig and vibrating jig some, but I found I liked it most straight up.

With four baits per pack and a $5 price tag, they are about on par with a pack of Keitechs for price per bait. The bonus, I suppose, is that you get a swimbait head or EWG hook with the Largo Shads, and though they work just fine with the bait, I put my heads that came with the Largo Shads to use on an umbrella rig more than I did solo.

Overall, I wish you could get more baits per pack, though the fact they are so durable makes it not as big of an issue. And while it still may be an under-the-radar bait, the Largo Shad combines a durable bait with a seductive action that makes it a swimbait you should absolutely give a chance. Or at least pick some up before they catch on among your buddies.