An innovative tail spinner solves some problems of the genre 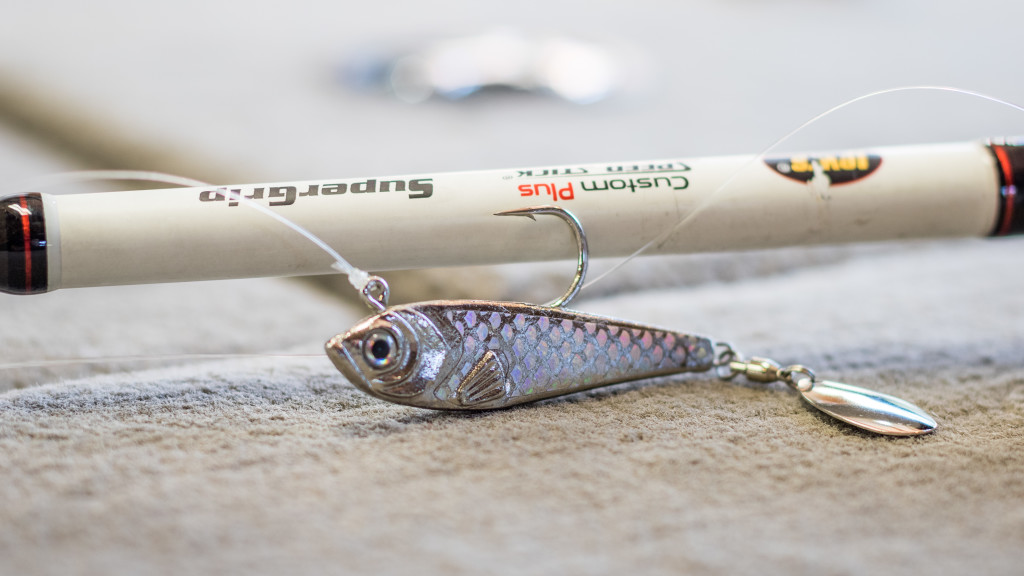 The Blade Runner Turbo Tail is a very cool variation on the standard tail spinner. Instead of the standard shorter body with a treble hook, the Turbo Tail is elongated and sports a single hook. I’ve fished it a few times now and caught fish with it, and I’m looking forward to modifying it some in the future and catching even more. 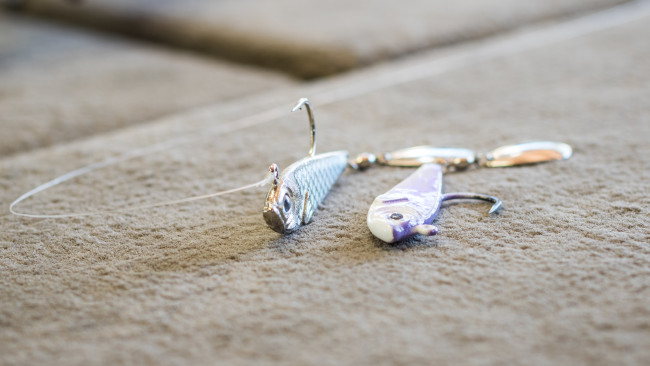 The basics of the bait

Built in a standard teardrop/spoon shape that looks like a jigging spoon flipped on its edge, the Turbo Tail has a single hook in the back and a blade on the rear end. It rings in at 3/4 ounce, with a 2 1/2-inch-long body. With the blade and all, the whole package is about 4 inches long.

The hook is pretty heavy duty, and I don’t think you’ll be able to damage or bend it on 12- or 15-pound test. The paint jobs and holographic scales on the bait are nice as well, though perhaps a little overkill compared to a standard blade bait or jigging spoon.

When you fish it, the blade makes for a slower fall than a comparable jigging spoon, and you can feel it spinning when you sweep it up. Still, being so heavy, it falls well and is plenty efficient for getting to the bottom or getting to fish quickly. I could easily feel the motion of the bait at the bottom on a short cast when fishing it in 40 feet of water on fluorocarbon. 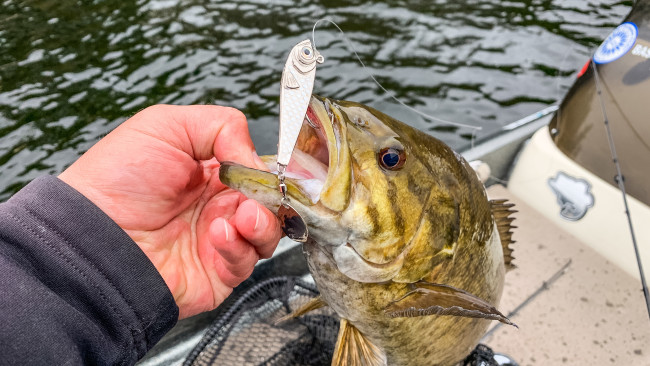 The thing that first intrigued me about the Turbo Tail is the top hook. Tail spinners and blade baits are notorious for losing fish if you aren’t using the right tackle and approach. Moreover, I’ve found that blade baits and tail spinners can also have a tendency to snag on your line more than is convenient, especially if you add a split ring on the hook hanger to change the hardware. The Turbo Tail hasn’t snagged on my line yet, which I consider a perfect success, and I also haven’t lost a fish on it. I’m not sure that the perfect record will extend into warmer times of year and feistier bass, but it’s a very good start.

The other reason the top hook intrigued me is because I thought it might make the bait a little more snagless on the rocky bottom that smallmouths so frequently hang around. So far it’s also been successful on that front. I snagged the bait a couple of times on one spot, but I’ve been able to get it back every time. Dropping it around big boulders in 25 feet of water hasn’t been an issue at all. However, I suspect that when you do hang it up it’s going to really be hung. That top hook isn’t going to bend out like a smaller treble might. 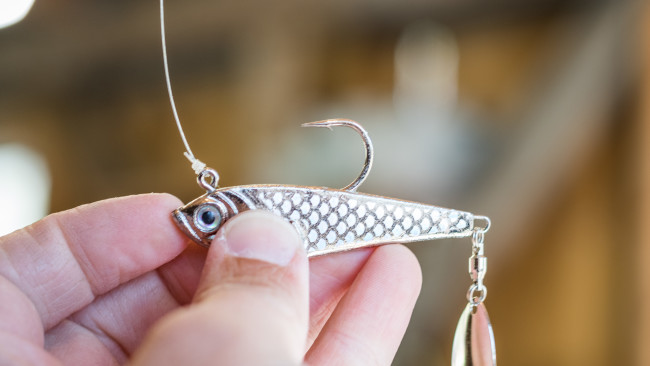 Dreaming on the potential

I’m already a fan of the Turbo Tail, but there are also a few other things I’d like to try. One would be to add a bladed treble to the back instead of the standard Indiana blade. It’d be a bit of an imitation of the Damiki Axe Blade, but I think one of the bladed trebles from VMC or Decoy could make for a really interesting modification.

Another thing I’d like to see is a smaller size. Maybe not lighter, but I think a tungsten version or perhaps a 5/8- or 1/2-ounce model with a smaller willow blade would be amazing. Using forward-looking sonar, I’ve seen a few smallmouths mess around with the Turbo Tail but not bite, only to be caught on a smaller-profile drop-bait shortly thereafter. 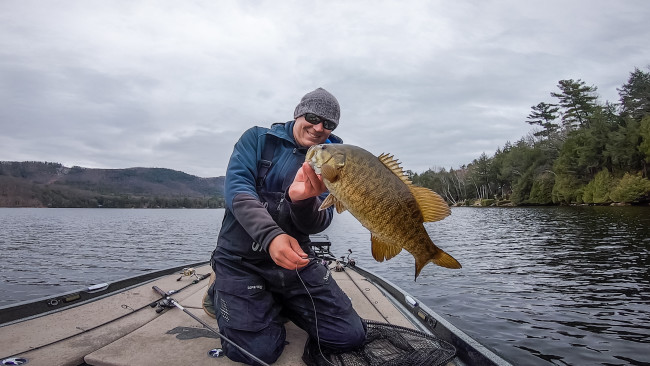 I think the Blade Runner Turbo Tail is a winner. I haven’t done everything with it yet (I still need to do some summertime work with it), but I think the bait is unique and therefore worth a spot in a lot of tackle boxes. At $5.99, it’s not too pricey, and the only color that’s missing is gold. Also, it definitely catches bass, and that’s about all I need out of a bait.