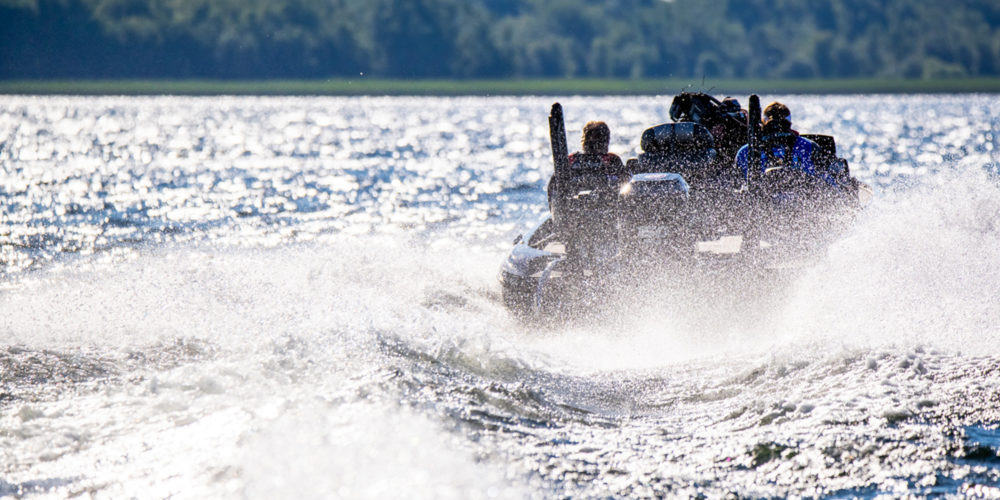 The Challenge Select Championship airs Saturday, May 4 from 2-4 p.m. on the Outdoor Channel.

COLCHESTER, Vt. – From the moment the final six anglers showed up at the Kelly Bay Ramp on the northwest arm of Lake Champlain for the Championship Round of the Major League Fishing Challenge Select, it was clear everyone’s intentions were the same.

In fact, in the history of MLF, never have so many pros had the exact same fishing game plan before the boats were even launched. For each of the six finalists, it only took one look at the zone map to know precisely what they were going to do.

“Looks like I’ll be running straight down there and trying to claim a corner of the cut-through with everyone else,” said Mark Rose candidly. “I hate it’s got to be that way, but that’s going to be the deal and everyone knows it.”

Wesley Strader was also immediately dialed in on what was fixing to happen.

“Get ready, because you’re about to see a six-man boat race 10 miles down the lake to claim just two spots,” Strader said. “No one will even use the ride through period to look around. We’re all going to race straight there and try to claim first dibs.”

From wily veterans like Rose and Strader to savvy young guns like Jordan Lee, everyone knew the gig.

“Yeah, I’ve got a bad feeling about how this is going to go down,” Lee said cautiously. “I haven’t even talked to anyone else in the finals yet and I can already tell you what’s going to happen: everyone is going to race down there to those cuts. No one is going to use their ride through to look around; we’ve all fished up here before. We know what’s what. We don’t even need the ride through period.”

Brandon Coulter was also grimacing at the prospects of the day.

“Have you ever seen a free-for-all on one spot in MLF?” he questioned. “Well, one is about to go down and it might not be pretty.”

Within minutes, a sort of somberness had settled over the boat ramp. The normal amount of light-hearted smack talk that usually occurs between pros had been squelched by a rather awkward silence – and everyone was aware of the elephant on the lake, so to speak.

Despite having nearly 24,000 acres to fish on Lake Champlain’s western side, including such fabled places as the Rouses Point, the Windmill Flat, the Trestle, Kelly Bay, Chazy, Monty Bay, Point Au Roche and Isle La Motte, the only thing these six pros were focused on for the Championship Round was one of the most historic fishing locations in all of tournament bass fishing: the cut-through in the railway line into Cary Bay leading up the Alburgh Passage.

Everyone in the top six knew the coveted cut-through to Cary Bay was a sure path to an MLF Select victory given the amount of bass that were caught off a similar spot in Malletts Bay during the Sudden Death Round.

“You have two choices today,” said JT Kenney. “You can either race down there and throw your elbows out to get a corner of that riprap or go to some other part of the zone and listen to SCORETRACKER light up without your name being mentioned. I think we all played fairly nice together given the situation in Malletts. But today is different.”

“I played the nice guy in Malletts Bay,” Strader said. “I let other guys have those blow-through corners in Malletts and I went and fished grass to make the Championship. But today, there will be no more Mr. Nice Guy. I’m going to get in there and get my share and I won’t make any apologies for it.”

Even as the boats were being launched, the tension got thicker as anglers began to jockey for position for blast-off for the ride through. After all, even getting a boat-length head start on the ride through could mean the difference between getting a coveted pole position spot on a cut-through corner – or not.

Never in MLF history have pros discussed the takeoff order of the ride-through period.

Then something rather remarkable happened. Once all the boats were in the water, Strader summoned the other five boats to gather up around him and Power-Pole down for a homegrown proposition about the obvious situation.

“Look, we all know what’s fixing to happen here,” Strader said aloud. “We all know what happened in Sudden Death in Malletts. Six guys are going race to one spot during the ride through, try to stake their claim and wait for lines in. And we all know that’s not what this format is supposed to be about. So I propose that we all agree – among ourselves – to make those two cut-throughs into Cary Bay off limits.”

Strader went on to make it clear that if all did not agree to the newly composed gentlemen’s agreement, then it was off the table. Either everyone agreed to it unanimously or it would be a free for all.

Given the nature of pro fishing, the odds of getting just two competitors to agree to something can be a challenge, much less six fierce competitors.

For the next few minutes, the anglers discussed the situation intensely. Some wanted more clarification of just how close one could get to the cut-throughs. It was then decided that all of the riprap along the old railroad line was off limits and the no wake buoys leading up to the cut-throughs would define the off-limits of how close an angler could cast to the cut through.

With just minutes remaining before the blastoff for the ride through period, the motion was verbally agreed on by all anglers, without ever making it a formal rule through a tournament director or commissioner – a true first the sport of professional bass fishing.

Now all that remained was to see if everyone would honor the historic gentlemen’s agreement among anglers in the Championship Round.