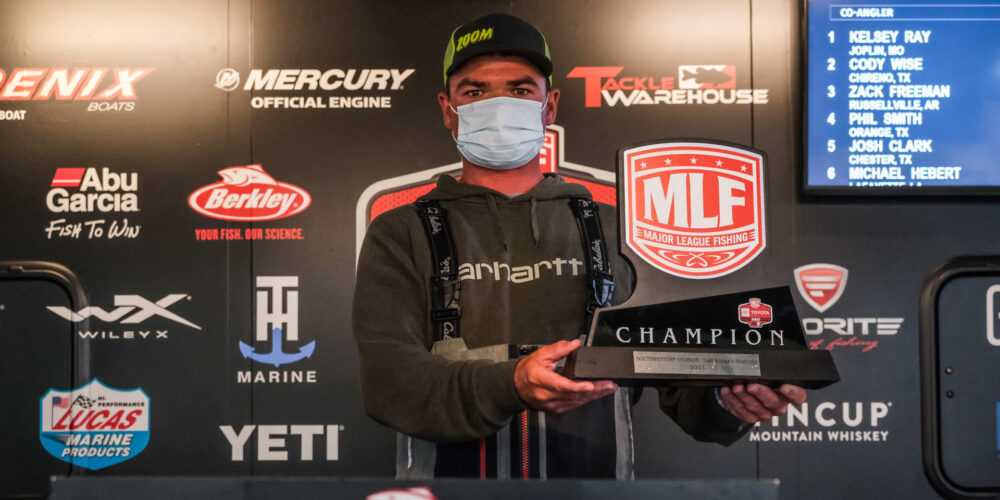 Derek Mundy has been firing on all cylinders since the calendar rolled over to 2021. He started the year off by crushing 40 pounds, 10 ounces (with an 11-10 kicker) to win a Phoenix Bass Fishing League presented by T-H Marine event on Sam Rayburn just a few weeks ago. So, it’s only fitting that he would end the month in the same fashion.

Mundy nearly hit the 40-pound mark yet again this week en route to his first Toyota Series presented by A.R.E. win of his career. Weighing 12-13 on day one of the event – which was presented by Berkley – Mundy dropped 39-7 on the scale Friday to easily climb from a tie at 59th to first. That bag included a massive 13-10 kicker that gave him more than a 12-pound cushion over second-place heading into the final round. Today, things were slow for Mundy, but with a small limit and time running out he landed a 10-pounder to more than seal the deal.

So, if January wasn’t Mundy’s favorite month before, it certainly has to be now.

“January used to be the month I always hated,” Mundy jokes. “I did. With a passion. But starting last year I started getting in the groove of things and studied some things and my fishing partner and I come up with some things and stuff to try and it’s worked out.”

Doing his homework has paid off, but it’s still hard to beat good ol’ time on the water.

“Oh, golly, it’s a bunch of time spent on the lake,” Mundy says of dialing-in late-winter bass. “I can’t tell you how many hours I’ve spent on the water this January, but it’s a bunch. That’s probably a better question for my wife.”

Swinging for the fence may be an overused term in the bass fishing world, but it certainly fits for Mundy. While many anglers in the field this week were drawn to the drains and lush hydrilla found throughout the lake, Mundy knew he had to keep some offshore stuff honest, especially after his first day didn’t pan out how he hoped.

The Broaddus, Texas pro did spend some time fishing grass and caught fishing from it during the tournament, but all of his big fish came offshore.

“I was throwing [a lipless crankbait] in grass to try and bail me out when I couldn’t catch them offshore,” Mundy says. “They like a red ‘trap on Rayburn and you can catch a big bag doing it.

“But all of my big fish came from hard spots in little transition areas,” he says. “I fished probably five or six throughout the week. Sometimes I’d rotate through the same ones trying to catch them when they’d set up right. When we get them old hard winds like we had today they don’t set up right. They’ll get up off the bottom and they like to roam around and chase them gizzard shad.”

Today, Mundy spent a few hours offshore early to try and capitalize on a good morning bite, but abandoned it to fish grass to try to get a limit. With a very small limit in the boat, he ran back to his starting spot to finish the day and finally connected with the key bite he was hoping for.

“I sat there and drug a Carolina rig around when I went back. Getting towards the end, I thought I needed to pull something out of the hat,” Mundy says. “So, I picked up my No. 1 confidence bait for this time of year and that 10-pounder bit on my last cast.”

That confidence bait is a Strike King 8XD. He builds his own rods and opts for Lew’s Super Duty Wide Speed Spool reels for his big crankbaits. As far as line goes, he throws anything from 15- to 20-pound-test fluorocarbon depending on what depth he’s trying to target.

Fishing the tournament out of a borrowed boat due to a blown motor on his, Mundy was hoping to make a little money to be able to pay for the engine. With over $50,000 in winnings this month, that shouldn’t be much of an issue.

“That ought to get me [a motor] and a still have little money to play with anyway,” he laughs. “This is amazing. It really is.”