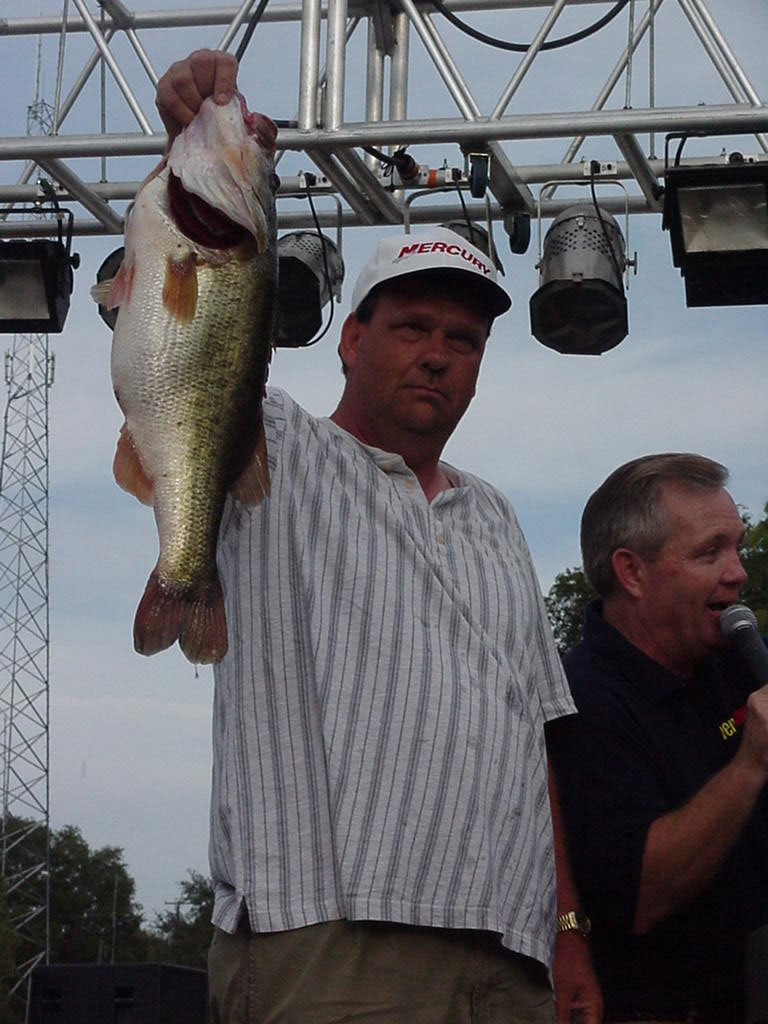 Pro Eddie Hall of Porum, Okla., holds up a gigantic 9-pound, 12-ounce bass during Thursday's weigh-in. The fish earned Hall a berth in the top 10 and a $750 check for the biggest catch of the day. Photo by Gary Mortenson. Angler: Eddie Hall.
November 9, 2000 • Jeff Schroeder • Toyota Series

Holy mackera…uh, bass … Until today, the Winter Haven Chain of Lakes has been reluctant to share its storied big Florida bass with Operation Bass anglers and fans (including last year’s Ranger Millennium M1 tournament). But several competitors came up big today, and I mean huge. First, in the Pro Division, Leo Osborne of Oklahoma City set the pace for Big Bass with a whopping 7-pound, 1-ounce bass. Then Chip Harrison of Bremen, Ind., came across with not one, but two fish over 7 pounds – a 7-pound, 13-ounce whale we’ll call Moby Dick and his little brother, a 7-pound 12-ounce monster we’ll call Jaws – sending him into third place with the day’s highest total weight of 19-0. Then it was – guess who – Cypress Gardens guru Darrel Robertson of Jay, Okla., who set down an 8-pound, 7-ounce behemoth that left everybody wondering what this guy eats for breakfast (more on Superman later). In the end, it was Eddie Hall of Porum, Okla., who would go home with the sorest forearms from lifting weight. He astonished the crowd and his competition when he pulled a 9-pound, 12-ounce freak of nature out of his sack. Not only the Big Bass of the day, it was the biggest bass caught in EverStart competition this year. And it bumped Hall, who was sitting in a paltry 91st place after day one, up to seventh place and into the semifinal round. And let’s not forget, he only weighed in three fish today. Said the excited pro, “It’s the biggest bass I’ve ever caught.” … Not to be outdone, co-angler Russ Lauffer of Littleton, Mass., landed a 7-pound, 15-ounce whale, winning the Big Bass competition, a handy six hundred bucks, sixth place and a trip into the next round. Whew.

Skip to my Lulu … So where did all these big fish come from? Two funny little words: Lake Lulu. That’s where Harrison caught his two monsters and that’s where Robertson keeps returning to the well. While some anglers professed that much of the structure in the crowded Chain of Lakes had been picked nearly clean by yesterday’s competition, for some reason little Lulu – just off the northwest corner of Lake Eloise and just south of downtown Winter Haven – produced big today. And that’s baffling some anglers because this year Lulu contains less hydrilla than they saw at last year’s M1 tournament. But that’s fishing for you.

About that Superman … Whatever Robertson knows about fishing the Chain of Lakes, he knows it well. His secret spot, allegedly somewhere on Lake Lulu, has yet to fail him at Cypress Gardens. He caught three of his fish by 1 p.m. today and then left it alone, but not before landing the impressive 81/2-pounder. While he was giddy about gaining the lead, the big one left him scratching his head a bit. “I got one that I’d like have on Saturday,” he said. “I didn’t think it was going to get into the net.”

Unlucky 14: The place of pro Sterling Williams of Pine Bluff, Ark., after the opening round. The reason: His two-day weight total was 14 pounds, 14 ounces. The Pro Division cut: 15-14.

“This thing is going to be closer than the presidential election.”
– Operation Bass host Charlie Evans on the tight race to make the pro cut.

“I never said that. No, I love this lake.”
– Pro Taylor Hutchings of Phoenix, responding when Evans pointed out Hutchings’ assertion on the first day that he was having trouble and didn’t particularly like fishing the Chain of Lakes. Hutchings came in with the second largest weight on day two, 17-10, and sits in second place.

“Very nervously.”
– Co-angler Kay Barton of Tuskahoma, Okla., on how she landed a whopping 5-pound, 11-ounce fish today as she was paired with Robertson. The fish gave her a two-day total of 11-10 and sent her, in eighth place, as the only female angler into the semifinal round.