Robertson sneaks into the finals 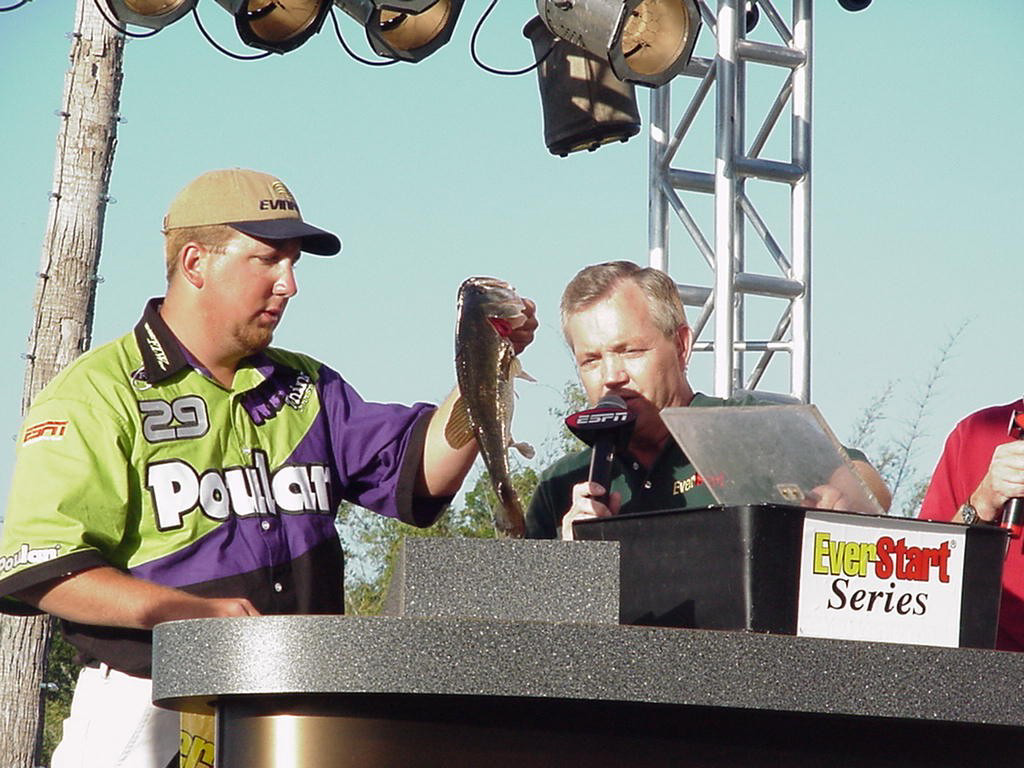 Pro leader after the semifinal round Al Gagliarducci of Agawam, Mass., weighs one of his big fish that added to his total of 10 pounds for the day. Photo by Jeff Schroeder. Angler: Al Gagliarducci.
November 10, 2000 • Gary Mortenson • Toyota Series

In the Pro Division, Al Gagliarducci of Agawam, Mass., recorded a catch of 10 pounds to finish on top of the leader board after the third day of competition. Gagliarducci, a 25-year-old rookie on the EverStart Series, said his goal is to fish one day at a time.

Gagliarducci said he lost a big fish during Friday’s competition.

“I thought that might hurt me, but now I’m glad I lost it,” he said. “Maybe I can catch it again tomorrow.”

Chip Harrison of Bremen, Ind., finished in second place with a catch of 6 pounds, 7 ounces. While he said he fished well, he acknowledged that he took some fishing lessons today from his partner, co-angler champion Wesley Burnett.

“I got a real good schooling today in bass fishing from my partner,” Harrison said. “But I made the top five and that’s the most important thing. Tomorrow, I’m going for broke.”

Jim Short of Ocean Pines, Md., recorded a catch of 6 pounds, 1 ounce – a result that was good enough for third place.

“I’ve practiced really hard for this tournament and I fished about as hard as I could today,” he said. “Somebody just caught all of my fish. But the most important thing is that I made it to the finals.”

Alister Johnson of Cottondale, Fla., finished in fourth place with a catch of 6 pounds.

“There’s some really big fish out there,” he said. “I think I’ll be in good shape tomorrow.”

Day two leader Darrel Robertson of Jay, Okla., squeaked into fifth place with catch of 5 pounds, 11 ounces. However, it wasn’t easy. Needing only 5 pounds, 8 ounces to make the finals, Robertson initially recorded a catch of 6 pounds, 3 ounces. But because one of his fish died before the weigh-in, Robertson was charged an 8-ounce penalty. In the end, Robertson outdistanced sixth-place finisher Mike Gough of Gainesville, Fla., by a mere four ounces.

Robertson acknowledged that he was breathing a sigh of relief.

“I don’t think I fished very well today,” he said. “So I’m obviously tickled to death to be here.”

Guests who attend tomorrow’s 2 p.m. championship weigh-in at Cypress Gardens will be rewarded with some great fish stories as well as some fantastic country music. The Charlie Daniels Band is scheduled to play two sets at 1 p.m. and 3 p.m.

Morning takeoff, which will be covered by ESPN, will take place at the Cypress Gardens launch site at 7 a.m.