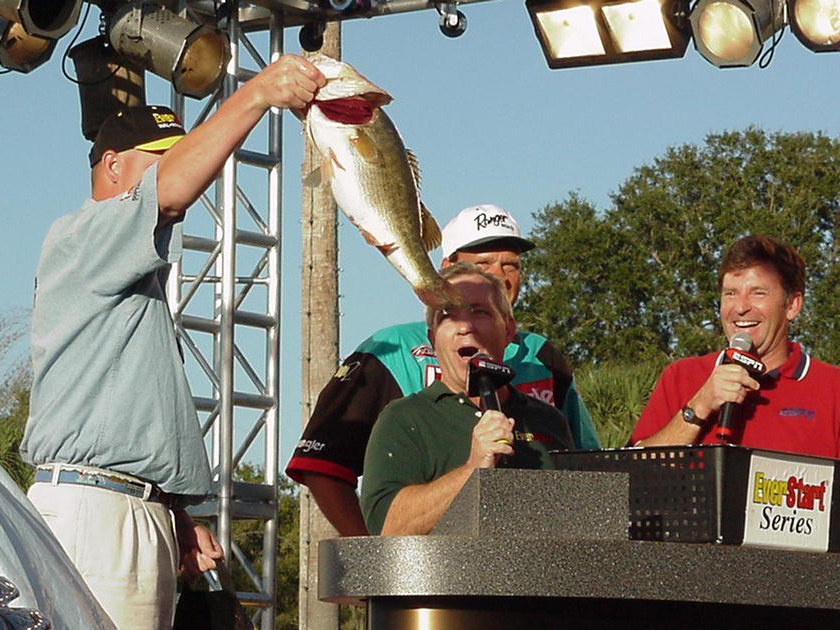 Ab-solutely huge … While Chris Abney of Mt. Sterling, Ky., only landed two keepers today, he still vied for the Challenge title in the Co-Angler Division, losing only to Wesley Burnett of Hot Springs, Ark., near the end of the weigh-in. How did he capture second place with only two fish? One of the fish in his 11-pound, 10-ounce stringer weighed a massive 7 pounds, 10 ounces. Easily the biggest bass of the day, Abney fished with pro Eddie Hall of Porum, Okla., and caught it in almost exactly the same place Hall caught his tournament-heaviest 9-pound, 12-ounce bass yesterday. Look out for this kid, Abney. At 26, he has only fished in two prior EverStart tourneys, and he placed in the top 10 in both.

Burnett on fire … Burnett was breathless when he caught his biggest bass of the day – and rightfully so. “That sucker’s as long as my arm!” he shouted for the camera. The fish helped him reach a total weight of 16 pounds today, making his the heaviest catch in both divisions. Said the co-angler champ, “All I can say is God loves me and he blessed my socks off today.” His pro partner for the day, Chip Harrison of Bremen, Ind., who caught a total of 6 pounds, 7 ounces and still landed in second place going into the final round, put it another way. “I got a real good schooling in bass fishing today,” he said of his day on the water with Burnett. Nothing to be ashamed of, Chip. While only his first year on the tour, Burnett has already notched a win, on Sam Rayburn Reservoir, Texas, in March.

Yankees dominate … No, not the World Series. The top three pro finishers in the semifinal round all hail from regions above the Mason-Dixon line. Pro leader Al Gagliarducci hails from Agawam, Mass., second-place Harrison makes his home in Bremen, Ind., and third-place Jim Short is from Ocean Pines, Md. Also, yesterday’s Co-Angler Division Big Bass winner and today’s sixth-place finisher Russ Lauffer is from Littleton, Mass. With bass like they have here in Florida, I wouldn’t be surprised to see Santa Claus himself fishing a tourney down here.

Robertson squeaks one out … All eyes were on pro Darrel Robertson of Jay, Okla., as he sheepishly brought his sack to the scale today. The Ranger Millennium M1 champ had to beat Mike Gough’s weight of 5-7 to make the final-round cut and continue his run as the Cypress Gardens guru. He knew it was going to be close, especially since he had an 8-ounce penalty coming for a deceased fish. He placed his fish on the scale. Operation Bass host Charlie Evans announced, “6 pounds, (pause) 3 ounces!” Another quick pause to do the math, and Robertson began pumping his arms. His 5-pound, 11-ounce catch of the day might not have been the most impressive, but it was easily the most dramatic.

“You’re fishing on your honeymoon. Life doesn’t get any better than that.”
– Evans, to newlywed co-angler Lauffer.

“I know it. C’mon (pause). Whew. Let’s go. I might pass out.”
– Early co-angler leader Abney, to Evans, while waiting anxiously onstage as co-angler after co-angler weighed his fish.