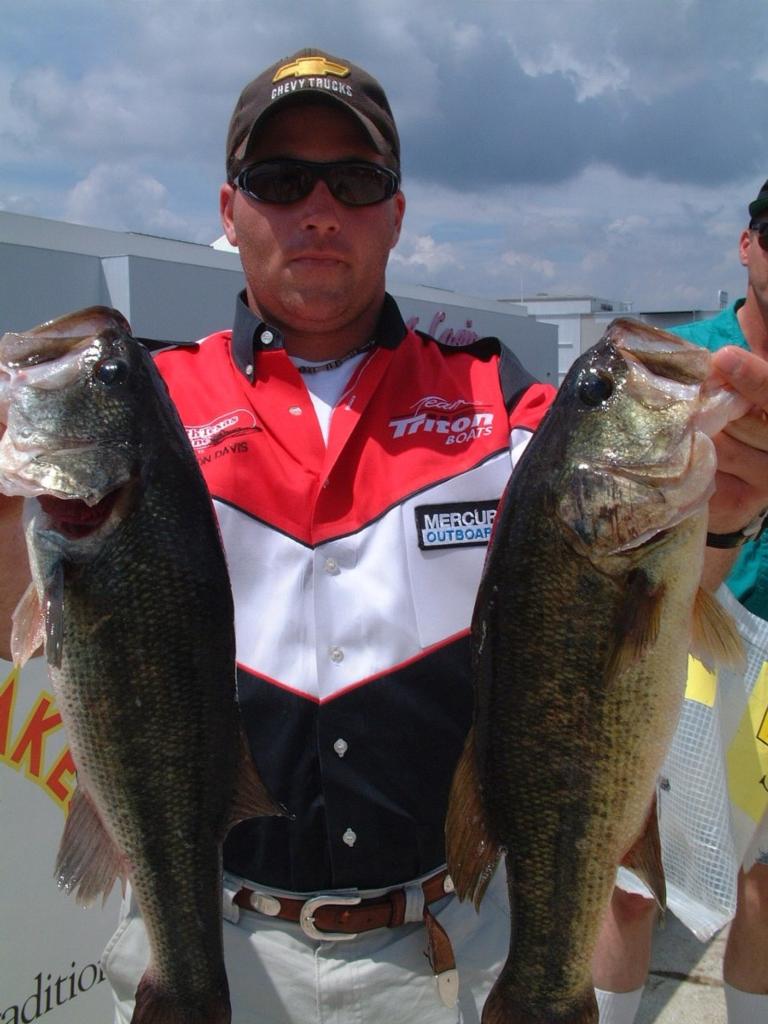 GREENVILLE, Miss. – Harmon Davis of Marlow, Okla., used a 13-pound, 11-ounce catch to grab the lead in the Pro Division heading into tomorrow’s all-important final day of EverStart Central Division competition on Lake Ferguson. Davis, who was in 10th place at the end of yesterday’s action, said he is thankful to have gotten this far.

So far, Davis has relied on an amazingly small area to reap his bounty.

“I’ve basically caught all of my fish fishing off three different trees. I’m not fishing a big area at all,” Davis said. “This whole tournament I’ve just been cruising up and down, back and forth, making a circle past those trees. It’s kind of crazy if you think about it. And it’s really hard sitting in the same spot day after day. But so far, it’s working.”

Not surprisingly, Davis said his fate in tomorrow’s competition will be determined by the productivity of his tiny area of tree cover.

“For me to win tomorrow, that spot is going to have to hold up one more day,” he said.

Sam Newby of Pocola, Okla., was in fourth place after netting a catch weighing 10 pounds, 3 ounces. Raymond Thomas of Checotah, Okla., grabbed the fifth spot with a total catch of 9 pounds, 13 ounces.

Charlie Carlile of Tulsa, Okla., finished in first place in the Co-Angler Division after landing a total catch of 10 pounds, 14 ounces. Carlile, who was in fifth place after yesterday’s competition, said he couldn’t be more happy with his performance.

“I’m very pleased. I’m elated,” said Carlile. “There’s nothing to be ashamed of when you make the top 10. It’s hard to get out of a pack of 150 anglers in a tournament like this.”

Carlile, who has been fishing a black-and-blue jig almost exclusively throughout the tournament, said he has no plans on changing his strategy come tomorrow’s competition.

“I’m going to be doing the same thing on Saturday,” he said. “Hopefully I can carry over my past success to tomorrow.”

Gary Clark of Sheridan, Ark., who was in 29th place after yesterday’s competition, made a dramatic move up the standings, grabbing second place with a catch of 9 pounds, 2 ounces. Guy Lindstrom of Horseshoe Bend, Ark., took the third spot with a catch of 8 pounds, 10 ounces.

Don Smith of Belton, Ky., finished in fourth place with a catch of 5 pounds, 15 ounces. Chuck Lawless of Park Hill, Okla., registered a fifth-place finish with a total catch of 4 pounds, 8 ounces.

Once again, all anglers will start from zero tomorrow, as the combined weights do not carry over into the semifinals or finals. Saturday’s competition will resume at 6 a.m. at the Washington Street Boat Ramp, located off Main Street in downtown Greenville, Miss.