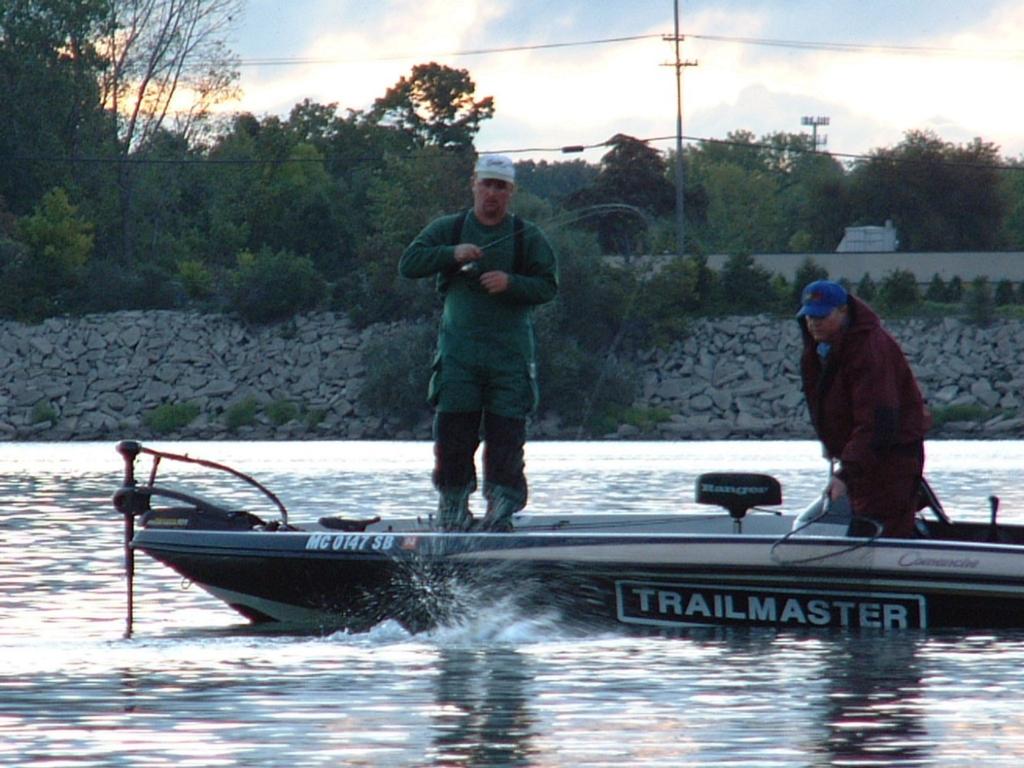 DETROIT – The drought of full five-fish stringers that beleaguered competitors on Wednesday became a distant memory Friday at the EverStart Series Northern Division tournament here at Lake Erie. While EverStart Pro Division veteran Koby Kreiger dominated the cold-weather opening round, it was local pro Barry Bucciarelli who got hot in today’s warmer temperatures and caught 20 pounds, 6 ounces of smallmouth bass to take over the lead heading into Saturday’s final round.

As the sun came out and warmed everything up in the Detroit area, so did the fishing. For the first time all week, all of the top 10 pros weighed in full five-fish stringers.

Bucciarelli, a contractor from the Detroit suburb of Romulus who is fishing in his first EverStart event, used his intimate knowledge of the Lake Erie fishery to gain an edge today and land five bigger bass. While he wouldn’t divulge the exact location of his profitable fishing spot on the lake, he admitted that it was the same location that led Jon Jezierski of Troy, Mich., to his hefty 23-pound catch weight yesterday.

“I fish here five days a week,” he explained. “I found that spot in the spring and I figured it would hold fish in the fall. I had a good idea that (Jezierski’s) big bag came from there.”

Fishing in four to 20 feet of water, Bucciarelli used spinnerbaits and tube baits to target larger bass. He had his five-fish limit in the livewell by 8 a.m.

“I don’t think (the fish) are moving right now,” he said. “Whenever they feel like eating, they come up and get the bait. The smallies in the fall are just wanting to eat, so they’re fairly easy to catch. You’ve just got to find them. It’s not rocket science.”

Not coincidentally, Jezierski finished in second place today, exactly one pound behind Bucciarelli, with five fish weighing 19 pounds, 6 ounces. Jezierski, who admitted that he found the fruitful fishing location while scrambling for fish yesterday, went right back to it today and shared the spot with the Bucciarelli.

But Bucciarelli insisted there was plenty of room for both of them. “Neither one of us is fishing each other’s water,” he said. “I’m confident there’s enough fish for both of us.”

If not, the local said he knows alternate locations. But his main concern isn’t his fish drying up; it’s the competition he will face tomorrow. Lima, Ohio’s Steve Clapper qualified in fifth place with a five-fish weight of 18 pounds, 13 ounces. While Clapper said he struggled a bit today, Bucciarelli’s not taking his eye off the dangerous Ohio pro who finished third at EverStart Sandusky Bay last month.

“Clapper’s my big concern,” Bucciarelli said. “So is Jezierski. And Koby’s going to be in it, too. … But I feel confident.”

Kreiger, of Osceola, Ind., slid in behind Clapper in sixth place with a five-bass weight of 18 pounds, 6 ounces Friday. Unlike many of his competitors who made long runs onto Lake Erie to find fish, he is fishing within spitting distance of the takeoff point at Elizabeth Park Marina. Focusing on the current of the Detroit River, he mined it for the lead on days one and two and a qualifying spot into the final round. He believes the location will hold up again tomorrow.

“If I can get five of the right bites, I think I can win,” he said.

Beavercreek, Ohio’s Miles Johnson managed to hold onto to the lead qualifying spot heading into tomorrow’s Co-angler Division finals. Fishing out of the back of Kreiger’s boat not more than a few minutes away from Elizabeth Park, he caught five bass weighing 18 pounds, 1 ounce and placed first for the second day in a row.

“Yeah, it was a real rough boat ride,” he joked, then added. “I feel like I’ve got a really good shot tomorrow.”

But Johnson wasn’t alone at the top today. Jeff Brown, a young co-angler from Holland, Mich., also landed five fish weighing 18-1. While he placed second in the results because Johnson had more weight in the opening round, the EverStart Series rookie was no less thrilled about his performance.

Rookie Renee Flesh of Edwardsburg, Mich., captured fourth place with a five-fish performance weighing 17 pounds even. She was the only female to make it into and past the semifinal round.