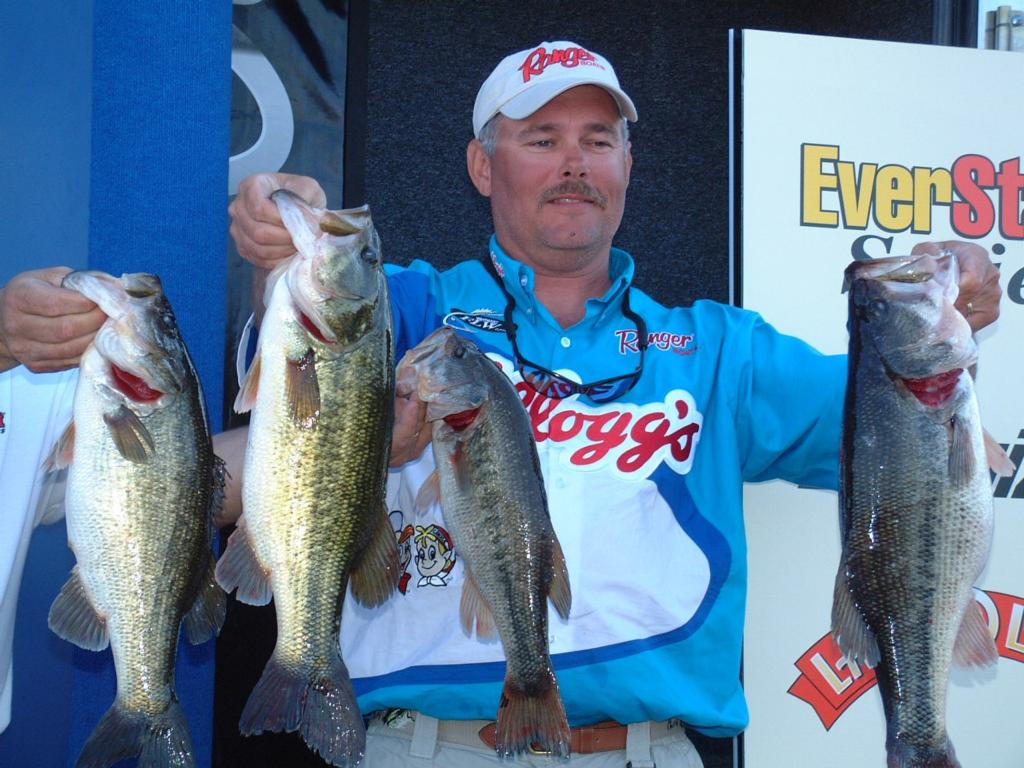 Tutt placed five bass on the scale that weighed a collective 20 pounds, 11 ounces to win the Pro Division and $50,000 in cash and prizes in Saturday?s final round of the first EverStart Series Central Division tournament of the year. Photo by Jeff Schroeder. Angler: Jim Tutt.
February 9, 2002 • Jeff Schroeder • Archives

JASPER, Texas – The last time pro angler Jim Tutt won an EverStart Series event, Charles Carlile won the Co-angler Division the same day. That was almost three years ago at the 1999 Central Division tourney on Lake of the Ozarks in Missouri.

So Saturday at the Jasper Wal-Mart, Tutt waited offstage with the other pros to weigh in his fish and he watched as Carlile won the Co-angler Division in front of him – again. Right then Tutt knew that somehow the fishing gods were on his side this week.

“When things get lined up just right and everything just goes your way, that’s what I’m talking about, man!” he said.

Tutt walked up and placed five bass on the scale that weighed a collective 20 pounds, 11 ounces to win the Pro Division and $50,000 in cash and prizes in Saturday’s final round of the first EverStart Series Central Division tournament of the year. He defeated Dicky Newberry of Houston, Texas, who placed second (worth $10,000) with five bass weighing 17 pounds, 10 ounces.

It was the second EverStart win for the pro from nearby Longview, Texas, and it was just reward for an angler who has struggled for a year-and-a-half on the tournament circuit. In fact, it was a struggle that began with his last showdown against his friend Newberry.

Back up to October 2000. It was the Red Man (now BFL) Regional at Lake Ouachita in Arkansas. Tutt had weighed in a good five-bass stringer worth 15 pounds, 5 ounces and looked headed toward victory. Then Newberry came up at the end with a 15-11 catch and beat him by 6 ounces.

“I was happy for Dicky, but it was a blow,” Tutt said.

And the narrow defeat seemed to spark a low point in his career. The next season, 2001, Tutt – who has no fewer then 18 top-10 appearances and four wins in BFL, EverStart and FLW tournaments – didn’t make a single final-round cut on any FLW Outdoors circuit.

“Last year was my worst year in five years,” he said. Motor problems in key tournaments, lost fish and that runner-up finish at Ouachita dogged him the entire season. “It was messing with my head and made me lose some of my confidence.”

This year Tutt has rebounded with a vengeance. Last month at the Lake Okeechobee, Fla., FLW Tour event he made the final cut and finished in eighth place. He took positive mojo away from that event and came home to Sam Rayburn this week with a purpose.

“I’m feeling great, man. I don’t want to sound cocky, but I’ve been working really hard,” he said yesterday after leading the semifinal round. And possibly what he means is that it was no accident that he won this tournament.

Tutt fished the same spot all four days at Rayburn. It’s a big area at mid-lake with a few key pockets along the grass line that he scouted in practice and protected as best he could throughout the tournament. Using the same ¾-ounce orange Rat-L-Trap all week, he worked slowly and deliberately in about 5 to 8 feet of water. His key spots yielded one large fish after another at a time when many anglers had trouble catching fish just big enough to keep.

“There’s just a lot of fish in this area,” Tutt said. “It took me about an hour-and-a-half to make my circuit (up and down the bank) and by the time I came back around the fish would be refreshed. The wind didn’t hurt my fish and the sun didn’t make a difference.”

By 10:45 this morning he had his limit, and he culled two fish later on. Coming in for weigh-in, he knew he had another good sack of bass – he estimated it at around 17 pounds – but he wasn’t sure it was enough to win.

As it turned out, he short-changed his own fish weight because he didn’t have time to weigh one of the bigger ones in his boat. By the time he came up, stood next to the leader at the time, Newberry, and weighed in the only stringer over 20 pounds today, the rest became history.

“I’m so nervous I can hardly talk,” Tutt said afterward. “But I got him this year.”