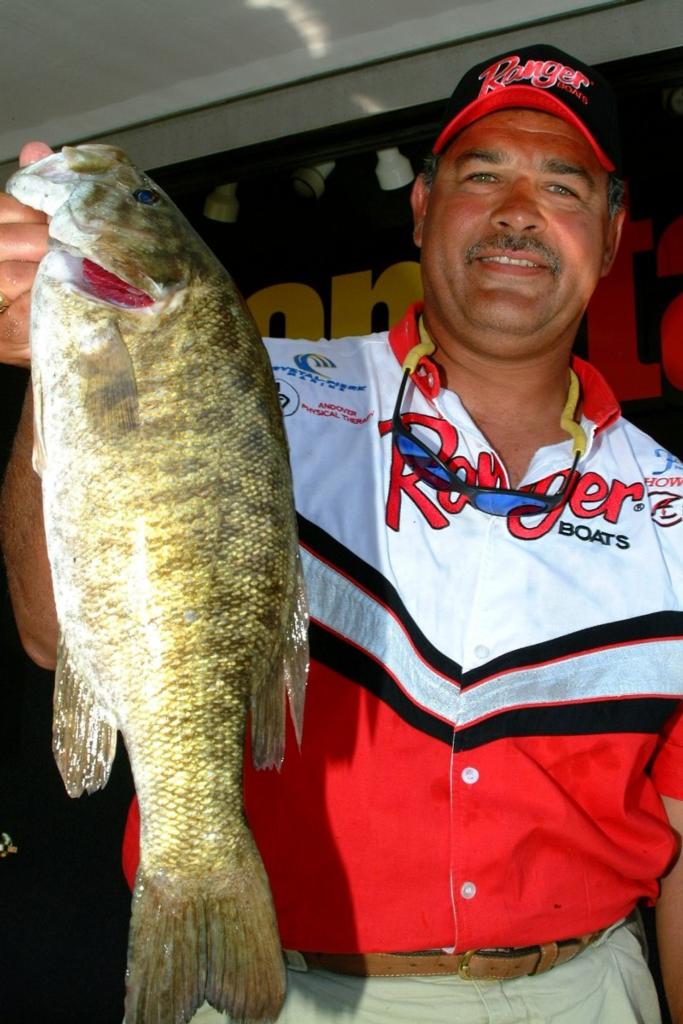 Ramsey nets first place in Co-angler Division, Mississippi River proves to be a formidable foe for most anglers

RED WING, Minn. – Anglers can only hope that the rest of the 2002 Northern Division season won’t be as brutal as today’s competition on the Mississippi River. When all was said and done, a fickle bass bite, congestive barge traffic and high water levels all served to put a damper on today’s stringer weights – some of the lowest ever recorded in the history of EverStart Northern Division competition. In fact, out of 330 anglers, only 26 caught five-fish limits – including only four limits in the entire Co-angler Division.

However, not everyone was overwhelmed by the difficult fishing conditions. Local fishing pro Howie Lee of Brooklyn Park, Minn., managed to turn in the best performance of the day with an 11-pound, 6-ounce sack. Not surprisingly, Lee said his extensive experience on the Mississippi was an invaluable ingredient in today’s competition.

“I’ve been fishing this body of water for eight or nine years now,” he said. “I’ve taken my lumps on the Mississippi before, but things just kind of fell together for me today. I’m very happy.”

Lee also said he was not surprised that many anglers struggled out on the water today.

“This is a big body of water, but it fishes very small,” said Lee. “A lot of guys who don’t have the experience fishing here get overwhelmed by the size of the fishery. And right now, with the water levels as high as they are and the water as muddy as it is, if you don’t figure something out, it’s really tough to catch them. This is definitely a tough body of water to fish right now.”

Unlike many anglers, Lee – who is fishing in the very first EverStart tournament of his career – had very few problems catching fish today.

“It seemed like I hooked into a 3-pounder with every cast I threw out there this morning,” said Lee, who used a combination of Lucky Craft Popper topwater baits and Gary Yamamoto Senkos to land the majority of his catch. “I probably had a limit by about 10 a.m. this morning. It was a good day.”

Lee, who targeted rocky points near weedbeds all day long, said he is going to try and stick with the same game plan for tomorrow’s competition.

“I’m going to go back and do the same thing tomorrow,” he said. “But if it doesn’t work out, I have a lot of other spots I can go to.”

Kreiger on verge of making another cut

It only took Koby Kreiger one day to show why is is one of the best anglers in the history of the EverStart tour. Boasting an amazing 11 top-10 EverStart finishes since 1998, Kreiger used an 11-pound, 5-ounce catch in today’s competition to grab hold of second place and put himself in prime position to make a run at the title on the Mississippi River.

“I’m happy with what I did today,” said Kreiger, a resident of Osceola, Ind. “I only fished one area, and I had a limit by around 10 a.m. I took a little gamble and threw two keepers back, but it worked out for me. Hopefully, I’m in a good position to make the cut.”

Kreiger, who flipped a jig and a homemade crankbait to land the majority of his catch in about 2 1/2 feet of water, said he thinks the cut should come in around 16 pounds.

Because of stringent Wisconsin DNR regulations, anglers are not permitted to cull fish once they are placed in the livewell – meaning that anglers have to make a tough decision every time they catch a fish. If an angler decides to keep a fish and put it in the livewell, it must count towards an angler’s final stringer.

David Reault of Livonia, Mich., won the day’s big bass award in the Pro Division after landing a 3-pound, 14-ounce bass. Reault, who was in 42nd place heading into tomorrow’s competition, won $750 for his efforts.

Using a catch of 10 pounds, Randy Ramsey of Riverside, Ill., snared the top spot in the Co-angler Division and became one of only four co-anglers to turn in a five-fish limit.

“It feels really good, actually,” said Ramsey of his performance. “I came here hoping to do well because I’ve had a tough year so far. And so far, it’s worked out. I really slowed down my presentation, and that helped me. And my pro partner was fantastic.”

“I’m definitely excited about tomorrow,” he said. “My goal is to catch one or two fish and make the cut. That would be great.”

Tom Howland of Riceville, Iowa, took over second place in the standings after recording an 8-pound, 12-ounce stringer.

Edwin Snook of Floyds Knobs, Ind., won the day’s big bass award in the Co-angler Division after netting a 3-pound, 15-ounce bass. Snook, who was tied for sixth place heading into tomorrow’s competition, won $250 for his efforts.