McGahan is the man 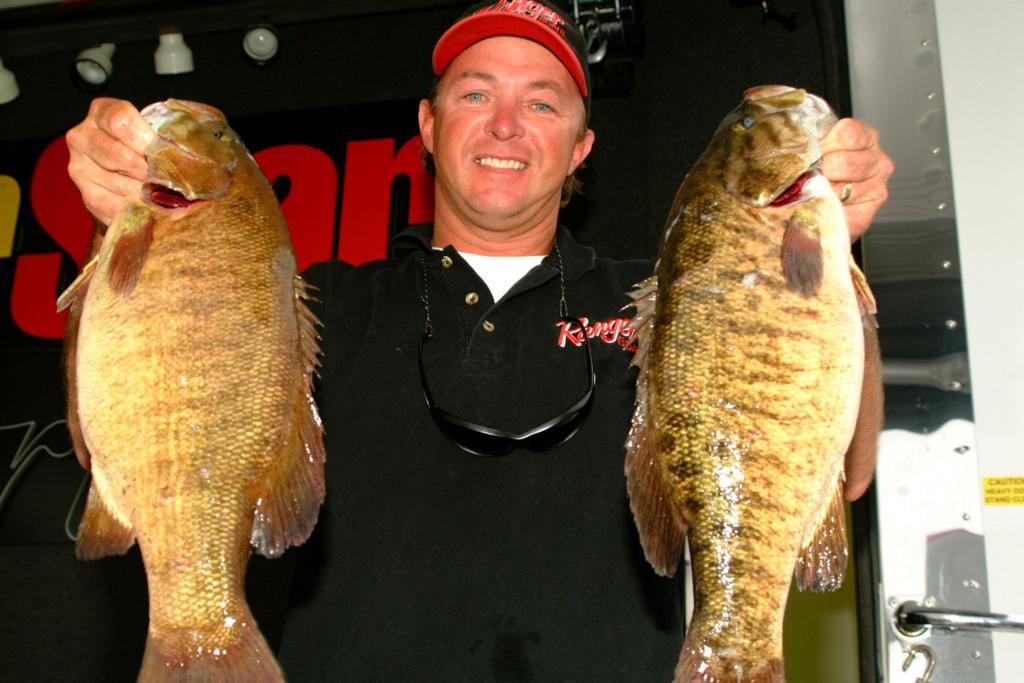 CLAYTON, N.Y. – Throughout the week it was clear that the only thing that was going to prevent Steven McGahan from winning his first EverStart tournament title was another bout of seasickness. Despite falling deathly ill on the open waters of Thousand Islands during yesterday’s competition, McGahan managed to completely regroup during today’s finals en route to landing the biggest stringer of the entire tournament – a whopping five-fish, 21-pound, 4-ounce limit.

To be sure, it couldn’t have come at a better or bigger moment.

“It’s awesome. This is the biggest win of my career,” said McGahan, who found himself atop the leaderboard in three of the four days of tournament action. “I did really well at this tournament last year, so I felt pretty confident coming in. This has just been a great experience.”

McGahan, who netted a whopping total of 78 pounds, 14 ounces of smallmouth bass during the Aug. 21-24 EverStart Northern Division event, also had the satisfaction of watching his partner win the tournament’s Co-angler Division crown.

However, while McGahan had relatively little trouble catching fish during the first three days of competition, things didn’t go nearly as smoothly during today’s action.

“I got pretty sick on the water yesterday, but I really didn’t have any trouble catching fish,” he said. “Today was a different story. Things really changed around. Luckily, I wound up landing two 4 1/2-pounders with less than an hour left to go in the tournament. I was really starting to get nervous there for a while.”

Throughout the four-day competition, McGahan never deviated from his plan of attack. Every morning McGahan took an hour boat ride to one of his favorite islands near the middle of the lake. There, he drift-fished along a 100- to 200-yard sloping stretch of bottom contour, landing smallmouth after smallmouth in about 18 to 30 feet of water.

“I fished the same exact water all four days,” he said.

However, despite the fact that nearly 95 percent of the field was having success fishing a Senko lure, McGahan forged ahead with his own strategy, using a green, pumpkin-colored tube bait each and every day. In fact, McGahan didn’t change his bait once.

With his confidence mounting with each passing moment, McGahan knew that his biggest fear all along – with the exception of getting sick – was not being able to get to his spot due to excessively windy conditions.

“As long as it didn’t get too windy, I knew I could get to my spot,” he said. “And once I got there, it was crazy fishing. I would just look at my depth finder, throw out my tube bait and catch a fish. It was almost that easy. Luckily the wind never got bad enough to prevent me from getting there.”

Local hero Dean Meckes of Clayton, N.Y., who gave McGahan a run for his money throughout the tournament, ultimately finished the day in second place after registering a gutsy catch of 19 pounds, 14 ounces. However, Meckes acknowledged that his struggles earlier in the day almost cost him dearly.

“I was really nervous this morning,” he said. “At one point, my co-angler partner had five fish in the boat before I even had one fish.”

However, as the day wore on, Meckes regrouped. And for his efforts, he managed to walk away with a check for $10,000.

“I had a beautiful week, no doubt,” he said. “I had good partners, and I caught fish all week. In fact, I don’t remember ever catching so many great fish four days in a row. I’ve had a lot of fun.”

Randy Ramsey of Battle Creek, Mich., used a total catch of 19 pounds, 6 ounces to capture third place and a check for $9,000. And he couldn’t have had more fun doing it.

“This is my first time up there, and it’s just an incredible fishery,” said Ramsey, who fished in approximately 7 feet of water with a Senko bait and Carolina rig to land the majority of his catch. “It was really exciting. I’ve had a blast.”

And the key to his success?

“It was a really slow bite,” he said. “So I had to make sure that I didn’t fish too fast.”

Although Tom Dolin of Palatine Bridge, N.Y., turned in an amazing 17-pound catch to capture fourth place and a check for $8,000, it was clear that, despite the accomplishment, there was also a hint of regret.

“The only disappointment I had was that I left a good school of fish alone for too long, and someone else found them,” he said. “But when you get this far, you have to gamble. Overall, I had lots of fun though. I just love this lake.”