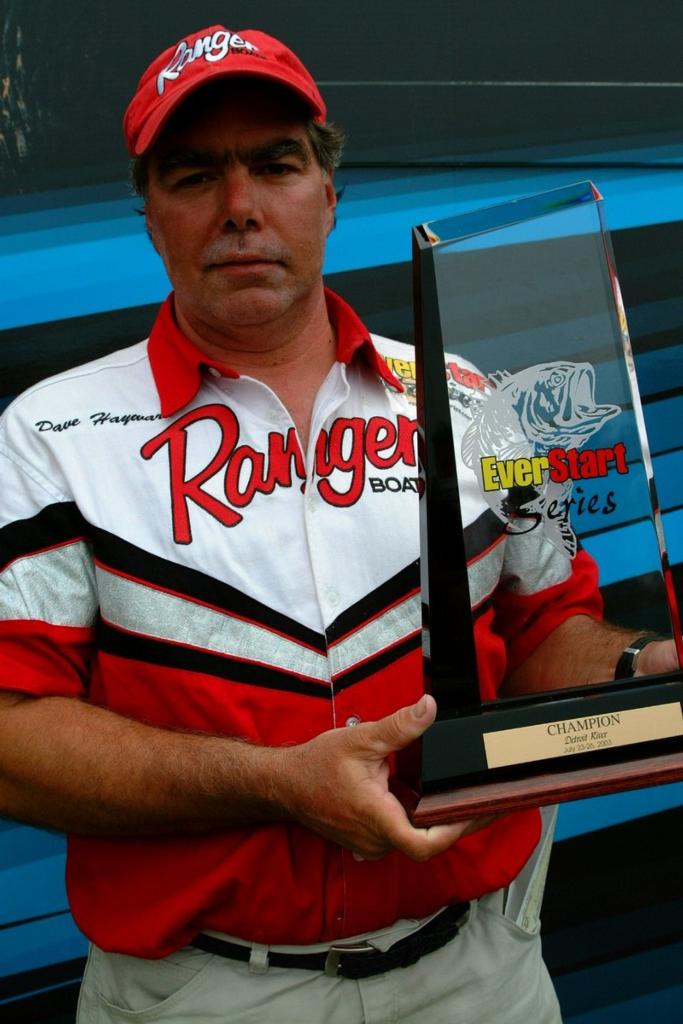 TRENTON, Mich. – After saving his best spot all week for the finals, David Hayward of Sylvania, Ohio, quickly discovered early Saturday morning that his prime location was already occupied by a local fisherman. Undaunted, Hayward made his way to his second-best area. Unfortunately, that didn’t work out either. Running out of ideas, Hayward raced to the only spot left he could count on. Finally, after a nerve-wracking few hours of fishing, Hayward found what he was looking for – a fishing hole good enough to win a tournament title.

In the end, Hayward landed an incredible 17-pound, 15-ounce stringer, blitzed the rest of the field in the process and walked away with the first EverStart victory of his career.

“I came up through all the local tournaments and the BFL league to get here, and this is definitely what I’ve been working for a long time,” said Hayward, a three-year veteran of the EverStart Northern Division who now boasts 11 top-10 finishes at FLW Outdoors events, including three BFL wins. “Fishing in an EverStart tournament and finally winning one is a pretty awesome feeling. It’s like a dream come true.”

Hayward – who fished a watermelon and gold flake ISG Dream tube bait of his own design – said he targeted bass on deep structure in about 30 to 35 feet of water.

“I fished that tube bait exclusively all week,” he said. “I had a plan coming into this tournament and I stuck with throughout. It’s great to see that all that planning really paid off.”

And pay off it did. By virtue of his victory, Hayward walked away with $65,900 in cash and prizes including a brand new, fully equipped Ranger boat.

“It was just a fantastic week,” he said.

“For starters, I didn’t lose by 1 ounce this time,” said Zona. “And also, this is the tournament I was worried most about on the schedule. I usually struggle out here more than any other place we go to. So, overall, I’ve very happy with the way things worked out.”

“I was going to make a long run this morning, but I stopped at the river and caught a limit pretty quickly. So I decided to stay,” said Zona, who walked away with $10,000 in prize money. “Looking back on it, I probably should have kept on going.”

Zona – easily one of the biggest characters on the tour – said that this was as challenging of a week as he’s ever had.

“I was changing things up every day,” he said. “I know how to fish for smallmouth bass on the lake, but on the river, it’s a different story. I still have a lot to learn. But I have to give a lot of credit to (fellow competitors) Mike Trombly and Kevin Vida. They just about taught me everything I tried this week. But it was rough out there. It was a tough go.”

With a near stranglehold on the EverStart Northern Division Angler of the Year race at the midway point, Zona said that he could hardly wait to hit the next tournament.

“I’m really excited about the next two tournaments,” he said. “Overall, it’s been a great week. But I’m definitely ready to see my family again.”

Mike Trombly of Perrysburg, Ohio, used a 14-pound, 3-ounce stringer to grab third place and a check for $9,000.

“I decided to swing for the fences today,” he said. “I just came up one big bite short.” 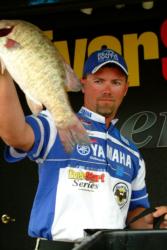 David Lefebre of Erie, Pa., had arguably the toughest hard-luck story of the finals. After dropping his cell phone in the lake during the opening round of competition, Lefebre watched helplessly this morning as his motor broke down.

“I forget to put my gas cap on earlier this week, and I got a bunch of water in the gas tank,” said Lefebre, explaining the reason behind his engine problems earlier in the day. “Because of that, I got a late start this morning and was only able to take advantage of the tail end of my bite. And that was basically all the fish I caught today. That late start killed me.”

But that was just the start of his problems. High winds and fierce waves also wreaked havoc on his boat.

“My trolling motor snapped off, part of my main engine busted, and I lost a bunch of screws on my boat as well,” he said. “The whole boat pretty much just came apart today. I broke nearly everything I own. I’m just happy that I got back in one piece today.”

However, believe it or not, that wasn’t the worst of it.

“My depth finder and GPS unit fell overboard,” he said. “And I lost my wedding ring. I’m still not sure how I did that. My wife is going to kill me. It was a very trying week.”

Although it was a small consolation, Lefebre did manage to walk away with a 13-pound, 5-ounce catch good enough for fourth place and a check for $8,000.

“I thought it was going to be a phenomenal day out there, but we just didn’t catch the numbers we caught during the previous days,” said Izumi, who hosts his own fishing show on the Outdoor Life Network. “But hey, I still had a lot of fun out there.” 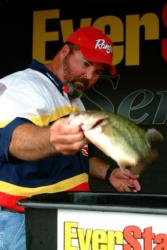