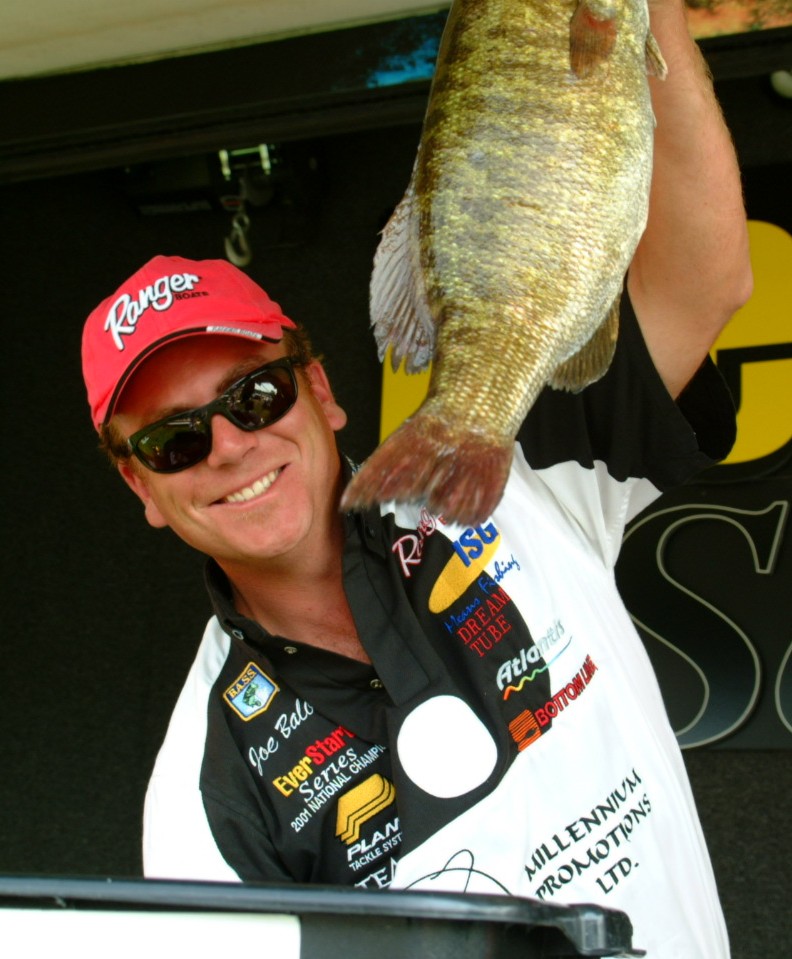 PORT CLINTON, Ohio – Joe Balog likes fishing at home. And he should. The pro from Independence, Ohio, has already racked up nine top-10 finishes in Wal-Mart BFL competition on the western part of Lake Erie, including a victory. So it surprised very few people Thursday when the former EverStart Series Championship winner (2001, Alabama’s Pickwick Lake) took control of the pro field after the opening round of Northern Division competition on his home lake.

Balog weighed in the second-heaviest five-bass limit Thursday with 19 pounds, 9 ounces, which pushed his two-day total to a division-leading 38-7. Vic Vatalaro of Kent, Ohio, followed in second place – moving up from third Wednesday – with an opening-round total of 37-2. Scott Dobson of Waterford, Mich., who weighed in the only sack over 20 pounds (20-8), moved up to third place with 36-9.

On a couple of days that saw several local favorites struggle – like Detroit River EverStart winner David Hayward of Sylvania, Ohio, and Steve Clapper of Lima, Ohio, who many locals say is the best bass angler on Lake Erie – Balog took the mantle as the one to beat Thursday.

Balog caught his fish on tubes, a watermelon-gold ISG Dream tube, which is nothing new. Almost everybody fishes tubes here because they mimic the smallmouth population’s primary food source, gobies. Also, he’s fishing near Pelee Island, which is nothing special either since probably more than half the field fished around there.

But the difference between Balog and some of his fellow Ohioans who didn’t make the cut is perhaps the depth at which he’s fishing. A lot of fish have been caught this week in shallow, clear water. Many competitors came in with stories about fishing in areas that looked like “aquariums” because they could see so many fish. But they were not biting very well, and those that did were often pretty small.

Not Balog. “Everybody knows that I like to fish deep,” he said. “I caught my shallowest fish at maybe 25 feet deep, but most of them I caught between 32 and 36 feet.

“This time of year, the fish are more reliable deep, and they’re bigger. The last five years, I’ve been fishing deeper and deeper structure. I typically live and die by that.”

So far, Balog, who caught 20-pound sacks each day in four days of practice, is living large. The scary thing is, he said he hasn’t even touched some spots he knows that have even bigger bass.

“I’ve got some areas where, if I make it to Saturday and I can move around, I’m convinced I can catch some really big fish,” he said. “Some of my primary, key stuff I haven’t even been to yet.”

Those are strong words from a guy who’s only halfway through a four-day tournament. But Balog isn’t cocky; he’s just confident. Not to mention superstitious. When he won the 2001 championship, Balog admitted that he wore the same pair of “lucky Caesar’s Palace boxers” throughout the event – and reveled in the fact that he didn’t wash them. This year, though, he retired the grimy undergarment in favor of a lucky stone.

“I didn’t bring them because, for the last year and a half, I’ve been doing poorly. So I gave up on them,” he said. 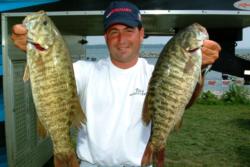 Vatalaro is one of the other Lake Erie locals who haven’t succumbed to the home-lake pressure this week. In 2001, he won the Northern Division event launched nearby at Sandusky, and it looks like he’s rolling again.

“It was pretty similar today to what I did yesterday,” said Vatalaro, who returned to his location east of takeoff near Cleveland. “I just went down there, got my bites and left. There was only one other boat in there with me.”

While he was happy with his performance in the opening round, the competitor in Vatalaro was disappointed with losing a big smallmouth early in the day.

“I thought I had a sheepshead,” he said. “It was moving around and fighting like one, but it came up and it was a 5 1/2-pound smallmouth. But I lost it.”

Dobson’s 20-pound-plus sack Thursday was the fourth-heaviest stringer of the tournament so far, and he caught it without the aid of practice time before the event.

“The area I have, a reef off the islands, I’ve been fishing for about three years,” he said. “I live in Michigan, and fortunately you can get out there from both sides of the lake. I’ve been pretty fortunate. With the wind out of the south, it really turned on the fish.”

It’s a make-or-break location, he said, in 25 to 30 feet of water. He fished with tubes and a Carolina rig.

“I’m not getting a lot of bites – I’m making multiple casts and getting about a fish an hour,” he said. “It’s a place where you could get just two fish or a really big bag.”

Robert Sherry of Saint Charles, Ill., placed fourth in the Pro Division with an opening-round weight of 35 pounds, 8 ounces, and Mike Trombly of Perrysburg, Ohio, placed fifth with a weight of 35-0.

One of the hardest things to accomplish in tournament fishing is consistency from the back of the boat. But Trevor Jancasz is proving that it can be done. The co-angler from White Pigeon, Mich., hasn’t missed a cut all season long in Northern Division competition. In fact, he’s caught a limit of bass every single day of competition so far this year, finishing the first two events in fourth and eighth place, respectively, and leads the point standings.

Thursday, he continued to assert his dominance by leading the opening-round co-angler field at Lake Erie by over 5 pounds. He caught 10 bass weighing 36 pounds, 11 ounces over the first two days – a weight that, had he been fishing as a pro, would have put him into third place in that division.

“It feels great and I feel fortunate that my pros put me on fish and I’m able to keep catching them every day,” was Jancasz’s politically correct explanation for his success.

But, when prodded, he acknowledged it might be more than that. “I’ve got great teachers. (Mark) Zona and (Randy) Ramsey are my roommates on the road,” he said. Zona currently leads the Northern Division pro points standings and Ramsey ranks 12th. Plus, he practiced with Balog the Tuesday before the tournament and is paired with him officially for Friday’s semifinals.

“I’m looking forward to it. When I went with him the other day, we really caught them. Hopefully, we’ll do the same thing tomorrow. Maybe we’ll even draw each other again for Saturday,” he said, slyly alluding to the possibility that they’ll both maintain the lead after Friday.

While others were apparently drop-shotting around him, Jancasz, who fished with Liechty Thursday, said he just used a watermelon-colored tube with a 1/2-ounce weight. They fished in 25 feet of water.

Billy Gwaltney of Bella Vista, Ark., and Jason Putman of Kirkwood, Mo., tied for co-angler big-bass honors. Each caught a 5-pound, 4-ounce smallmouth that earned them $250.

The semifinal round commences Friday as the top 20 competitors from each division take off at safe light from Dempsey State Access located on Bayshore Road in Marblehead, Ohio. All anglers’ weights will be reset to zero. The top 10 anglers in both divisions following tomorrow’s fishing will advance to Saturday’s final round.