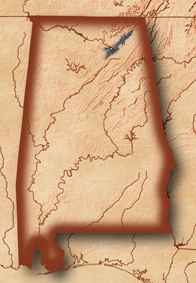 Team Snickers pro Pat Fisher of Dacula, Ga., has put together back-to-back eighth-place finishes at Guntersville Lake over the last two EverStart Series seasons, but he would like to improve on his record when the Eastern Division returns to the popular Alabama fishery.

“We’re going to be there about two weeks earlier this year, so there should be a lot more fish in shallow water,” Fisher said. “There will be some fish on beds all over the lake, but the majority of the bass are going to be just coming off the beds and getting into their postspawn patterns.”

Because water temperatures will still be cool, Fisher predicts the better catches will come from water ranging from 2 to 4 feet deep. The bass should be relying heavily on inside grass lines to ambush shad, fry and other forage.

Any number of lures will draw strikes, but Fisher believes chartreuse/white spinnerbaits, top-waters and soft jerkbaits will produce most of the heavier sacks.

The Georgia pro looks for the tournament to be won on the north end of the lake, more than likely in north or south Sauty creeks. It should take around 13 to 14 pounds per day to make the cuts and upwards of 30 pounds during the final two days to win it.