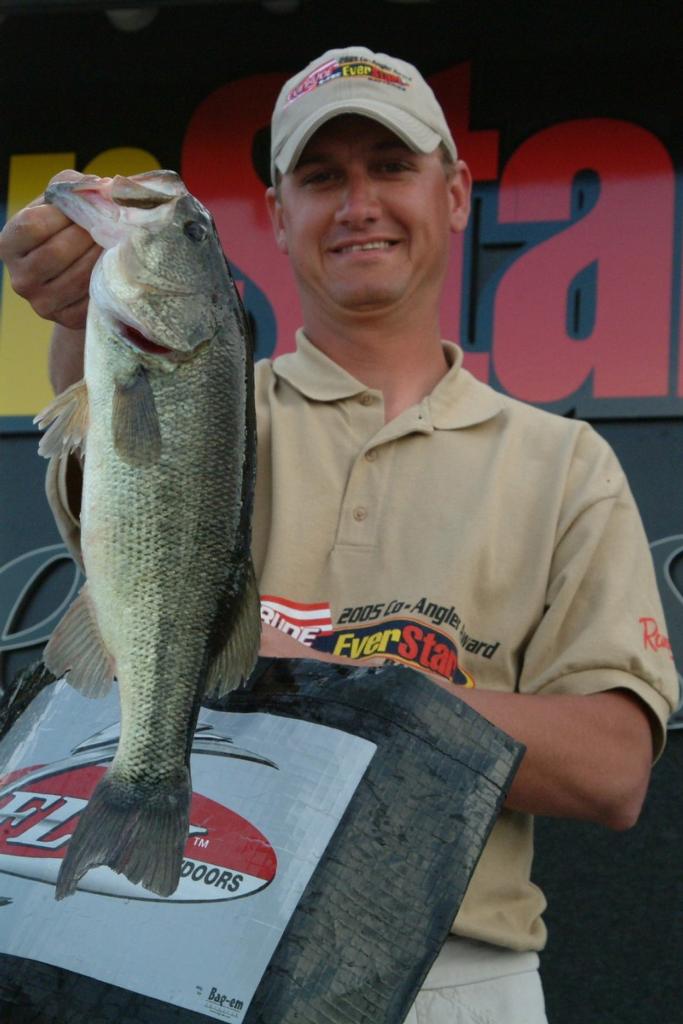 HENDERSON, Nev. – In only his third entry in EverStart Series competition, co-angler Lewis Milligan of Roseville, Calif., claimed victory at the Western Division event on Lake Mead. The rookie’s four-bass catch on Saturday weighing 9 pounds, 4 ounces bumped him up to first and earned him $4,400 cash.

To take the win, Milligan first had to get past Gary Key of Phoenix, who had led days two and three. Key was the last angler to weigh in, leaving Milligan on stage with sweaty palms, waiting to hear the final outcome.

Key caught 6 pounds, 5 ounces Friday and landed in first place, and he caught that exact amount Saturday but it was good for only fourth place, handing Milligan the victory ahead of Peoria, Ariz., angler Charlie Crawford.

Milligan finished day one in 12th place with 7 pounds, 2 ounces and followed that up Thursday with another 7 pounds, 12 ounces that put him in fourth place and gave him a chance to fish the final two days.

The bite was off on day three, and he caught his lowest weight of the tournament – 6 pounds, 3 ounces – but nonetheless landed in second, only 2 ounces behind day-three leader Key.

But on the final day, he lucked out with a borrowed bait and brought in his biggest numbers of the week – four bass for 9 pounds, 4 ounces that gave him a winning two-day total weight of 15 pounds, 7 ounces.

Though Milligan no doubt has finely honed fishing skills of his own – he scored respectable finishes in the 40s in his first two EverStart events earlier this season – he owes Saturday’s victory to his day-four partner Tim Klinger of Boulder City, who loaned Milligan the bait that caught him his winning fish.

“I can do nothing except thank Tim,” said Milligan, who is currently ranked ninth in Western Division points. “I was throwing jigs all day, and it was rough. We ended up making a move, and he handed me one of his baits, and my four fish came on that bait.”

Indeed, Klinger and Milligan endured the rough weather conditions today on Lake Mead that included high winds and even a little bit of rain. The heavy winds all but eliminated Klinger’s sight-fishing bite, prompting the move – and the bait change.

Milligan said he was fishing a brown/purple 3/4-ounce jig most of the week but switched to a brown and red Yamamoto jig mixed with purple to claim his bass today.

“Today it was different,” he said. “I really had to slow down and move my bait a little more, although the big one whacked it as soon as it hit the water.”

Milligan said that Klinger guessed that the original bait was no longer effective because of its frequent use. “The fish get accustomed to it,” Milligan said.

Peoria, Ariz., angler Charlie Crawford is learning pretty well how it feels to be a bridesmaid.

Last year on Lake Havasu, Crawford took second place, and he was the runner-up again today on Lake Mead with a two-day catch of 14 pounds, 15 ounces that earned him $3,400.

“It’s tough to compete with these guys,” Crawford said.

Crawford has had a handle on the finicky Lake Mead bass all week, finishing day one in second place and remaining there on day two. He slipped to third on day three and moved back up to second to finish the tournament.

Crawford for one did not have a problem with the wind in the area he fished today with his pro partner Dennis Kolender.

“The wind wasn’t that bad out there today,” he said. “We made a long run, and it paid off.”

Crawford caught his bass this week drop-shotting a 6-inch oxblood/red flake Roboworm, although he changed it up today and threw a brown/purple jig that landed four of his five bass.

“With the lake coming up, there were a lot of flooded tumbleweeds, and the fish just swarmed it,” he said.

Another EverStart rookie, John Bitting of Westminster, Calif., earned a top-10 this week on Lake Mead, landing in third with a two-day total of 13 pounds, 5 ounces worth $3,125.

“My pro today – unbelievable,” Bitting said of his day-four pro partner Thanh Le, who won the Pro Division. “All I can say is we were lucky.”

No. 4 co-angler Key found himself on the losing end of a battle with a large fish of substantial weight. While most of the bigger fish brought in this week have fallen somewhere in the 3-pound range, Key claims he lost one a bit heavier than that, causing him to drop from first to fourth.

“I had one that was probably 4 or 5 pounds,” he said. “It snapped. Our jaws just hit the deck. It was the biggest fish we’ve seen so far.”

Nevertheless, Key leaves Lake Mead as the No. 1-ranked co-angler thanks to two consecutive top-10 finishes. He has not finished lower than 12th all year. His two-day total catch of 12 pounds, 10 ounces earned him $2,240.

“The key to my success was I practiced four days on my own to see what was working,” he said, adding that he plans to head east to fish the FLW Tour next season now that he has retired.

The EverStart Series will next visit Lake of the Ozarks near Osage Beach, Mo., for a Central Division event April 20-23. The Western Division will head to the California Delta May 4-7 for its fourth and final regular-season event.