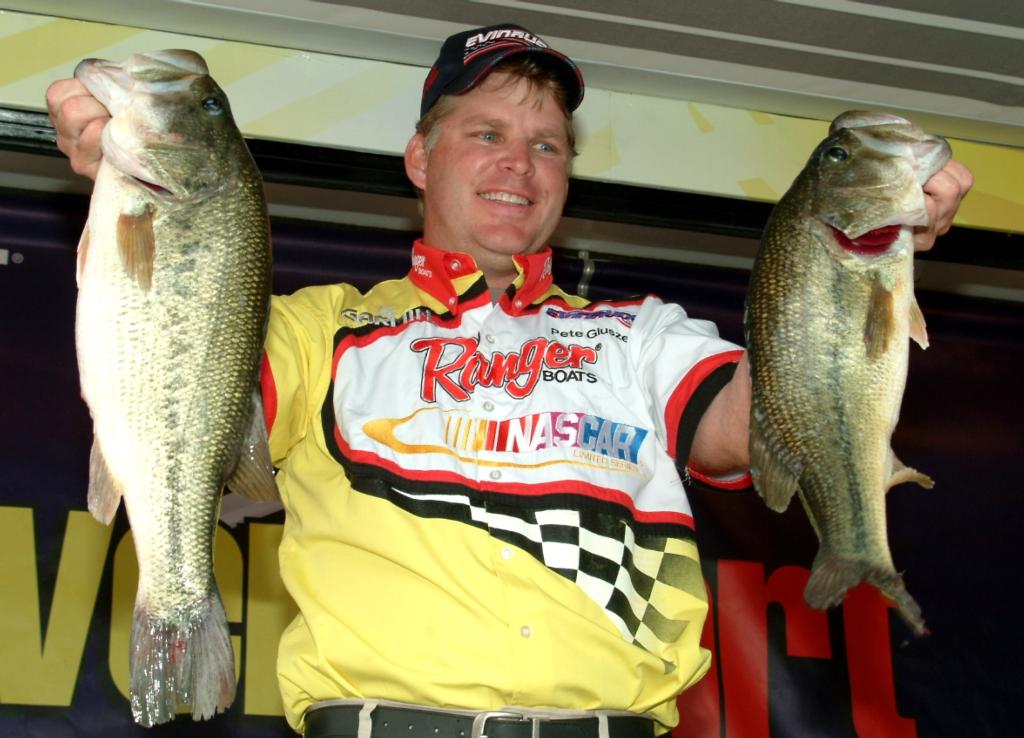 HENDERSON, N.C. – It’s summertime and we’re heading north, which means it’s open season on five-bass limits in the EverStart Series. Firing the biggest shot in the opening salvo at Kerr Lake was Franklinville, N.J., pro Pete Gluszek, who led day one of Northeast Division competition with a hefty limit weighing 22 pounds even.

Kerr Lake (pronounced “car lake” locally, also known as Buggs Island) coughed up a mighty 104 limits to the Pro Division Wednesday – over half the field – plus an additional 43 of them to the co-anglers. One gets a sense that, with lakes such as Erie and Champlain yet to come, this is only the beginning for these lucky Northeast Division bass anglers.

“I fished at Kerr Lake once about five or six years ago. I’d heard stories about what a great fishery this was, but it didn’t quite shine for us back then,” Gluszek said. “But, man, did it shine today.”

Like most of Wednesday’s leaders, Gluszek focused on postspawn largemouths moving out on the southern end of the lake.

“I think there are still some spawning here, but I’m keying on the postspawn fish,” he said. “The fish seem to be relatively fresh off the beds, so they’re still a little skinny. If it was the normal season, those probably would have weighed 25 to 30 pounds.”

Gluszek said he caught around 15 keepers Wednesday, not unlike many of the top pros. What set his weight apart from the field, however, was his ability to find the proverbial zone.

“I keyed on one general area fishing the main lake section,” he said. “I was using a combination of fast baits and slow baits. There were phases where the fish would slow down and then get aggressive again. I was dialed into those changes throughout the day, and I just managed to make the right changes at the right time.”

While cloud cover blanketed the region for most of the day, intermittent wind, rain and even boat wakes seemed to spur Gluszek’s bigger bass into biting.

“I just tried to listen to them. I was able to adjust to speed-up mode at various times today,” he said. “I think that if I would have stayed fishing slowly, I would have come in with about 15 pounds, but I was really able to key on those changes. These are the days that you dream of.”

Perry, a local pro out of Raleigh, N.C., caught a limit weighing 18 pounds, 15 ounces for second.

He, too, spent the day running and gunning on aggressive postspawners at the upper end of the lake and ultimately landed about 13 keepers, including a 5 1/2-pound kicker bass.

“I probably made 50 stops today,” he said. “They’ve been like this for the last month.”

While guarded about his technique Wednesday, Perry did say that he is doing something “different” to land his biggest fish.

“And I believe that I can catch them even bigger tomorrow,” he said.

“It’s awesome,” he said. “Anytime you can catch that kind of a bag, you’ve got to be satisfied.”

Jeffcoat said he played musical spots with other boats on the near end of Kerr Wednesday, sharing fishing holes with fellow competitors. He caught his bigger fish on a topwater, which was a popular bait among those who disclosed their techniques.

“Maybe I’m throwing a little different bait than most people, a bigger bait,” he said. “I got lucky and had two or three big bites.”

Mike Hoskins of Dumfries, Va., placed fourth for the pros with a limit weighing 17 pounds, 3 ounces.

Unlike others working a topwater close to the marina at Satterwhite Point, he ran downlake and found a solitary spot that produced for him early.

“We had everything to ourselves,” Hoskins said. “It’s a slow bite, not a fast bite. I’ve basically got three different patterns: one shallow, one deep and a jig pattern. I got my limit early this morning and just went fishing for the rest of the day.”

He caught the bulk of his fish on a Zoom Super Fluke.

“They were just schooling everywhere and busting shad on points. We were just catching them here and there,” he said. “When I caught my biggest bass, I brought him in and he had five of his buddies right there with him.”

Rounding out the top 10 pros after day one at Kerr Lake:

“I had an excellent day. It was one of those days where you just go out and have a blast,” he said. “I caught a couple on a lizard, a couple on a topwater, but mainly I guess I just happened to be in the right place at the right time.”

Marshall Honaker of Alderson, W.Va., placed second for the co-anglers with a limit weighing 16 pounds, 1 ounces.

Third place on the co-angler side went to Gary Vick of Wilson, N.C., for a limit weighing 15 pounds, 14 ounces.

Day two of Northeast Division competition at Kerr Lake begins as the full field of 200 boats takes off from Satterwhite Point Marina at 6 a.m. Eastern time Thursday for the second half of the opening round. Following tomorrow’s action, both fields will be cut to the top 10 anglers apiece based on two-day total weight.