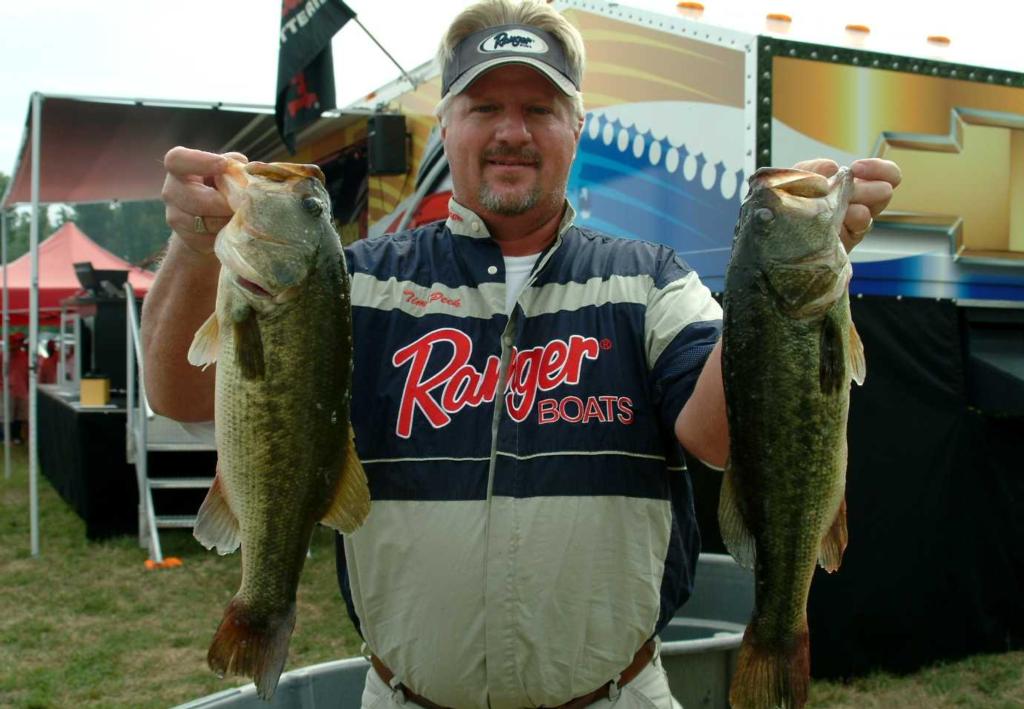 WOODBRIDGE, Va. – Since graduating from the Wal-Mart BFL to the ranks of the EverStart Series and Wal-Mart FLW Tour last year, Tim Peek has made the top-10 cut on both tours four times already. So it was no surprise to see the pro from Sharpsburg, Ga., take control of the opening round of EverStart Northeast Division competition at the Potomac River Thursday and grab the lead by more than 2 pounds.

Peek, who grabbed his first pro win in April in EverStart Southeast Division action at Lake Eufaula, caught a nasty five-bass limit Thursday weighing 17 pounds, 11 ounces to seize a commanding lead on the Potomac with a two-day total of 10 bass weighing 32-0. This was his fifth cut made in EverStart and FLW competition – where he fishes as a co-angler and finished second at Lake Toho earlier this season – in just two years.

“This is my kind of fishery. I told my wife that I better come up here and fish this one because I think I can figure this place out,” Peek said. “Taking the lead is great, but just making the top 10 is the important thing.”

Peek’s 17-11 was the heaviest stringer of the day, by far. And he amassed it with surprisingly few fish.

“I only caught five keepers today,” he said. “But I had four fish over 4 pounds apiece.”

It was a slow but steady diet of 4-pounders that he caught mostly on an incoming tide that kept Peek in the game. The last two days, he said he has been making an afternoon run about 20 miles downriver to capitalize on the incoming tide. That’s his moneymaking pattern, but first he spends his mornings closer to the takeoff point at Leesylvania State Park working a shallow stretch along the bank. That’s where he says he’s been getting lucky and catching some unexpected, big keepers.

“I went downriver about 11 a.m. today, but the good news is that I caught three fish off my first place this morning,” he said. “I caught one on a frog, one on a topwater and one flipping. And I had three bites there yesterday morning, too. Tomorrow, I think I’ll stay in there until maybe 1 o’clock.”

One reason that Peek and several other top pros who are running downriver for the tidal bite might want to reconsider their runs Friday is that the tide is changing.

“The problem is that the tide’s coming in later and later,” Peek said. “If we come in at 3 o’clock, it could be too late for what I’m doing. I might lose that afternoon bite. Actually, I’ve got an area up here where I can do the same pattern on a high tide, but it’s a hard situation to find right now.”

With the warm conditions keeping the fishing tough on the Potomac Thursday, it was no surprise that mostly local pros took over the leaderboard. After Peek, nearly everyone else who made the cut could be considered “local,” with six Virginians and two Marylanders filling out the top 10.

Mike Hicks of Mineral, Va., held onto second place for the pros with a two-day total of 10 bass weighing 29-14.

Sitting more than 2 pounds behind Peek, Hicks said he didn’t focus on the tides so much as his fishing spots Thursday.

“I was fishing dirty water yesterday, flipping a jig,” Hicks said. “Today I changed up and threw a topwater and a finesse worm. I’m just fishing two small areas, running back and forth between them. Normally, I’ll run the tide, but this is more of an area kind of pattern.”

Hicks said that he caught all of his fish off wood structure in 1 to 3 feet of water.

“I never fish grass here because it’s such an unpredictable thing. I fish structure,” he said. “I know there are a bunch of fish in there, and I think I can win if I can keep it going.”

Another pro capitalizing on his home waters is Bo Curry of Monrovia, Md. He caught 10 bass weighing 27 pounds, 5 ounces in the opening round at the Potomac to qualify in third place.

“The main thing for me is that this is my home river. I’ve fished it for 20 years,” said Curry, who added that he caught his bass on blue-flecked Wacky Worms and Baby brush hogs Thursday. “I’m just going to some places that I’ve got a lot of confidence in. I don’t rely on community holes at all. These are places I’ve found myself that will produce well if I can get in there. You have to go where there’s a lot of oxygen or a little cooler water than the main river. The area I’m fishing is maybe only 4 degrees less than the river, but it’s a little cooler and that makes the fish get really aggressive.”

Pro Peter Herbst of Arlington, Va., slid one notch down from third place to fourth with an opening-round weight of 27 pounds, 3 ounces. He caught limits both days of the opening round.

“We had a little bit better bite today, but I tried not to wear out my fish,” he said. “I did throttle back after about 10:30 today – after I had my limit.”

Herbst said he used plastics in a little deeper water – 4 to 6 feet – Thursday.

“I’m catching most of my fish close to low tide, so I’m having to wait them out every day,” he said.

Day-one pro leader Michael Hall of Annandale, Va., laid up with an 8-pound, 12-ounce limit Thursday and made the cut in fifth place with a two-day total of 26-6.

“I wouldn’t call it sandbagging, but I was very much aware that I need those fish for the next two days,” Hall said. “But it wasn’t easy. I had company on my spot today. I felt like I was surrounded by vultures waiting to pluck my eyes out. But I still think there are enough fish in that grass bed to win this tournament.”

Possibly redeeming a relatively disappointing performance at the Wal-Mart FLW Tour event here at the Potomac River last June – one that cost him Angler of the Year – pro J.T. Kenney of Frostburg, Md., caught 15 pounds, 8 ounces Thursday and rocketed up the leaderboard to make the cut in sixth place. After a 20th-place, 10-14 limit on day one, his day-two limit was the second-heaviest of the day and gave him 26-6 for the opening round.

Rounding out the top 10 pros to make the opening-round cut into Friday’s competition at the Potomac River:

While he caught three bass for a healthy 9 pounds, 2 ounces Thursday, Jenkins earned the lead by virtue of his outstanding limit Wednesday that weighed 12-2. It was a catch, he said, that he owes to a well-known Potomac River veteran.

“Yesterday, I fished with J.T. (Kenney),” Jenkins said. “He taught me some stuff that I never would have thought of, and I learned a lot.”

While Jenkins said he caught his bass the first day by flipping grass beds with heavy tackle, he switched tactics along with his partner the second day. He fished with pro Ron Wolfarth on day two.

“I threw spinning tackle with 10-pound-test,” said Jenkins, adding that he caught his fish on a Senko. “I wouldn’t have thought about doing that yesterday.”

Mike McDonald of Randleman, N.C., placed fourth for the co-anglers with a 10-bass weight of 18 pounds, 15 ounces.

Rounding out the top five co-anglers was Derek Moyer of Alexandria, Va., with a five-bass weight of 17 pounds, 1 ounce.

Buoyed by a massive 6-pound, 14-ounce largemouth kicker that earned the $210 Snickers Big Bass award on the co-angler side, Jonathan Ceaser of Midlothian, Va., moved into the top 10 in sixth place with a two-day catch of six bass weighing 16 pounds, 12 ounces. His four-bass, 13-10 catch Thursday was the heaviest of the day from the back of the boat.

Day three of Northeast Division competition at the Potomac River begins as the semifinal-round field of 10 boats takes off from Leesylvania State Park in Woodbridge at 6:30 a.m. Eastern time. Anglers’ weights are reset to zero for Friday, and winners in both fields are determined by the heaviest accumulated weight over the next two days.