Out come the big guns 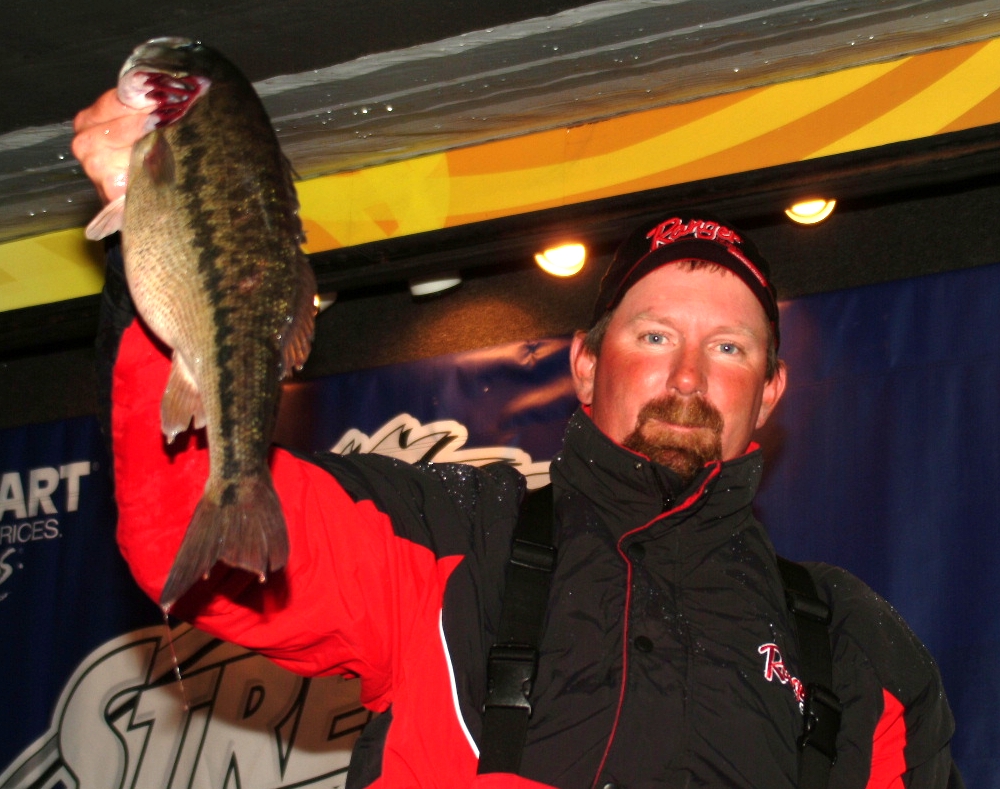 REDDING, Calif. – As the weather deteriorated even further at Lake Shasta Friday, the pros turned it up a notch by cranking out the three heaviest stringers of the week so far. Local pro Jeff Michels of Lakehead, Calif., leads all comers in the first half of the Stren Series Western Division finals with a weight of 18 pounds, 7 ounces, but he’s got company.

An apparent strategy of “laying in the weeds” seems to have prevailed at Shasta this week. Besides pro Jim Riley’s 17-pound, 1-ounce limit on day one, nobody caught anything more than just over 15 pounds the first two days. However, as the finals unfolded Friday, the pros and co-anglers decided to lay into them. Just behind Michels’ 18-7 were Dave Nollar with 18-1 and Mark Meddock with 17-11.

While it’s tough to tell exactly the reason behind the rise in weights because almost everybody caught five-bass limits again – 19 out of a possible 20 limits came in on both the pro and co-angler sides – Michels hinted that many of the top pros were simply saving their better bass for the finals.

“My whole goal coming into this thing was to qualify without burning up any of my big fish,” he said. “So that’s what I did. I qualified by catching all of my fish the first two days with Senkos, then I went out today and threw big baits.”

Specifically, Michels said he caught the bulk of his spotted bass Friday – including a hefty 6-pound kicker – on 3/16-ounce Osprey and Mission Fish swimbaits. He focused on points in both the Sacramento and McCloud river arms, saying he ran up and down the lengths of both.

“On my first point, I caught a 3-pounder, then I caught that 6-, then a 2-,” he said. “On my last stop, I made a cast and had the bait pretty much back in the boat when another big one came up and bit it. I don’t know what to say.”

One aspect that seemed to help today’s leaders was the onslaught of wind. A 20-mph south wind blew all day – along with heavy cloud cover and a chilly rain – and that seemed to turn on the reaction bite for some of the bigger female spotted bass.

“That big wind helps in other ways, too,” Michels said. “It keeps the worm fishermen off the good spots.”

Still, Michels harbors no illusions about his slight lead. Nollar, Meddock and even Gary Dobyns in fourth place are lurking, and their presence heading into Saturday is almost as menacing as the weather.

“There are a lot of good sticks here,” he said, “and those guys are doing exactly what I’m doing. Hopefully, the weather just holds up for me.”

Nollar said he’s fishing a darthead worm with a stinger hook rigged in the back. While he was understandably reluctant to reveal exactly what he’s fishing, he seems to be fishing a different kind of structure than the prevalent pattern of mainlake points, perhaps. Thursday, he admitted that he fished far up the Sacramento River arm, focusing on an area where a warm flow is injecting into cooler water.

“I’m fishing shallow and deep,” he said. “Up there, the key is the warmer water in there.

Meddock, an accomplished young pro from Woodland, Calif., uses customized swimbaits. He said he threw those swimbaits exclusively Friday to land in tight contention in third place with his limit weighing 17 pounds, 11 ounces.

He has also been thanking the heavens every morning when he shows up at the lake to see the overcast skies, rain and wind.

“I’ve been getting these fish to bite as long as the weather stays good like this,” Meddock said. “These big spotted bass love to eat when there’s nasty weather out there. They’re just sitting out there waiting to spawn and getting ready to eat. And I’m feeding it to them.”

Dobyns, the veteran pro from Yuba City, Calif., earned the fourth slot with a limit weighing 13 pounds, 1 ounce. Sitting over 5 1/2 pounds off the lead, he has doubts about his prospects of making a comeback Saturday and winning his second Stren event.

“Man, on this lake that’s pretty big,” he said. “It would take some pretty solid fish on this lake, but I’m getting better everyday.”

Dobyns has professed to catching his fish on swimbaits, ripbaits and spinnerbaits this week, which he says plays right into his strengths.

“When you fish reaction baits, you tend to get bigger fish,” he said. “I don’t think I can win, to be honest, but I’m looking forward to it and having a lot of fun tomorrow.”

Bill Townsend of Redding claimed the fifth-place spot for the pros with a limit weighing 12 pounds, 9 ounces.

Rounding out the top 10 pros fishing in Saturday’s finals at Lake Shasta:

All of the top-10 finalists caught limits Friday.

Powers, who fished behind pro Clayton Meyer, said he caught his fish using a variety of baits ranging from tubes, Senkos and drop-shots to Spider jigs and Texas-rigged worms. His catch included a 5 1/2-pound kicker bass that, depending on who you asked, was either a largemouth or spotted bass.

“I thought it was a spot, but they’re saying it was a largemouth,” Powers said. (Background: Some of the spotted bass in Shasta are so big that it can be tough to tell them apart from largemouths. Some discussion ensued Friday whether the huge, 8-pound, 7-ounce fish that Justin Kerr caught on Thursday was just a nice largemouth or, rather, a near lake-record spotted bass.)

Powers is a two-time runner-up in Western Division competition, and he’s looking to rectify that situation Saturday.

“I’m having a lot of fun. I’ve just fished with some outstanding guys,” he said. “With Dave Nollar, we had a great time today, and I hope I draw him again tomorrow. I really do.”

All of the top 10 co-anglers also caught limits Friday.

Day four of Western Division competition at Lake Shasta begins as the final-round field of 10 boats takes off from Bridge Bay Marina at 6:30 a.m. Pacific time Saturday. Friday’s weights carry over to Saturday, and each division’s winner will be determined by two-day combined weight.