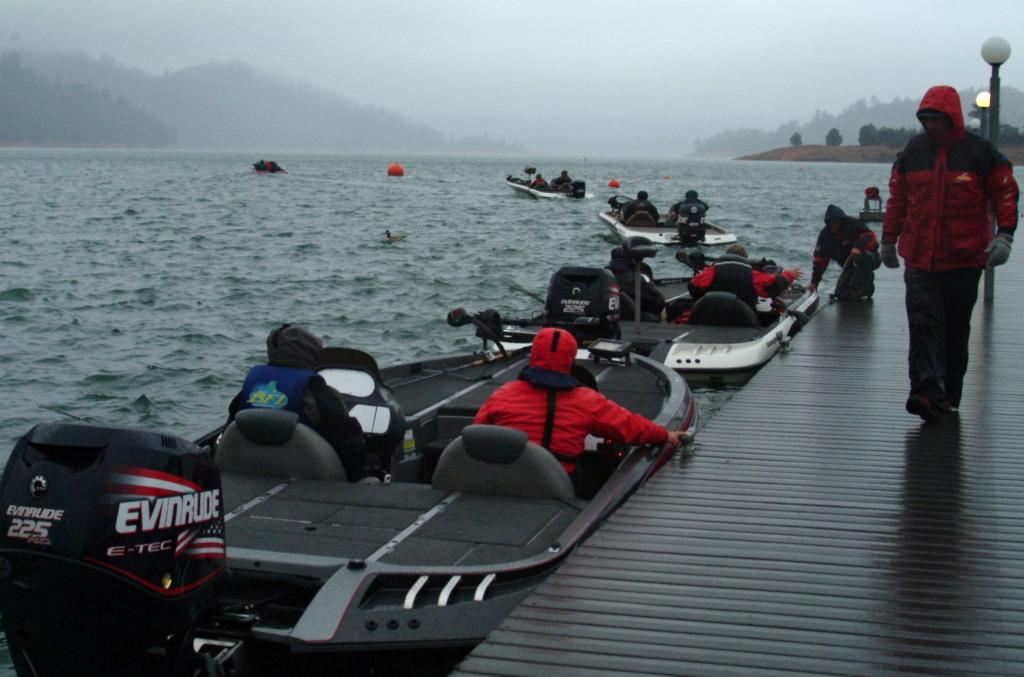 A driving sleet greets anglers at the Bridge Bay Marina dock on Lake Shasta Saturday morning as they line up to take off for the final round of Stren Series competition. Photo by Jeff Schroeder.
Rain, sleet, wind persist for April Fools’ Day finals at Shasta; few laughing
April 1, 2006 • Jeff Schroeder • Toyota Series

REDDING, Calif. – Pro Division anglers are fishing for as much as $60,000 and the co-anglers are going for as much as $35,000 in the Stren Series Western Division finals, but everyone running around on Lake Shasta Saturday probably deserves some combat pay, as well, as they battle the merciless last throes of winter in the hills of Northern California.

Sure, most of the anglers don’t seem to mind the grungy weather here because, after all, that’s what seems to be making the prespawn spotted bass of Lake Shasta bite so well. But after a week’s worth of cold, rain, wind and, now today, sleet, you begin to wonder at what point it’s really worth it.

“You know what’s going to happen?” laughed ninth-place pro Gene Gray through the hood of his parka Saturday morning. “The sun will come out this afternoon as soon as we get in our trucks to head to Wal-Mart.”

Sun? That’s a difficult concept to grasp after this week. But it likely won’t matter much because nasty conditions have been the status quo all tournament long, and catch records have been set, after all.

In fact, under windier conditions Friday, the pros pulled out their swimbaits and turned up the heat in the first half of the finals by catching in the top three limits of an already productive week. Local pro Jeff Michels has the edge with 18 pounds, 7 ounces, but Dave Nollar and Mark Meddock are right behind him with 18-1 and 17-11, respectively.

For the co-anglers, it’s perennial top-10 finisher Dan Powers in the lead with 13 pounds, 12 ounces.

And with Old Man Winter still kicking up a fit with wind and sleet, of all things, the fishing will probably only improve Saturday.

That is, if the anglers survive the run.

Both the pro and co-angler winners will be determined Saturday by two-day combined weight.

Saturday’s final weigh-in will be held at the Wal-Mart store located at 1515 Dana Drive in Redding beginning at 4 p.m. Pacific time.